Day 95’s thing I’ve never done before came courtesy of Mother Nature. It was the first time I’d ever seen a blue moon, which is the 13th full moon in a year, and it only happens every two or three years. In 2009, a blue moon happened on New Year’s Eve.

The weather was cloudy, so the moon was difficult to see. And much to my dismay, the blue 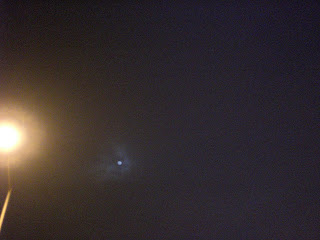 moon wasn't blue at all.

Still, I tried to point out the blue moon on the way to see Widespread Panic on New Year's (also something I've never done before), but no one seemed to care.

In fact, my friend Lisa has made fun of me since that night, saying I was going on and on about the moon like a science dork in the cab on the way to the concert. I wasn't trying to be nerdy, I just thought it would be nice to share what I had recently learned with everyone else.

When people say, "That happens once in a blue moon," you'll now know that they mean, once every two to three years. You're welcome.

Seeing Widespread Panic on New Year's Eve at Phillip's Arena is pretty standard practice in Atlanta. The band has played there for several years, taking a few years off here and there. I've seen Widespread Panic many times, but never to ring in the new year, so I was happy to check it off the list of things I've never done before. It was great. Everyone was in a great mood, and feeling festive. The band played an entertaining show, including a rocking midnight cover of Michael Jackson's "Wanna Be Startin' Something." 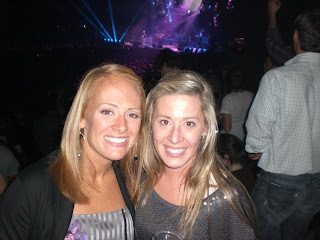 While at the concert, I ran into my friend Shelley, who is not in any of these pictures because I unfortunately did not have my camera when I was with her. We were standing by the bar talking when Shelley waved at someone walking towards us. As the girl got closer Shelley realized it was not the person she thought it was. She laughed at herself and said, "Whoops, I thought that was my friend Erin."
We continued our conversation.

The girl that Shelley had waved at, who I will now call "Crazy" walked over to us and accusingly said to Shelley, “Did you just wave at me?”

Shelley smiled and said, “Yeah, sorry, I thought you my friend Erin.”

Crazy took a step closer to Shelley and said, "Yeah, well I'm not Erin, so maybe you shouldn't wave at someone unless you're sure it's who you think it is."
And then Crazy walked away. 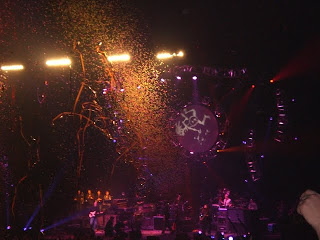 My jaw dropped to the floor. Shelley looked at me with wide eyes and a huge smile and said, “I am SO glad that you were here to witness that because no one would EVER believe that it happened.” True, had I not been there to see it with my own two eyes and hear it with my own ears, I wouldn't have believed that it went down the way that it did. The hate and venom with which she spoke was unlike anything I'd ever seen before.
Day 95’s thing I’ve never done before should’ve been to punch Crazy's lights out. Who gets so mad about a mistaken wave? On New Year's Eve? She must've had a really bad 2009.

I spent every trip to the bathroom looking for Crazy so that I could give her the stink eye, still so perplexed by her behavior. I'm the most non-confrontational person that I know, I've never been in a fight in my life, so the chances of me actually starting something with her? Very slim.
But seriously, wouldn't starting a fight as something I've never done before be fun?
Posted by Stephanie Gallman at 9:00 AM