When I started this blog project, I called it a gift to myself. By me, for me. If others happen to read and enjoy it, great. If not, who cares? I’m writing for me! I promised myself I would not obsess about what other people think about it.
I totally lied.
Since starting, I have become virtually consumed by whether or not people are reading it and if they like it. Up until Day 120, the only way I could tell was if there were comments left behind.
Checking comments on the blog has replaced checking my phone for a text message from a guy that I like. Instead of kicking that crazy, unfulfilling habit altogether, I've just replaced it with a different psycho behavior. That's healthy, right? Only when a boy doesn't text message me, I can safely assume he doesn't like me. When no one comments on the blog, a whole list of assumptions abound. Was the entry poorly written? Not funny? Stupid? Or worse, offensive? Sometimes I'll log into my email just to make sure there isn't a message waiting for me from my mom or dad saying, "You've really crossed the line with this one." 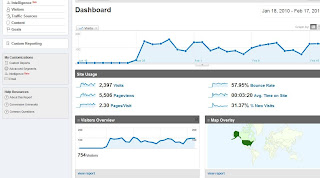 I can usually assume which entries are going to incite a reaction from readers. When I am most reflective and most transparent about my feelings (during the Polar Bear Plunge and Changing Relationship), readers usually relate, share their own stories and extend their sympathy and well wishes.

The downright ridiculous ones always get a large response too, which is completely understandable. Who doesn’t like to see me make a fool of myself Dating in the Dark, Slap 100 strangers high-five or learn how to Play the Banjo?
Other times, though, the entries that garnered heavy response seem completely random. When I made gingerbread and dropped it off at the fire station on Days 71-72 , I wasn't expecting a conversation about whether or not the fireman who answered the door was Jewish.
Likewise, electing health insurance seemed like a pretty lame Day 45 to me, but people really wanted to talk about their own health insurance and FSA's.
And though I definitely didn't expect it, I was pleased when the Pro-Gmail brigade came out in high numbers commenting on the blog (and on Facebook) on Day 27 when I succumbed to the pressure and changed email addresses. Thanks for proving my point and your loserness, Gmailers. Well done.
There are several that didn’t get the response that I expected or wanted. At. All. The Haunted House, for example. By far one of the most emotionally draining experiences, not to mention some of my best writing. Only two responses? Weird.
So, as if the emotional turmoil of checking the blog comments wasn’t enough, my friend Carrie (of the Wedding Crash and Crossfit challenges), mentioned something called Google Analytics. “You must install this on your blog if you haven’t already,” she said, shortly after I began my journey.
Obviously, at that point, I had not. I was still reading “Blogging for Dummies.” Google Analytics? Come again?
Google Analytics is a tracking tool that can be installed on a blog and used, I presume, if someone wanted to show potential advertisers how much traffic their site is getting. Carrie passed along explicit instructions on how to install Google Analytics on Project 29 to 30. Four months and five tries later, with the help of my friend Emily, on Day 120, I finally installed it correctly as the thing I've never done before.

The lapse in time that it took from her telling me about the tracking system and me successfully installing it turned out to be a blessing, because now, thanks to Google Analytics, in addition to obsessing myself with writing the blog, checking the comments on the blog, I've kicked my obsession with this project into another gear.
At midnight every night, the site updates my report and lets me know how many total page views the blog has had that day, which pages were most read, and what cities and states are reading it the most.

If I was a site seeking revenue from advertisers, the Bounce Rate would matter (that's the length of time someone stays on the page versus "bouncing" to another), but I just want people to log on to it and read it. In big numbers. From every country.

Is that to much to ask? 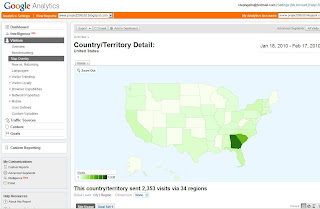 The map with a country, state, and city breakdown is my favorite. I like maps in general, but the Google Analytics map allows me to see where the page views are coming from.
As of Wednesday, February 17th, Georgia is leading the state count, with 1,030 page views since January 25. South Carolina is in second place with 588 page views. No big surprise with either of these since I live in Georgia and I grew up in South Carolina.
Rounding out the top five are Florida, New York, and California (I think California would've been ahead of New York, but Elizabeth is out of the country this week). I was aware, I thought, of who was reading my blog and where they were from, but I'm fascinated that people in states and countries where I thought I knew no one (Montana, Arizona, Iowa, Missouri, Pakistan) have visited Project 29 to 30.

That's right, someone in Pakistan read it. Once. Well, there is a good chance they clicked on it accidentally, but Pakistan is shaded on my Google Analytics, which thrills me in ways I am embarrassed to admit.
Shout out to all of my other international friends in the UK, Spain, Netherlands, Canada, New Zealand, France, Costa Rica, South Korea, Phillipines, Hong Kong and Sweden. Keep on reading and pass along the good news to everyone you know.
Most of referrals to my site have come from Facebook or Google (people Google me!). Other blog friends have sent traffic from their blogs to mine, so I feel it only appropriate to return the favor. Lindsey (77 referrals) www.nicholsfamilytree.blogspot.com/, Nicole (36 referrals) http://www.nicoleklane.blogspot.com/, Emily (30 referrals) http://www.emilysnewsroom.blogspot.com/.
There are so many things that Google Analytics can do and tell you about who is looking at your 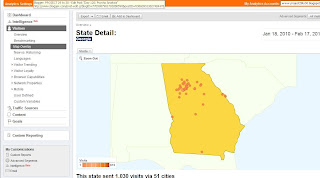 blog, but I think I've probably demonstrated the level of psychoness that I have gone, so I'll stop.
If you would like to install it on your blog, I can put you in touch with my friend Emily because let's be honest, I have no idea how to do it. I have set a goal to try and get 1000 page views per week. I'm averaging about 103 page views per day (usually 120 on the weekdays, 60 on the weekends), so I need to get around 50 more views per day to achieve that goal.

I'd also like to be able to shade every state on the map, so if you know anyone in Maine, West Virginia, Wisconsin, Mississippi, Indiana, Minnesota, North or South Dakota, Idaho, Wyoming, Alaska, Nevada, New Mexico, Kansas or Oklahoma, help a girl out.
"Tweet this mother out," as my friend Lauren always says.
In all honesty, I am truly humbled and flattered that anyone would take 5 minutes out of their day to support me in this quest to do something I've never done before and help me navigate my year from age 29 to 30.

At the end of the day, I did do this project for myself and if all of you stopped reading it, I'd like to think I'd still do it anyway. Regardless of when you joined me on this journey, I want you to recognize that I've tried to make the blog as entertaining and inclusive as possible, even referencing and linking to past blogs so that there is always proper context on the more recent challenges and all the characters in my life.

Yeah right, get serious, it is also the most shameless and obvious ploy to get page views and if you’re still reading, I sincerely apologize (but not really) for subjecting you to it.

I just want people to like me!!! And I want more page views!!! And comments!!!
Posted by Stephanie Gallman at 10:35 PM