For the first couple of weeks in January, Atlanta was hit with freezing temperatures and some snow. The city literally shut down. I couldn't even get my friend Lisa to go get a facial with me or come to the movies.

"It's too cold," she responded in a text message. 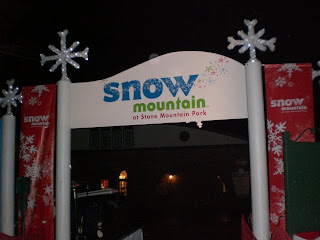 I'm not sure if it's ever too cold for a facial or the movies, but Lisa's sentiments about the weather is shared by many southerners. The rare times it does snow, instead of getting out to enjoy it, many of us prefer to hole up at home. That is, after our school classes and church services are cancelled and after we've raided the grocery stores for plenty of bread and milk.

In our defense, there isn't a lot of equipment to clear the roads in the south, making driving scary. Plus, this kind of weather is not what we signed up for. We tolerate the extreme heat in the summertime so we don't have to deal with the extreme cold in the winter.

In Georgia, we like our snow manufactured. Manufactured, and contained to a specific place that we can all drive to in 50 degree temperatures. We want to put our snow gear on in the car and walk (not hike) on a paved parking lot, through a lodge-like concession area to Snow Mountain at Stone Mountain park. 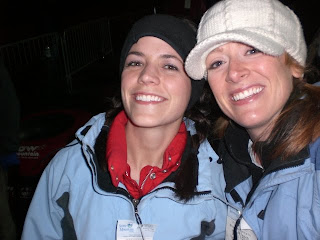 And if we're going to play in it, we want to make an appointment to do it.
Day 112's thing I've never done before was to go tubing at Snow Mountain, a snow attraction at Stone Mountain.
The first time my friend Emily tried to make us reservations to go to Snow Mountain, she was shut out. All the reservations were gone. Snow Mountain is apparently a popular attraction in Georgia. What is popular is not always good, but in this case, it wasn't just good. It was great.
One of my co-workers has three kids and when I told her my friend Emily had suggested we go, her eyes lit up as she told me how she had taken her kids a couple of weeks ago and how much fun she'd had. She said even after her kids were over it, she was still tubing without them. Still, like other experiences I've had, going to Snow Mountain was not well received with any of our other friends.
When I asked two friends if I could borrow their ski pants for this activity, they both were happy to hand them over, but confused about my reason for needing them. "You're going to that?" one friend said, referring to the super cheesy commercials that promote it. 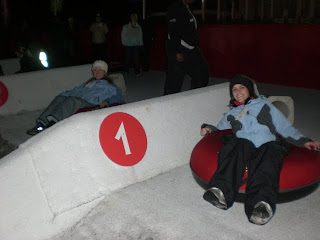 Like the Internet, spray tanning, and I don't know how Snow Mountain worked, or how it was even possible that they built his hill with lanes for tubing, but they did. They also had a "lift" much like the moving sidewalks in airports that lifted tubers up to the top. We grabbed our tubes and headed to the top.
We followed the staff's instructions and each chose a lane right next to each other. The friendly workers positioned the tubes in the center of each lane, and gave us the rules (which they annoyingly told us every time we went), "Hold onto the gray handles at all times. If something falls out on the way down, do not try to retrieve it. We will get it for you and bring it to the bottom."
And then they gave us both a little push, sending 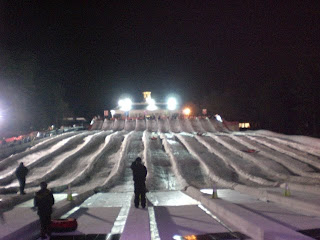 us flying down the hill. I completely wanted to take pictures or video on the way down, but it was impossible. We were flying! And squealing like we were on a roller coaster.
The first time we went, once we got to the bottom, we both jumped up to get back in line to go again.
Emily and I both had our hair in pigtails and we were laughing like giddy little schoolgirls. Each time we got to the top we carefully chose with lanes we wanted, based on how fast we thought they would go (at the end of the night, we agreed the ones on the very far left are the fastest). Then we started racing each other to the bottom.
We're 29.

With all of the small kids tubing alongside us, I assumed that the whole experience had Pumpkin Patch/Christmas Tree Farm potential. More suitable for families. 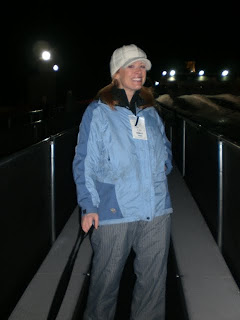 But I was wrong. It was awesome. And fast. And AWESOME.
After we were done with the tubing, we walked down to the snow area where they would take a snow blower and "replinish" a little mound of snow where small kids were making snowmen, and having snowball fights. This part was not really for adults, and we didn't stay for very long. I had to laugh at some of these little ones who were likely born and raised in the south who now probably think all snow comes from a machine that only spits it out for two minutes, every 15 minutes.

Of all the family friendly activities I've done for this blog, Emily knocked it out of the park with this one. I would definitely go back. Like now. I would go back now.
In fact, I booked a trip to Lake Tahoe shortly after this night, so I'll soon be playing in real snow. And now I have my own ski pants (those entries are coming, I promise).
Posted by Stephanie Gallman at 1:00 PM