This blog is all about resisting the urge to sit at home or to do what I've always done. Sometimes these adventures are planned, and sometimes I just like to see where the day takes me and when someone offers me something to do, I do it.

Day 104 was not at all planned, but it turned out to be full of things I'd never done before.

Starting first at Andrew's house, where I escaped the awful winter weather. There was snow and ice all over the ground, so everyone was pretty much hiding out in the city. Snow in the south seems to lose its appeal after a couple of days in the south and by Saturday, I was over it. So I went to Andrew's with no real plan of doing anything. 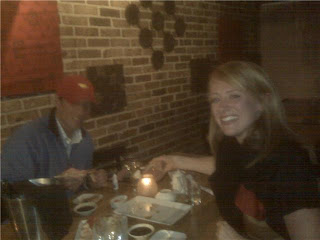 I hadn't seen Andrew since the Blue Moon Widespread New Year's. But we hadn't really talked in months. We have the kind of friendship where we won't see each other in months, and then we spend one dinner catching up on three months of time. This was our catch up day, and all of a sudden day 104's thing I've never done before was drink wine in the middle of the afternoon and tell the story of Mountain Man, and the trip out west. Again.

We got about half-way through the story, when we realized we needed more wine (the story requires copious amounts of alcohol, I find). When we returned, I took a tumble on Andrew's driveway, learning the hard way that high heels and white snow are not a good combination.

Normally I would've jumped right up and tried to play it off like I didn't just face plant in the snow, but I couldn't. The fall was like a metaphor for the week I just had, and 2010 so far. I just sat there, feeling completely defeated by his snowy driveway, and by life, and laughed. Andrew did too. We laughed so hard we couldn't speak. I think I cried I was laughing so hard, which is on my list of top five favorite things to do.

At some point I got up, brushed the snow off my pants and managed to get back inside the house without killing myself so that I could continue Stephanie's Life Story Over the Last Three Months, Part II.

After the marathon storytelling, we decided that dinner was in order. So we went to eat sushi at a little place near Andrew's house. I managed to make it down the hill with no more spills, miraculously.

Andrew walked into first sushi restaurant we had planned on going to. I was following him. He took two steps into the place and turned immediately around with a weird expression on his face. He said, "Yeah, let's go somewhere else."

I laughed because I thought he was kidding. 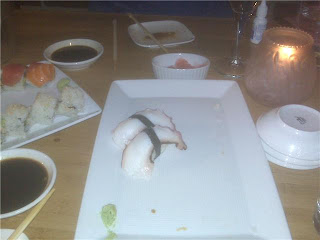 But he wasn't and started walking quickly to his car. He explained that when he walked in he saw a girl he went out on a date with and didn't want to deal with seeing her again. I've seen this scenario in movies and on television, but I had never seen it happen in real life.

I tried to get him to tell me what really happened with the girl, but he refused, so I dropped it. Maybe he was embarrassed to be seen with me? Nah, that couldn't be it.

Regardless, we moved on to Taka sushi restaurant and I decided to purposely order octopus off the menu as the next thing I'd never done before.

Once again, another metaphor. This big, beautifully presented piece of fish that looks like it could be tasty, but turns out to be a whole lot of effort for not a lot of payoff. Octopus doesn't taste like anything but rubbery nothing. Not worth it. At all. If I'm going to have to chew on a piece of fish until my jaw hurts, I'd like to enjoy the taste of it. I wasn't completely grossed out, I just didn't understand the appeal.

After we ate sushi, I ignored my friend Maribeth's advice and watched the film, 500 Days of Summer. She said the film would depress me, but I thought it was great. I actually thought it was hopeful. "You Make My Dreams Come True" by Hall 'n Oates also happens to be one of my favorite songs of all time, too, so I especially loved the spontaneous dance scene in the park.

Day 104 was falling in the snow and eating octopus, seemingly unrelated events that all felt like metaphors for my life. 2010 was not off to a great start.
Posted by Stephanie Gallman at 8:06 PM