I got back from Mansfield late Friday night, just in time for an enormous snow storm that dumped a foot of snow over most of Ohio. Most of my friends back in Georgia had already made plans and I was sort of down upon my arrival. Airports bum me out for some reason. 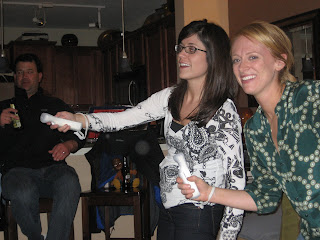 I talked to my friends Emily and Lauren. They, along with their husbands, invited me to dinner and then to play with one of Emily's Valentine's Day presents from Scott. Wha? First of all, while I appreciated Emily's wanting to include me in her weekend plans, playing with her Valentine's Day present from her husband had creepy written all over it. And secondly, Valentine's Day wasn't for another week. I was confused.

I resisted my urge to go home and sit on my couch and went to Emily and Scott's instead where I learned about this present. Scott was apparently so excited about one of his presents to Emily that he didn't want to wait until Valentine's Day for her to open it. He wanted her to have it right then. That’s how strongly he felt about this gift. His present turned out to be a gift for us all, so I'm glad he jumped the gun. It also became Day 131's thing I’ve never done before: Play “Just Dance” on Wii.

If you think “Just Dance” sounds familiar, it’s probably because you’ve seen their commercials featuring home videos of different families all shaking their money makers for the camera. The ads are hysterical.

I have accidentally been caught on camera dancing at weddings and I’m always mortified. Watching myself in these scenarios always gives me huge amounts of anxiety. The thought that someone would willingly set up a video camera to record themselves dancing is both foreign and hilarious to me.

On the other hand, I love to dance. I was a trained and competitive dancer for years, so I should have no problem with this game. Maybe the world is ready to see my moves. So for the sake of the blog I allowed Scott to film us playing it, also something I’ve never done before.

The game is a lot of fun. There is a digital figure on the screen that does a dance and your job is to mirror what the digital figure is doing. The movements aren’t difficult, and they repeat a lot, so by the end there is potential for knowing the entire routine.


Because you’re holding the Wii “controller” in your hand, the game scores you based on your ability to closely mirror the digital figure’s moves.

Piece of cake, right? Only it’s not. I was winded, embarrassingly so, while dancing and some of the moves didn’t come naturally to me. 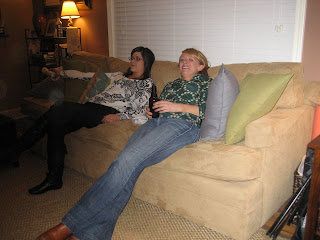 Not to mention, I've watched these videos that I'm about to post and I'm not as good of a dancer as I thought I was. True, I had never played this game before and new things are always a challenge, but the overall performance is lacking. I was, and am, a little concerned about my dance abilities after watching these videos. I need to get back in the studio in a big way.

Scott started by shooting the videos from the back. My dancing doesn't look attractive from any angle, but especially not from a rear view. Emily and I demanded him to reposition himself in front of us if the videos were going to be blog-worthy. I think you'll agree the videos tell the story far better than I ever could, complete with Scott's commentary and Donald's toe-tapping.

Watch the confusion on our faces and witness the hilarity. And Just Dance everybody!

Posted by Stephanie Gallman at 11:59 PM