On Day 132, I had plans to go out on a first date with a guy I met at a friend's engagement party. I guess the entire evening with this new person was the thing I've never done before, but in the spirit of not making this a dating blog, I'm not going to delve into the details of him, or the date necessarily. I also am not in the business of making people a part of this blog without their permission, so like Mountain Man, I asked my friend Emily to name this new guy for me. Emily named this gentleman (and he was a gentleman), "Masters" because he golfs and he's from Augusta. 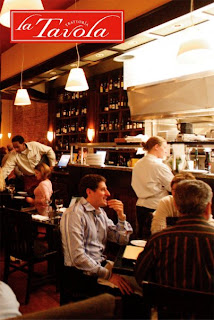 When it was settled that we would go out on Saturday, Masters politely asked for my help in choosing a place for us to go to dinner, which I appreciated and dreaded all at the same time. Nice that he wanted me to choose, but daunting because what if I chose a restaurant that he hated or was too expensive?

I'm not looking to drain anyone's bank account on a first date, but I've mistakenly led guys to believe that I'm super low maintenance and laid back, waiting too long before telling them that I really do like nice dinners at expensive restaurants.

Better, I figure, to reveal my true personality up front. Not all the crazy stuff, but at least the part that likes good Italian.

Plus, I thought, it's a date and I wanted it to feel that way, so I threw out three suggestions of nice and moderately priced restaurants and threw it back to him to choose where we went (tricky, huh?). Lucky for me and for the blog, Masters chose La Tavola, making dining there Day 132's thing I've never done before.

La Tavola is an Italian restaurant in the Virginia-Highlands neighborhood of Atlanta. The restaurant came highly recommended for good reason. The food and atmosphere are awesome, in an unpretentious but super classy way. The place is small and intimate, which I liked, but since there isn't much of a waiting area, and we didn't get seated right away, we had to do the awkward "not-sure-where-to stand" dance around each other and around the tables of other people.

That dance was a small price to pay for the evening, though, because once we we escorted to our table and had a place to sit down, the awkwardness subsided, the conversation flowed and our meal was fabulous. And that's all you get. I told you this isn't a dating blog.

Posted by Stephanie Gallman at 12:00 AM