During a work meeting a few weeks ago, a male colleague turned to me in conversation and referred to my blog casually as my, "life as a single girl living in the city."

"Well, actually, that's not really what my blog is about," I retorted. "I mean, I am single, but the blog is about me doing stuff that I've never done before."

My colleague nodded and smiled indicating he understood what I was saying. But I was not convinced that he believed me. 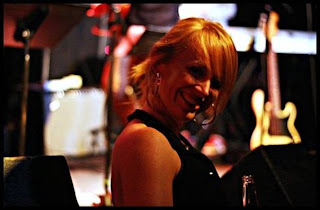 Long after this exchange ended, I analyzed his comment further (because that's what I do). I went back and read some of the entries I had written trying to figure out how he had come to this conclusion about the blog. Did he just assume that's what it's about, or am I coming across as a lonely, depressed girl seeking love and companionship in Atlanta? Perception is reality, so what is the impression that I'm giving?

Let me make it clear to everyone that this blog is not about my quest for love or the ups and downs of my relationships. I've left a lot of that stuff out, as a matter of fact. My being single is just one element of my personality, but I don't think that it's the most interesting thing about me.

Besides, I think someone already wrote a book about being single in the city. You've probably heard of it.

On the other hand, if I was married, or in a relationship, I wouldn't have the opportunity to participate in many of the things that I have. So at the risk of making this blog about my love life, or lack thereof, Day 121's thing I've never done before to sign up for online dating.

My friend Amanda at work, who reads the blog regularly, made me promise that when this day came, that I would consult her. She moved to Atlanta by way of several cities, one of which was New York, where she did a lot of dating online.

I dreaded this day, because I'm completely weirded out by online dating. The whole act seems so dorky, so desperate. But I considered the apprehension I felt to joining Facebook and Twitter and I wondered if making an online dating profile would be the same. Maybe it would be difficult to admit to doing it, but once joining, I'd probably realize that a lot of people have accepted this way of meeting new people. We lead busy lives; this is the way of the future.

My adventures so far this year have proved a lot of my preconceptions wrong, so maybe online dating would be different, better than what I thought. After all, I used to assume that 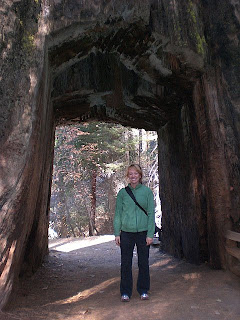 there had to be something wrong with any woman who was 30 and not married. Now that I'm about to be one of those women, I'm changing my tune on that too.

Another friend, Erin, said online dating is by far one of the most entertaining things she's ever done. The responses, the crazies, the potential for blog-worthy material is high.

So, time to throw out all of my preconceptions about online dating and sign up.

Or, as this case may be, let Amanda sign me up.

We decided, after a brief discussion about which site to join (there are several out there), that Plentyoffish.com was the site for me. Plentyoffish.com is one of the few (maybe the only) online dating services that doesn't charge you anything to join. Perhaps that's why it's completely superficial. There's no personality test, no deep soul searching, just answer a few questions, upload some pictures, and that's it. In fact, the information profile that I filled out (actually Amanda filled it out for me) didn't take very long at all.

Plenty of Fish feels like the MySpace of online dating. I'm not sure they don't exist on the paying sites, but because this site is free, I got the feeling instantly that there are a lot of creepers looking for love or other weird stuff.

I thought choosing pictures would be the hardest part, but thanks to having a Facebook account, I already had an arsenal of photos to choose from.

I sent Amanda a picture and she approved. But she said I'd also need a full body photo. This sounded creepy to me, but she explained that it's pretty well known in the online dating world that if you only upload pictures that only show your face, guys will assume you're fat. Wow, I had so much to learn.

I gave her two pictures and she chose another two. Nothing fancy. I went with flattering pictures that actually looked like me, but indicated my interests as well. Music, check. Travel, check.

"Now we need a screen name," Amanda said, now standing by my desk, I was thinking, "Easy Like Sunday Morning?"

Great song, sure, and I'd like to think I'm "easy," though not in the way that some guys would like me to be. We sat there, staring at each other. Why is a screen name so hard? Well because it's one name, one chance to tell potential suitors something about myself. What about just my name? Amanda said definitely not. I only should give my name to people that I wanted to.

Amanda continued on the music route and eventually returned to her desk to search Phish songs. I thought this was funny, because I do like the band, but I'm not sure any of their song titles would be appropriate. And I'm a fan, not a SUPER fan.

Meat Stick? Yeah, no.
Drifting? I certainly am a drifter, more now than ever, but drifting also says, "flaky."
Finally, we abandoned that idea and went with: DayOneTwentyOne, since that's the day I went online dating as the thing I've never done before.

After some of these big decisions were made, Amanda got to work writing my profile. She sent it to me before she submitted it to the online dating masses: I am Seeking a: Man
Yes, a man is what I'm seeking. I've dated too many dudes lately, I need a man!

For: Friends
Because saying "husband"or "someone to adore me and make all of my dreams come true," just seemed like it was a little too much.

Do you drink?: Socially
She could've said, "Every chance I get," but that might've attracted the wrong kind of man.

Marital Status: Single
Yep. What else would I be? Isn't everyone on this site single? No, I learned in Part Two of this little experiment, they are not.

Profession: News Junkie
Vague, but accurate.
Smarts: Bachelors degree
Do you want children? Undecided/Open
I laughed out loud at this because I wondered what some of the other options were: "YES! PLEASE! RIGHT NOW! MY CLOCK IS TICKING!" or "HELL NO! KIDS ARE THE DEVIL."

Do you do drugs? No
Not out in the open, anyway.

Interests: concerts, traveling, running, road trips
I have a lot of interests, but this is a good overview, I suppose. Plus, I find it's better to wait until date #3 to reveal my insatiable interest in jeans and reality TV.

After the general questions, I had to fill out a biography. Amanda said she would do that too.

"You should always have someone else write your profile," she said. I like this challenge. So far, all I had done was tell her how tall I am and when my birthday is.
This is what she sent:

About Me:
I like music and getting drinks with my friends... But who doesn't? What you really want to know about me is that I laugh a tremendous amount, and it's infectious. I answer the phone constantly at work and I can hear the people on the other end smile when I say hello. I wear great shoes. I love the south but don't think it defines me. I never like to do the same thing twice. I'm a great adventurer, not because I recently tried espresso for the first time or that I'm trying to never wear the same outfit twice, but because life is much better lived doing something new. The entertainment, education and spontaneity of life keeps me going every day. You must have the same drive or else we’ll fall flat. 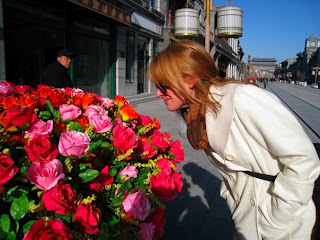 I do like music, I do like getting drinks with my friends and I do laugh a tremendous amount. I never knew that my laugh was infectious and I'm not sure I've ever heard anyone on the other end of the phone smile when I've said hello, but it's definitely nice to think about. Last sentence is my favorite. Amanda and I have never talked about it, but she nailed my feelings about the south. I'm happy that I was raised here, but it's not necessarily what I'm all about, and if the right opportunity came along, I would move, and I'd take my southernness with me.

Actually I do like to do the same things twice, three, even four times, if they're fun things. She's obviously referring to the blog on this one. Trying espresso, yes, that's true, though I'm not sure trying new things makes me a great adventurer. As for the outfits thing, that's all Amanda. She never wears the same outfit twice, which I find both fascinating and awesome. I tried not wearing the same outfit twice for one month, and succeeded, but I'm done with that. I wouldn't have ever said it, or written them in my online profile, but I agree with the last two sentences. Life constantly surprises me and a guy with drive is a must.

First Date:
Impress me with your musical prowess and introduce me to a band I've never heard. Take me to a bar I've never been to, or order me a drink I've never tasted. Talk with me, not at me. Don't wear tapered jeans and leave your man purse at home.
Again, she kept the blog in mind here, with the things I've never done before. A guy that has bad taste in music is a huge turnoff for me. I've never dated a guy who wore tapered jeans or a man purse, so I don't have strong feelings about either. Actually I do, but I think this makes it sound like I've been on tons of dates with dudes who dress badly, which I have not.

Bottom line on this whole online dating thing: Amanda was right when she said you should always have someone else write your profile. She made me sound cool. After reading what she wrote, I wanted to date me.

I wonder if any of the other fishes will want to date me too. We shall see...Part Two is only days away.
Posted by Stephanie Gallman at 3:00 PM