The Guinness, and all the drinks that came before and after made for a very lazy Saturday. But I refused to let the sun go down on Day 125 without doing something that I had never done before. 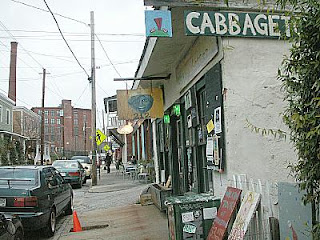 So when my friend Maribeth called me to see if I wanted to go to dinner, I suggested Carroll Street Cafe in Cabbagetown, a small neighborhood east of downtown Atlanta. Going to Carroll Street Cafe was not the thing I've never done before, since I've been there several times. But what about a Cabbagetown Pub Crawl for Day 125's thing I'd never done before, I suggested to Maribeth while we were sitting at the bar. Maribeth was in.

The trouble with a pub crawl in Cabbagetown is that there are only like five bars there, and most of them are restaurants that had already closed before we were done with dinner. So while we attempted the pub crawl, we really only made it to one other place, Milltown Arms Tavern, a cool, laid back spot. The only other bar that I knew of that was open was around the corner and not within walking distance.

I know the attempt is what this blog is all about, but failing at a pub crawl is failing in life, I think.
Posted by Stephanie Gallman at 10:56 PM