My parents came to Atlanta for a visit in January. I was happy to see them, they’re a lot of fun, but I'm not sure their visit was the best thing for my anxiety. They called me a week in advance to tell me they were coming, and when they showed up, I soon learned that success of the weekend rested solely on my shoulders. 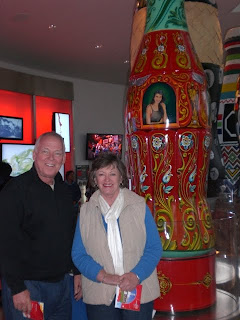 I asked them what they wanted to eat and my dad threw his hands in the air, exasperated, "Stephanie, we don't live here. I don't know where we should go."

Yes, Dad, I'm aware that you don’t live here. I was more looking for some guidance. Are you thinking Mexican, a sandwich, pizza?

Still nothing. Luckily I chose correctly, and they enjoyed their lunch.

After lunch it was more of the same. Did I mention they told me they were coming? I assumed they had an agenda.

Should I have planned activities for us to do? The weather was crappy. I’m pretty sure my dad didn’t want to cruise the mall and my mom didn’t want to sit at a sports bar. I was at a loss.

She mentioned the World of Coca-Cola. I drove the car straight there. And that became Day 111's thing I've never done.

The World of Coke recently moved from its first location in Five Points to Centennial Olympic Park, where there is a complex of tourist attractions. The Olympic park, The Georgia Aquarium, the CNN Center, and the World of Coca-Cola are all right there.

After we bought our tickets, and “we” here means my dad, we headed into the tour, which kicked off in a room full of Coca-Cola advertisements and display cases full of Coke memorabilia. Our tour guide welcomed us to the World of Coke and began quizzing us on Coke trivia. 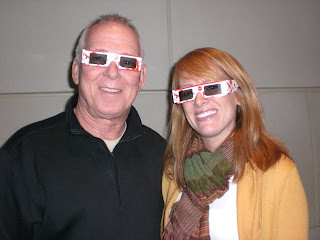 Do you know when the best time of day for a Coke is? Anytime!

Once a tour guide myself, I criticized this tour guide's delivery and how her voice rose several octaves higher at the end of each sentence she spoke. Her voice annoyed me, but others thought she was hilarious.

After her part of the presentation, we went into a theatre where they showed an animated cartoon that was supposed to show us what happens when you put your change into the vending machine to get your ice-cold Coca-Cola.

I'm all for appealing to the kiddies, but this film was ridiculous. Stupid. I would've preferred animated characters dancing around while drinking Cokes. Instead, these filmmakers tried, and failed, to tell a story and pretend like the inside of a Coke vending machine is like a construction zone where several fictional creatures all put together the perfect soft drink. Waste of time.

I knew that the hefty $15 entrance fee likely went to help pay for this little disaster of an animated feature and I was annoyed by that too.

After the film, we were free to roam about the museum, walking through exhibits that described the history of Coca-Cola, the sponsorships Coca-Cola has been involved in over the years, and the bottling process. I walked slowly, only because my parents were checking it all out, but I found a lot of it to be less informative, more like an advertisement for Coke products.

The history of how the drink was concocted was by far the most interesting to me. Pharmacist John Pemberton concocted the caramel syrup and it was first served at a local pharmacy's soda fountain to be served with carbonated water.

Some cute kid staring at one of the displays shouted to his parents, "I can't believe this really happened!" and it made me laugh out loud. 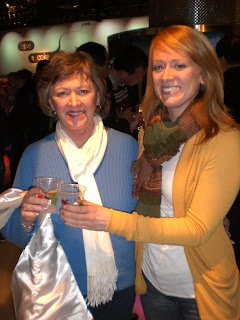 If this kid is this excited about a sugary soft drink, wait until he learns about the Founding Fathers and the Constitution. Take this kid to the Freedom Trail and blow his mind!

We continued through the exhibits and ended up at another movie. This one was 4-D. Whoa, first Avatar and now my first 4-D movie, within weeks of each other?

The fourth dimension meant that in addition to wearing the glasses, feeling like you’re a part of the action, the seats also moved and there were wind and water effects. Cool, I guess. But the actors were dreadful and the storyline, the quest to find what Coke’s secret ingredient is, was again ridiculous and stupid.

This movie did not make me want to drink Coca-Cola. It did, however, make we want to travel to all of the places the scientist goes to try and find the recipe. Again, more wasted admission money on this lame production.

The best part of the museum, by far, is the last room were plastic cups are provided and we were turned loose on several soda fountains full Coke products from all over the world.
I tried a lot of them, most of which weren't particularly memorable or tasty.

I did remember the Beverly from Italy because it is disgusting.

The greenish one from South Africa was a bit of a surprise at first, but quite tasty. I think my teeth could've possibly been rotting after one sip it was so sweet, but I liked it.

There really is nothing better than the real thing, Coca-Cola Classic. 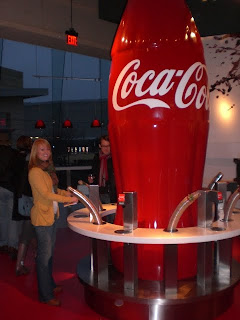 Just like all self-respecting tours, this tour ended in the Coca-Cola gift shop, where we found t-shirts, coasters, key chains, dishes, glassware, all covered with the Coca-Cola logo. Seriously, who really wants a purse made out of Coke can tabs? Apparently a lot of people. The store was packed full of tourists with fistfuls of souvenirs. I do remember when Coca-Cola logo tees were popular. I was in elementary school. Are they on the way back and I just didn't know?

We left the museum in the cold, rain and I couldn’t help but feel lame about the entire experience. The weekend, the museum, my parents. I texted several of my friends afterwards telling them, "I just went to the Coca-Cola museum with my parents. Kill me."

Later that night, we went to Floataway Cafe, a fabulous restaurant tucked away in an industrial park in the most random neighborhood in Atlanta. Seriously, fellas, this restaurant is the equivalent of a beautiful girl who plays hard to get. Hard to find, completely unapproachable and aloof, but once found, rewarding, cool, and delicious. Again, ending on the upswing.

True, there are many things I can think that I'd rather be doing than spending a rainy Saturday touring my parents around Atlanta. But I could do a lot worse. A lot.
Posted by Stephanie Gallman at 9:00 AM