Day 127 had arrived and like many Mondays, I had no idea what the blog activity was going to be. I cut it close. Truthfully, I was in full-on planning mode for Day 128’s thing I’ve never done before, that I forgot about Day 127.

Just before 7pm, Justin came through with the winning suggestion. “Why don’t you name a star?”

I like the idea of owning a piece of the constellations, but I can’t really name a star after myself.

The only star that I want named after me will be the one on the Hollywood Walk of Fame after I star in the Lifetime original movie, Project 29 to 30, (co-starring Meredith Baxter Birney, who will dye her hair brown and play my mother).

So, I decided to buy this star for someone else. But who was worthy of such an "out-of-this-world" gift? 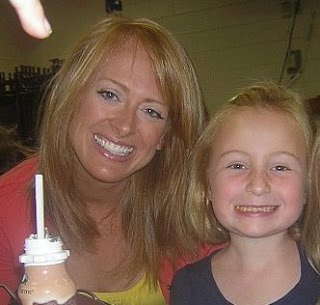 My friends would appreciate it, but likely just for five minutes and only as a joke. My parents would chastise me spending my money on something so ridiculous.
And then it became clear. My 7-year old "niece," Karson. Karson is my childhood best friend Danielle's daughter. She's not really my niece, but I love her as if she was and she's the only person I can think of that would appreciate it this as much as I did.
Karson will always be special to me because I was in and out of the hospital room when she was born and she's a redhead despite her parents both being brunettes (like me). And she's hilarious. And she adores me. Because I'm her aunt and not her mom, I let her do whatever she wants, but since she has the same hair color as me, when the three of us are together, people assume she's mine and that I'm a bad mother.
I logged on to the site http://www.nameastarlive.com/, where I quickly realized there are several levels to star naming. For $19.95, you can name the star, register the star’s name, and launch the star’s name and message into orbit. For $39.95 you can do all of that and get a cuddly teddy bear. What? Karson has plenty of teddy bears and I found these two things to be completely unrelated and just another way to charge me more money. I think $19.95 is plenty.
The fact that I was even on this site was a big step, because I really hate everything that has to do with space. I realize this is completely un-American of me, but I feel better just getting it out in the open. I know that there is value to NASA, I just don't know what it is and when anything involving shuttle launches, landings, the International Space Station comes on the news, my eyes glaze over and I check out. 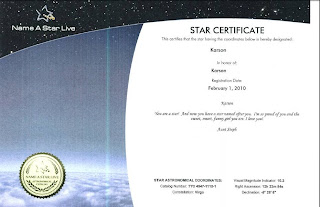 I named the star Karson, and said, "I'm so proud of the sweet, funny, smart girl you are. You're a star!"
And she is.
I texted her mom, and said, "You're never going to believe what I just did. I bought Karson a star!"
Danielle loved it and thought it was sweet. I hope she doesn't think it's less sweet because now I'm writing about it on the blog. She called me when Karson opened it and said she's not sure if she really gets it. But she said Karson collapsed on her bed in surprise when Danielle told her what it was. I'll take that as a success. A success that was captured on video, but for reasons far beyond our comprehension (like space), unfortunately cannot be sent from Danielle's phone.

If I had an unlimited amount of money and didn't have to go to work, I would make this blog about doing nice things and buying unexpected gifts for people, because there is truly no better feeling than surprising others with random acts of kindness. It's somewhat selfish, actually, because I'm sure that $20 star probably gave me more joy than it gave Karson. And I hate space!
Posted by Stephanie Gallman at 12:00 PM