A few weeks ago, I got a text message from my friend Mitch that said, "Watch Mad Money today, I'm asking a question on the air!" I had heard of this show, but never actually watched it.

Mad Money is a show about investing in the stock market, and it’s hosted by financial guru Jim Cramer. Cramer is a high strung, fast talking, theatrical character who shouts at his viewers about when to sell! When to buy! When to hold!

When I tuned in to watch Mitch ask his question (which was really cool), I was annoyed by Cramer and what seemed like a lot of theatrics and a lot of yelling. Still, Mitch is a finance guy. He has been since we were in high school. So, if he trusts what Cramer has to say about investments, I believe that he knows what he's talking about. Since I really didn't pay attention the first time around, I decided to give Cramer another try. 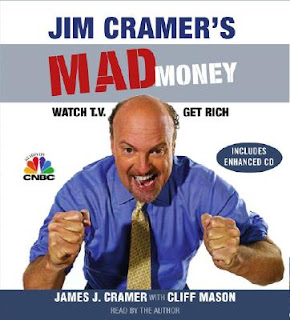 In addition to hearing about his show, I also remembered hearing about Cramer last year at the height of the financial crisis. The Daily Show host Jon Stewart accused Cramer for advising his viewers to participate in short sales, which he says is detrimental to markets and investors. Stewart went on to criticize CNBC for not doing enough investigative journalism to uncover the Ponzi schemes before they got so out of hand. I’m not sure I agree that Cramer or CNBC are to blame for any or all of the bank failings and subsequent bailouts. In fact, I’m not sure I understand what he’s saying at all. Ever.

Watching this show was like watching a Micro-Machines commercial on repeat for 60 minutes. Cramer runs around his colorful Disney-looking set full of lights and gadgets and shouts words and phrases, few of which I understood. He did throw out the phrase, “Boo yah!” which made me smile, even though I was unsure of the context.

Even when Cramer engages his audience, callers try to ask their questions as quickly as Cramer answers them. My head was spinning.

During this particular show, Cramer told his audience that they should look at the toys their kids are playing with and make their stock purchases based on those technologies. Seems logical, only I don’t have kids and I have no idea what technologies create the most popular toys. I could see myself searching wildly on the Internet for “Stock in Wii.” Can I even do that?

Cramer slowed down briefly to interview a guest, but my brain was so happy to have a break, I don’t really remember much about what was talked about.

The popularity of Mad Money tells me that Cramer must know what he’s talking about. I'm can only assume that this show is more for seasoned investors and not for people trying to learn about investing.

In fact, I felt myself getting anxiety bout not only Cramer’s delivery, but also because I didn’t understand ¾ of what he is talking, and I feel like I probably should.

Perhaps more time with Cramer and Mad Money and I might get there, but with the bells and whistles and noise, it’s a commitment I’m not sure I’m going to be able to make.
Posted by Stephanie Gallman at 2:45 PM

Email ThisBlogThis!Share to TwitterShare to FacebookShare to Pinterest
Labels: Mitch