Day 113: Participant in a Dream

When I was in grade school, I always loved that I'd return to class after the two-week holiday break for a few full weeks, only to get another long weekend the third week of January. Never mind what the day off was for, an extra holiday simply meant an opportunity to go skiing with friends or a chance to sleep in a Monday. 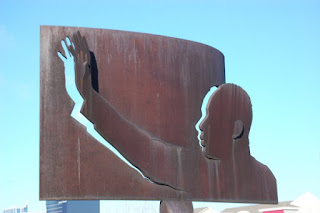 The third Monday in January was Martin Luther King Jr. Day and what better way to celebrate Day 113 then to recognize this day for the first time in my 29 years. Day 113's thing I've never done before was to attend the MLK festivities at the King Center in downtown Atlanta.

I shared my plans with friends that Monday morning.

"That celebration is a really big deal. I think Clinton is supposed to be there," my friend's husband Scott said to me.

I did understand that the Martin Luther King, Jr. celebration in Atlanta would be a big deal. I had forgotten, though, about the big names, like Bill Clinton, that such a celebration would attract.

I hustled downtown anticipating heavy traffic and lots of people if, indeed, a former president was going to be in attendance. When I got close to Auburn Avenue, where the King Center historic site is, I noticed it and other streets surrounding it, were closed and barricaded. I parked as closely as I could and started walking. 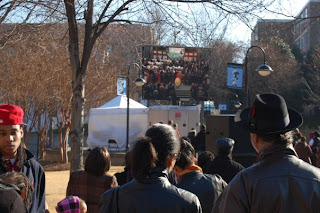 The weather was beautiful that day. Brisk, but sunny. Everyone that I walked by seemed to be in a great mood. I was greeted with several, "Good mornings!" I walked through street vendors that had lined the roads. They were setting up tents and booths, which suprised me. I thought the commemoration of such an instrumental Civil Rights leader would've been more regal. More serious. This was like a street fair. More of a celebration of his life, less about his untimely and tragic death.

The historic Ebenezer Baptist Church is undergoing renovations, so the day's service and festivities moved to the larger Ebenezer sanctuary. Regardless, I did not make it in time to get a seat. I was in good company, however. There were several people milling around the historic site.

Organizers planned ahead for those of us who wouldn't be able to get in, and set up a screen outside so that we could watch what was going on during the service.

While standing outside, I ran into a colleague, who had stopped by to take pictures on his way into work. We walked around the grounds of the King Center together. I had never been there, but he had, and knew where to go.

Inside the King Center, there is a representation of the Civil Rights movement that I found particularly moving. Statues of figures on a road marked with all of the cities that Dr. King took his message. At the other side of the road was the actual wagon that carried Dr. King's body through the streets of downtown Atlanta after he died. 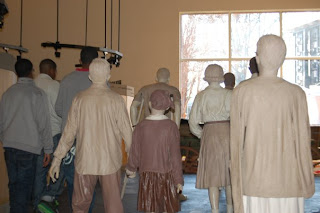 After my friend left, I took a seat on and listened to all of the speakers. United States Senator Johnny Isaacson and Atlanta Mayor Kasim Reed were among them. Civil Rights activist and Princeton professor Cornel West delivered the key note address.

I looked around and found it it odd that in 2010, I was in a small minority of white people that attended this celebration. I paused for a moment to consider that there are probably many people out there who don't view the advancements of Dr. King worthy of celebrating at all.

There were several families that braved the chilly temperatures to participate in the festivities. I found myself distracted by one frazzled dad with two young sons who were not at all interested in the speakers and what was really going on. They were laughing and running around, enjoying the park, too young to really understand the legacy of Dr. Martin Luther King, Jr. But I was proud of this dad for bringing them and hoped this would become a family tradition at least until they were old enough to understand what it was all about. 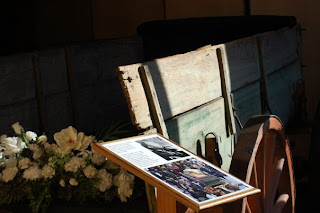 Many of the speakers involved in the ceremony spoke about how happy Dr. King would've been to see an African-American be elected to the highest office in the country. But all seemed to agree that electing a black president was just one part of the fulfillment of Dr. King's dream.

I eventually had to leave to get to work, but I walked back to my car with a spring in my step, feeling good about having made myself a part of this day, and sure that I would never let another third Monday in January go by without recognizing what the holiday is all about.

Neither George nor Bill Clinton were at Monday's MLK festivities in Atlanta, but I was there. And I'm so glad.
Posted by Stephanie Gallman at 1:01 PM

Email ThisBlogThis!Share to TwitterShare to FacebookShare to Pinterest
Labels: Scott