After she got back from her honeymoon, my friend Carrie, whose wedding I crashed back on Day 49, started emailing me about accompanying her and husband Whit to one of their Crossfit classes. She had mentioned it to me before their wedding, but after the first of the year we were finally able to settle on a date.

Day 114's thing I've never done before was to attend a Crossfit class. 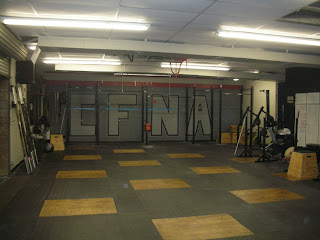 I love new workout experiences for the blog because it allows me to check "physical activity" and "blog assignment" off my daily list of things to do at the same time.

Carrie warned me that the class was early, and it was. I left my house at 5:30am to get there at 6am. It was still dark outside. She did not warn me that the gym was right behind a Chik-fil-A restaurant. What a cruel joke it is, I thought, to drive away from working out smelling fried chicken biscuits.

Carrie reads the blog regularly and knows what other workouts I've participated in. She said, after Day 56, that kickboxing was going to feel like a walk in the park after doing Crossfit.
No offense to my kickboxing friends, but Carrie was right. Crossfit is no joke.
According to the Crossfit website (which I should've read before I went, but did not), their exercise program focuses on high intensity and functional movements. Carrie explained to me that every day the work out is different.
The Crossfit gym reminded me of a no-frills high school weight room. Cement brick walls, a lot of mismatched equipment, even wipe boards with names, weights and times on them.
The instructor told us to run a couple of laps around the parking lot while he wrote down a handful of exercises on one of the wipe boards. When we were done running, he explained what he had written, and then told us to get started. There wasn't a great deal of instruction, and we were sort of left to complete three sets at our own pace. I looked to Carrie and Whit, who further explained what I was supposed to be doing.
During the warm-up, which didn't at all feel like a warm-up, 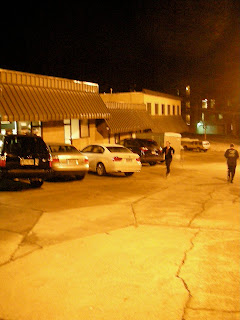 I started to think Carrie and Whit were mad at me for crashing their wedding and this was their way of getting back at me. We were doing crab walks across the full length of the floor, kettle ball swings, pull ups (seriously, I hadn't done a pull up since completing the Presidential Physical Fitness test in elementary school). It was hard. Really hard.
While finishing the warm-up, the instructor wrote new exercises on the board. Once everyone was finished, he explained that today's workout would consist of three sets of three exercises. Lunges, forward jumps and then sprints. He said we could stay inside the gym, or we could go outside to complete it. I opted to go outside.
The movements weren't, by themselves, difficult. Doing three sets of them in succession was, however. About midway through the "real" workout, I started thinking that they weren't mad at me, Carrie and Whit hate me and they are enjoying watching me suffer. My lunges were extremely wobbly towards the end, my forward jumps were like spastic bunny hops. Sprinting for me was more like jogging and it felt like my legs were just flopping around independent from the rest of my body. I look like I'm crying in some of these pictures, but I was not. The real pain came later.
As some of the more stellar athletes were completing their three sets, the would run into the gym yelling, "Time!" At first I thought they were showing off, which I found annoying, but then I realized everyone was doing it because the instructor was timing to see how long it took to complete the exercise.
I had to get the full experience, so when I finished my last sprint, I also yelled "Time!" It was probably more like a strained whisper at that point, but good enough for the instructor to hear and write down my time. I forgot to write down what it was exactly, but I think I finished in about 20 minutes or so. Not anywhere close to first, but not last either. 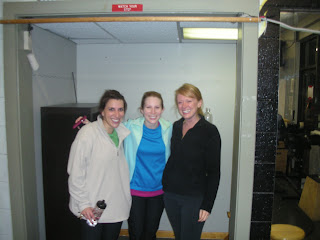 In any situation where someone invites me to their gym or to their exercise routine, my biggest goal is to not embarrass them or myself. I think I handled myself pretty well. Carrie and Whit still talked to me after it was over, too, so I think we're all still friends.

At the end of the workout, we stood around talking to one of Carrie and Whit's fellow Crossfitters. Carrie explained to her that I have a blog and that I'm trying to do something that I've never done before every single day for one year.

The friendly girl smiled and nodded her head and then paused.
"Wait," she said, "I heard about your blog this weekend."

I first thought she was mistaken and that there was probably someone else with a blog similar to mine. But she went on to say that heard about my blog during a girls' weekend in Charlotte, North Carolina. And then we made the connection. My college friend Katherine had also been on this girls' weekend and told everyone around it. It's a small world, especially in the blogosphere.
I'm forever grateful to Katherine and all of my friends who continue to tell their friends about my experiment. It's flattering and exciting to get new readers.
I'm also grateful for this class, which was definitely the jump start I needed to get going in 2010. I may do a little more stretching after the next class because I had difficulty walking for five days after Day 114. I was sore in places I didn't know existed. I need to work out like this more often.
I hesitate to say Crossfit is fun. What's fun about crabwalking at 6am? But I was done with working out by 7am, which was awesome. And it was fun to hang out with Carrie and Whit in a non-crashing their wedding kind of way. If they'll have me, I willl definitely return to Crossfit.
Or maybe we can find some other way to hang out.
Posted by Stephanie Gallman at 9:00 AM