Day 122's thing I've never done before is I've taken a Bikram yoga class at Decatur Hot Yoga. Bikram is a practice that does the same 26 poses in sequence in a room heated to about 105 degrees. I've taken "hot" yoga classes before, but not specifically Bikram.

I prefer active exercise that’s more active and gets my heart rate up, but I do believe in the benefits of yoga and the mind/body connection. I also know I need to focus on making that connection now more than ever, as my mind seems to always be racing twice the speed of my body. A class like this should be good for me. Plus, with the heat cranked to 105 degrees, I was certainly going to sweat out all of my body's toxins just like I would if I was running. 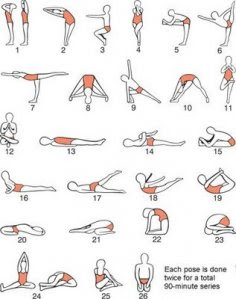 I'm always intimidated in any exercise class that I've never participated in and this time I was on my own. No seasoned veteran to tell me what to do or how to act. I chose a spot as close to the side and as far back as possible.

I sized up the class and immediately spotted an older gentleman without his shirt on. I immediately thought of my dad. Not because my dad would ever take his shirt off in a yoga class (at least I hope he wouldn't), but because he had recently started taking yoga (or YO-gah as he calls it).

Once the class got started I realized No Shirt guy was also a very heavy breather. Some of the postures called for audible breaths, but he seemed to take it a little far. I, again, thought of my dad and the last (and only) time I ever went to the gym with him. He was working out with a personal trainer at that time. Every time she would instruct him to do something, my dad would moan and carry on like she was torturing him and putting him through excruciating pain. I think he was just doing it to be funny and to put on a little show for his trainer and me, but I was still embarrassed. I wondered if he did this in his YO-gah classes.

My dad eventually hurt his back, pretty badly during YO-gah classes. Pretty awful, since the entire reason he starting taking YO-gah was so that he could improve his flexibility and alleviate back pain he was already having. Now he is taking Pilates (PilaTaze, as he likes to say). Hopefully that will work out better for him.

Why am I telling you this weird story about my dad's workouts? Because this is how my mind works in classes like these. Besides every yoga instructor’s reminders to leave all of life’s distractions at the door and come in a commit to the practice, I can't seem to do it. I should let the silence and peace relax my mind and body, but instead, my mind fills up with all of the things I made myself forget about. The mind/body connection is lost on me. 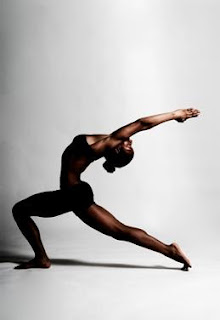 "Stop it, Stephanie," I told myself. I forced myself to focus on my Bikram instructor and engage myself in the practice. I was going to find my Zen if it killed me. My instructor was visibly pregnant and she could do all of the poses far better than I could, even with what looked like a basketball under her shirt. I wondered if this extreme heat was good for her and the baby.

Although, I'd argue hard that the room was not the promised 105 degrees.
Again, not exactly making the mind/body connection. I went on to wonder about all of the yogis around me and how often they come to class. I thought about what I was going to eat for lunch that day, and how I was going to write about this on the blog.

Because the same 26 poses are used in Bikram, the instructor allowed us to do each 2-3 times, which I liked. I've taken yoga classes where I don't ever have the opportunity to master a pose before we move on to the next one. I was able to gain stability where I needed it most before we went to the next series. On the other hand, I paid $16 for this class and the room was nearly hot enough and we didn't do Downward Facing Dog pose once. Whattha?
The greatest part of the class, at all of the classes at Decatur Hot Yoga, is the end when we get to lie on our mats in the dark and spend several minutes just breathing and relaxing. The instructor comes around and places a cold wet washcloth that smells like Eucalyptus on our foreheads. A perfect end to the class, if only I could've relished in its peace.
I blame myself for this class being a bit of bust. I have got to find a way to turn my brain off from the distractions in my life and focus on practicing yoga. I have the other 22.5 hours the day to think about all of the other things going on in my life. I should let that hour and a half be just about me and making the mind/body connection.
Is relaxing something I can learn? Can someone teach me?
Posted by Stephanie Gallman at 3:52 PM

Email ThisBlogThis!Share to TwitterShare to FacebookShare to Pinterest
Labels: Dad