This picture was taken in 2011, a few weeks before my 31st birthday and two weeks after I was diagnosed with depression.  That's a shower cap on my head and I was surrounded by my friends and colleagues while out for a drink after work. 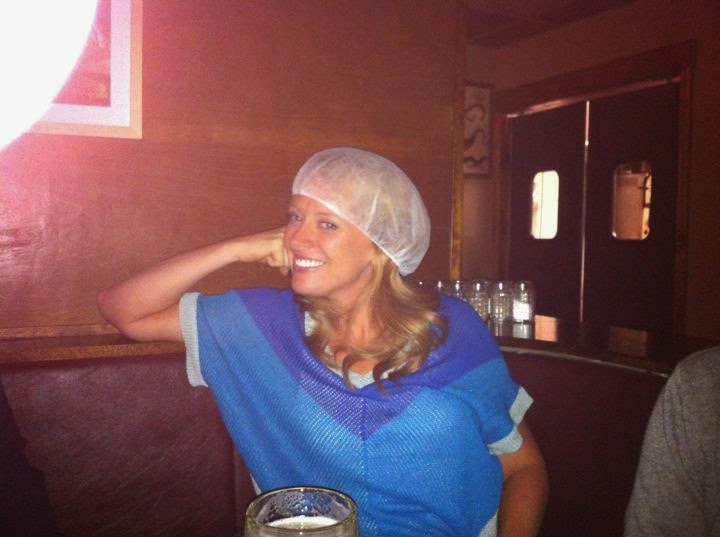 I often was the funny girl.

I was also severely depressed.

I wrote about my diagnosis for CNN.com - about being the life of the party, the girl who tries new things, a Wal-Mart hula-hooper.  I denied that I could be a depressed person - because I didn't identify with what I thought a depressed person looks like.  In light of Robin Williams' death, the article was resurrected last night.  While I'm a little embarrassed at the attention the old article is getting, so many of the points I made back then still apply now.

The irony (that's irony, right?)  that someone who brought us so many laughs was himself so depressed is a concept with which I am all too familiar.

Like so many other diseases, mental illness does not discriminate - it affects people young and old, black and white, rich and poor - even the people who make us laugh the hardest and most often.  Sometimes, it's the funniest people who are in fact the saddest, as Jim Norton points out in this poignant Time article.

"The funniest people I know always seem to be the ones surrounded by darkness. And that’s probably why they’re the funniest. The deeper the pit, the more humor you need to dig yourself out of it."

I'll reserve words like "devastated" and "heartbroken" for my family and friends - people I actually know and love and don't just watch in movies, but I feel so profoundly sad that mental illness has claimed another - and this time someone as spectacular as Robin Williams.

He will live forever through the iconic roles that he played - as the genie in Aladdin, as Mrs. Doubtfire and Peter Pan, as Doctor Sayer in Awakenings and Professor Sean McGuire in Good Will Hunting.

May he finally rest in peace.

If you are depressed or have had thoughts of suicide, please seek help. Here are a few resources:

National Suicide Prevention Lifeline
National Alliance on Mental Illness
Depression and Bipolar Support Alliance
American Psychiatric Association
You are not alone.  It does get better.

And like Professor Sayer said, "You'll have bad times, but they'll always wake you up to the good stuff you weren't paying attention to."
Posted by Stephanie Gallman at 11:13 AM 9 comments: