My friend Amanda at work told me a story recently about meeting her mom at the mall to run some errands ahead of her upcoming wedding. Their plan was to meet right at 10am, when the stores opened. Amanda said she was surprised to find out that the mall was opened well before 10am and that there were people actually there exercising. 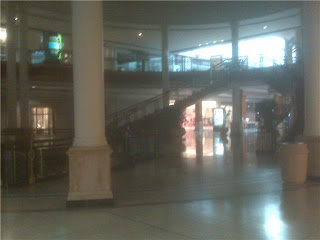 I laughed. I had heard of senior citizens walking the mall but I didn't realize they came out in such high numbers, and I assumed they walked the mall during regular business hours. I didn't know the mall opened early to accommodate this need.

Amanda joked, "We should walk the mall for your blog!"

Hell yes we should.

She sent me an Outlook Meeting Maker titled, "Walk that Mall, Girl," and I quickly accepted it.

On Wednesday morning, I drove up to Phipps Plaza in Buckhead. It was sunny outside, but pretty chilly, so I was certainly glad we were going to be taking our exercise indoors. I was really hoping that we would be among the masses of seniors who woke up early to walk, but there was only one other older lady there. Too bad.

So we walked. And we talked. We solved all of the world's problems, which is what I always tend to do when I exercise with a friend.


Amanda logged on to the Phipps Plaza website and it has a little blurb specifically for mall walkers. One lap around Level 1 and one lap around Level 2 is one mile. We were up and down on both levels so many times I lost count but we were there for about 45 minutes.

I forgot my camera, but had my work Blackberry in my pocket, so we asked a couple of custodians to take our picture. They agreed.

"Ah...sure," one of them said as he took my Blackberry. "Y'all ladies gettin' y'all's fitness on?"

Well, if I'm being completely truthful, I'm not sure we reached extraordinary levels of fitness that day, but it was a great opportunity to catch up with Amanda and do some window shopping before the stores opened. Having the mall all to ourselves was somewhat eery, but fun and if they'd let us shop, I know we could've done some serious damage.
Posted by Stephanie Gallman at 11:28 AM

Email ThisBlogThis!Share to TwitterShare to FacebookShare to Pinterest
Labels: Amanda