Say hello to the redheaded God. No, not me. I mean Trey Anastasio, the front man from Phish, looking ever so dapper in his performance with the Atlanta Symphony Orchestra. 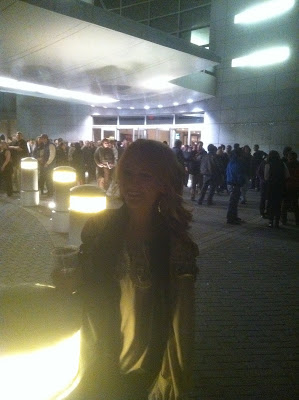 I'd always wanted to go, but it took Trey coming to town to get me to the symphony for the very first time. I am so glad that he did.

When I told non-Phish fans that I was going, or that I went to this performance, I was greeted with exaggerated eye rolls, lots of laughs, and at least one sarcastic, "Of COURSE you did."

True, the stereotypical Phish fan is hardly the same as a stereotypical symphony fan, but this convergence of musical genius was right up my alley. It was Phish, all gussied up. Country club Phish. Phish in high heels, with overpriced cocktails and chairs with arm rests.

But seeing hippies at the symphony was worth the price of admission.

And so was the music. " Stash?" With strings and horns? Yes, please. " Inlaw Josie Wales" nearly brought me to tears. Trey was spectacular and the evening goes down as one of the top ten best live music experiences of my life.

I know, that was a little dramatic. Go ahead, roll your eyes.
Posted by Stephanie Gallman at 10:00 AM 2 comments:

automatic for the stupid people.

I'd like to think that my witty anecdotes and insightful prose are enough to keep people coming back to read this blog now that my 365 adventures are over, but let's face it -- when it comes to blogging, pictures are where it's at.

Two of my favorite bloggers, Kelle and Olivia, update their blogs often and they both take beautiful photographs. I don't think it's a coincidence that they have thousands of followers. They also happen to be beautiful women with beautiful families and friends, so maybe that also has something to do with it.

I've seen pictures help, and hurt, my own blog as well. When I was updating more regularly, the posts that always seemed to garner the most attention were the ones with pretty pictures. The ones with not-so-pretty pictures (i.e. me making ugly faces here, here, and here) were always commented on by my mother.

"Will you hurry up and update so I don't have to keep looking at that picture?," she said once.

I thought that if I bought a fancy camera, the ratio of pretty pictures to not-so-pretty pictures might improve. However much to my dismay, the camera is not magical. And it didn't come with the seemingly flawless skin and impeccable styles of the two ladies whose blogs I admire. Bummer. I never had any unrealistic goals to make a living as a photographer like Kelle and Olivia have. Based on the pictures I've taken so far that goal is completely unattainable. Besides, I'd always planned on making my living off my charming personality and stellar dance moves.

But I did want to understand how my camera works and at least attempt some more interesting photos. So at the end of last year, I, along with my friend Trish who has a nice camera she didn't know how to operate and a toddler whose cuteness demands he be photographed, signed up for a introductory photography class.

Our class is a hodge podge of adults, most of whom, like Trish and me, want to take better pictures. There are a select and perplexing few who told us they signed up for Photography 101 because they want to make a living out of photography. These declarations shocked me. Shouldn't a decision to become a professional anything come AFTER one is trained and has established a skill/interest/gift in said field? Their decision to become photographers BEFORE knowing anything seemed a little drastic, and a lot stupid. Sort of like the equivalent of me waking up and deciding, "I'm going to be a guitarist," and then signing up for guitar lessons. Not to mention, most of those who said they wanted to be professionals seem to know less about photography than Trish and me (and that is saying a lot). My favorite part of the class is, by a landslide, spending time with Trish. She and I graduated a long time ago, but sometimes it feels like we're still college students, acting in the same roles we did when we were in school together.

Trish completes her assignments early and with the help of her skilled colleague, then she calls me to make sure I've completed mine. Trish arrives early to class, organized and prepared; I often get stuck in bad weather or bad traffic, arriving late and frazzled. Trish let me borrow a pen on the first day since I didn't have one, and let me look on her manual when I forgot to bring mine. She furiously takes notes during class and gives everyone "What the hell is he talking about?" looks when he starts going off on a tangent that no one understands.

When our teacher asks us, at the end of a long diatribe about light sensitivity if we "get it," Trish is usually the first to laugh while sarcastically sighing under her breath, "Uh, yeah, sure," eliciting laughs from our classmates.

She also cracks jokes at her own expense when her photos are flashed up on the big screen. Her healthy dose of self-deprecating humor is a welcome relief from discussions about ISO and aperture and everyone in the class loves her. We joked with each other about who would be teacher's pet in our class, but in all honesty, if our photography class had a prom, she'd be Prom Queen, no question about it.

As far as our photography skills go, well . . . let me just go ahead and say once more, Trish is the highlight of the class for me.

All I want is to understand how to take a good picture. I suppose there is value in understanding how the parts of the camera do what they do, and I'm hoping that all of these bits of complicated information will come together in one massive way and suddenly everything he has told us will make sense, but so far, I'm not convinced that’s ever going to happen.

Exhibit A: Girls' Night Out

I brought the camera out a few Friday nights ago to document my mini-college girls reunion many months in the making. The restaurant was dark and lovely and I thought would provide the perfect ambiance for lovely pictures. I eventually surrendered to the automatic setting in order to get at least one group shot. I lost the ambiance, but aren't my friends hot? Worse for my photography than girls' night out was my friend Momo's Baby Shower, Exhibit B: I'd like to mention that I was in no way attempting to get creative with these shots. My intention was to document this special day and all of the hard work that went into the shower so that when Baby Powers makes his/her debut in the world, one day he/she can look back at all the sweet aunties he/she has. The result of my efforts was 59 photographs that were kind of or completely blurry, too gray, too yellow, or just plain terrible. "Maybe you're over-thinking it," Kyle said.

It's certainly possible. Trying to jump ten steps ahead of my remedial level to attempt Annie Leibovitz-like photographs is something that I would do, but I truly wasn't trying to do it here.

Friends near and far and I got a huge kick out of these pictures. I thought I'd have an opportunity to redeem myself on my photography class' field trip to Oakland Cemetery. While not completely certain of the trip's purpose, I was convinced I could get a few shots, while sharing a few laughs with Trish.

After numerous tries, though, my pictures were still equally as terrible as the ones from Momo's shower. Blurry and all wrong. I yelled to Trish, frustrated, "That's it! I'm going to find our teacher." Trish supported this plan, certain that he would have the answer as to why I suck so badly at photography.

When I approached our teacher, it was all I could do not to throw the camera at him and demand that he fix it or fix me.

He looked at the camera, looked through the viewfinder and snapped a picture. His was leaps and bounds better than anything I'd taken, but even he could tell something wasn't right.

"Why are you shooting in Manual Focus?," he asked me.

I nervously laughed, because he asked the question as if this was a personal choice that I had made, when really, I had no idea what setting the focus was in or what he was talking about at all. I'd seriously considered that my camera might've been defective. All of my friends thought that I was either trying too hard or needed to get a refund for this class.

But in fact, the reason that all these pictures are blurry or terrible or both is because moron over here forgot to move the setting back after we played with it in class.

"Well how about that," I said, embarrassed.

My teacher, who already thinks I'm an airhead or stupid or both just laughed and shook his head. Maybe there's hope for me after all. Hope in the automatic focus.

I nearly skipped back to Trish, so happy that it was only my stupidity that caused the pictures to turn out so poorly.

"My camera's not defective!"

"The class wasn't a waste of money!"

As we continued through the cemetery looking for interesting things to photography, I was positively giddy with excitement, as I applied the concepts we learned in class and created pictures that while not necessarily visually interesting were all IN FOCUS. All of them. Tonight is our last class and while I'm looking forward to not feeling like a complete dumb ass every Thursday, I'm going to miss hanging out with Trish and her one-liners. It was a little touch and go there for a while, but I feel confident I understand to better use my camera. For the days I'm not feeling confident, there's always auto, and I'm not afraid to use it.
Posted by Stephanie Gallman at 4:20 PM 1 comment: