Maribeth had a job interview the next day and needed to get home at a reasonable hour. When the band came back for an encore, we decided we'd stay for a couple of songs and then start making our way towards the door. 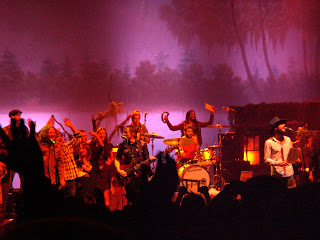 As Ben, the lead singer, thanked the crowd, I noticed people taking the stage, some of them holding song sheets. Some of them I recognized from the Atlanta music scene. A couple members from the band "The Whigs" were standing next to Patrick, an old friend that I've known since high school.

It was very surreal to see all of these people standing together and I was very confused as to what was going on. I think everyone else was too.
Maribeth shared her confusion aloud, "What is going on?"

I said, jokingly, "I don't know. Maybe this is their version of 'We Are the World.'"

I couldn't believe it, but Day 94's thing I've never done before was to see "We are the World" performed live. I had also run in the sleet earlier that day, which is what I was prepared to write about (running in the elements is no fun, by the way).

This unexpected song was way more entertaining. I thought it was awesome.

In fact, the only thing that could've made this performance any better, in my opinion, would have been if Michael Jackson and Tina Turner were there singing it with them. I loved it. I loved it so much that it moved me to become "that girl" at a concert shooting video with her digital camera. I don't know what came over me, but I was giggling like an idiot, holding my camera over my head.


I must've been so happy that I was actually going to have something cool to write about instead of running in inclement weather, I wanted video to prove that it actually happened.

Thanks Band of Horses for such a cool evening.
Posted by Stephanie Gallman at 3:00 AM