The first 100 days of any President's term is always heavily scrutinized. I feel it only appropriate to scrutinize my own 100 days with as much intensity.

So let's take a look back at some of the high and low lights of my last 100 days, shall we?

We'll start with the not-so-great:

Day 5, Eating beets. I later learned that beets can be okay, but this first go round was not a positive experience. It did bond fellow blogger Julie of http://www.julieversusvegetables.wordpress.com/ for life, however. Maybe it wasn't all bad.

Day 23, I listened to entire Nickelback album. Definitely a low light for me, because that band and that album sucks. This entry was quite a hit with blog readers, however, and inspired a lot of comments. I love blog comments.

Day 31, the Haunted House was terrifying. Plus, we fell. We freaking fell.

The highs have definitely outweighed the lows. Here are some of my favorites:

Day 14, I wouldn't say my skills on the banjo were a highlight, but learning to play made for a very fun day and the video is hilarious.

Day 53, I'm not sure if I'd call the experience at Dating in the Dark a "highlight," but the hilarity that ensued is enough to sustain me for a while.

Day 90, jumping into the cold lake that my parents live on for a polar bear plunge was empowering and so far, seems to be a crowd favorite.

All these activities, plus I went to Palm Springs, Yosemite, San Francisco, Boston and New York, too. I've done a lot in 100 days. And I still have more adventures ahead.

Unfortunately, I confess, Day 100 snuck up on me. Despite my lack of planning for this milestone, however, I wanted to try and make it special.

My former boss Ben emailed me when the blog first started and asked me what I was planning on doing for Days 100, 200, 300 and the finale. I hadn't, at that time, thought that I would treat these days any differently from the rest.

But when I learned it was approaching, I emailed Ben, and asked for his help.

He suggested I get a tattoo. I don't currently have a tattoo, and I'm not opposed to them, but my mom would go from #1 fan to non-supporter of this blog in .5 seconds if I got a tattoo, so I decided against this. Plus, I told Ben, I can't think of anything I'd want to stamp on my body forever. 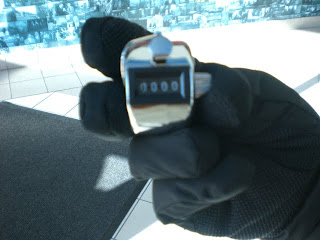 Um, no. The day I get the name of my blog tattooed on my body is the day it will be evident to all that I've given up.

He also suggested a meeting with a life insurance agent, something he had recently done himself. He said talking about his death so openly and honestly to a complete stranger was odd. Ben said the best part of this meeting was the exercise where you audited the monetary value of your life in order to know how much you needed to die. This sounded interesting, but also depressing. I'm not sure I want to know the value of my life according to an insurance agent.

When it was said and done, I ended up coming up with the idea for Day 100 all by myself. I decided to give 100 high-fives as the thing I've never done before.

"Fun!" my friend Lauren said enthusiastically, when I told her what I was planning to do to celebrate this momentous occasion. Then she followed up with, "But what about the swine flu?"

Whoa, way to suck the fun out of a high-five. Is this what everyone thinks about when they go up to give the universal congratulatory greeting? How depressing.

Lauren was not the only one who was conflicted about this idea. The plan was met with mixed reviews. Several people looked at me like I was nuts, but that was to be expected. A handful looked at me like they had just smelled something bad. Something about the thought of me making hand-to-hand contact with complete strangers grossed them out, I guess. I'm not a germaphobe at all, so it didn't occur to me that this project was anything less than awesome.

I didn't consider the health risks of multiple high-fives, and pardon me while I step on my fun soapbox for a moment, but I'd like to think I'm a happier person because of it. My hands may be dirty, but I'm living large and hand-sanitizer free. When I think "high-five" I don't think spreading germs, I think spreading joy. Besides, I got the swine flu shot, so I'm safe.

My colleague Devon agreed to come with me on my mission. Not willingly, I had to persuade him. I really needed a witness to be with me for the main event, and someone to count the high-fives. I also needed him to vouch for me in case anyone became suspicious of some crazy girl roaming the streets of downtown Atlanta asking people to slap her hand. 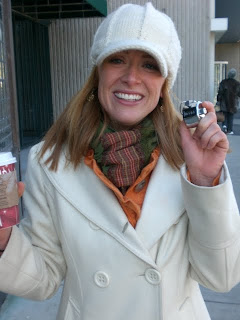 One of the greatest things about Devon is that he attacks assignments with gusto, even when he is forced to participate in them. He bought a counter (like the kind that bouncers use to count the number of people entering a bar) to make sure he counted each high-five fairly. While this may have been a little excessive, the counter has been one of the best purchases ever made for the office. We count a lot of things now, like how many times the same creepy person walks by our desks, and how many times overeager colleagues call us for stupid reasons.

We met at our office building, and then took off downtown to start high-fiving. Devon cursed me for choosing one of the coldest days of the year to complete this task. I admit, the planning could’ve been better. It was freezing.

The challenge was slow-moving at first. The initial approach for a high-five with a perfect stranger is, on all accounts, awkward. But after the first five or six were out of the way, I got into a groove. Pretty soon, I stopped feeling timid about it and just starting going for it.

Most people I approached were confused at first. Some people laughed at me and kept walking. I decided to combine the high-five with a "Happy New Year" greeting. "Happy New Year! High-five!" turned out to be way more effective than just running up to people with my hand in their face.

Because of the cold, there weren’t a lot of people out mid-morning on a Tuesday. I understood, but it was still disappointing, not to mention concerning. What if I couldn’t get 100 people before I had to go to work? Would I have to continue the high-fiving into the evening after work was over?
Of those that were out and about, many refused to take their hands out of their pockets because of the cold and intense wind whipping around. Or maybe they, like the naysayers I had told earlier, were afraid I was crazy, or had the swine flu. 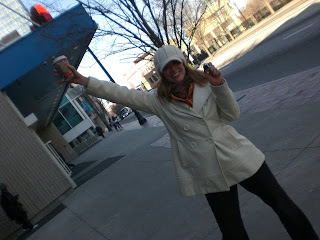 There were several homeless people who seemed caught off guard that I was approaching them before they had an opportunity to approach me. Eventually I stopped slapping the homeless high-fives only because every time I did they would ask if I had any spare change. I truly had no money in my pockets to give them. I felt badly that they helped me with my goal for the day, and I couldn’t help them with theirs.

Periodically Devon would throw out challenges and offer bonuses if I completed them. When some high school basketball players in warm-up suits passed us on the street, he said he'd give me some extra points if I got the entire team. I ran up to them, weaved in and out of the pods they were walking in and slapped each one of them a high-five. And then I found out the rest of the team was still inside eating lunch. D'oh!
I went to Underground Atlanta in an effort to high-five a lot of people at once. But when I took my hand out of pocket to try and high-five a man at a kiosk selling airbrushed license plates, he cowered in the corner like I had just taken a gun out of my coat. Even when I said, "It's just a high-five," he still refused to play.

The award for best executed high-five came at the hands of a gentleman walking towards me on the street. We were walking at about the same pace, he was on my left. As we drew closer to pass one another, I said, "Happy New Year, high-five!" He raised his hand, and I raised mine and without missing a beat or breaking our stride, we connected in he air. It was flawless.
Devon offered extra points if I went into an old school barber shop and got everyone inside. I hesitated on this one. There was something about going into a person's place of business that felt a little more forward then even I wanted to go. I was intimidated, but I went in anyway, slapping five with about ten gentlemen, including those who were giving and receiving haircuts. Each one of these men deserves an award for "most shocked" by the insane person giving high-fives.
Now, I knew going in that I could've knocked out 100 high-fives on two floors of my office building, so I set a rule ahead of time that high-fiving co-workers was not an option.
Midway through the challenge, Devon took my already established rule one step further and said I couldn't even slap high-fives inside the food court atrium at the ground level of our building. 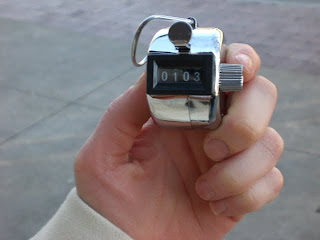 That was a dirty trick, because when we took a break to escape the cold inside, the place was crawling with people, most of whom I did not know.

Inside, Mo gave me a high-five (that didn't count) and hooked us up with hot chocolate. It energized me to finish the job.

We walked across the street where a Christian kids conference was going on. This was crucial for me, as time was starting to tick. Plus, I thought, if Christians won't give out high-fives, then I might as well just quit.

Hitting a large group of people at once was key, I learned. As long as one person in a group was willing to high-five me back, chances are others would to. A couple of youth groups walking back to their church vans and I quickly closed in on my goal.
I completed my 100th high-five on the corner of Marietta Street and Centennial Olympic Boulevard on a group of guys in town for a building convention. They were headed to lunch and likely assumed that I was out on lunch break from a group home. But I didn't care.

What's unfortunate about this task is that I don't actually have any pictures of myself high-fiving anyone. You can thank super diligent counter Devon for that. He was too busy making sure there was 100 percent accuracy on the counting, that he wouldn’t be bothered by taking pictures. I guess that's why I hired him for the job.

I have no idea when Day 200 or 300 will fall, but if you have any suggestions for what you think I should do those days, please let me know. And if a random person the street wants to give you a high-five, give her a high-five right back. Swine flu or not, she may be celebrating a blog milestone and in need your support.