Day 128 was one of the country's most anticipated days of the year: Groundhog Day. My friends in the northeast and DC had suffered numerous snow storms that seemed to have no end, but perhaps, we were all hoping, the groundhog had good news of an early spring.

I sincerely wanted to go to Punxsutawney, Pennsylvania where the real deal groundhog Punxsutawney Phil comes out of hiding to either give us six more weeks of winter, or an early spring. I googled flights to Pittsburgh and looked into renting a car that would take us to Punxsutawney. Convincing someone, anyone, to come along on such an adventure proved to be a challenge, however. Even the most enthusiastic blog supporters weren't interested in flying to Pittsburgh on a Tuesday. The Pennsylvania Groundhog celebration fascinates me and though I couldn't make it happen as a part of Project 29 to 30, it remains on my bucket list.

Lucky for me, Georgia has its own groundhog, who also makes a weather prediction every 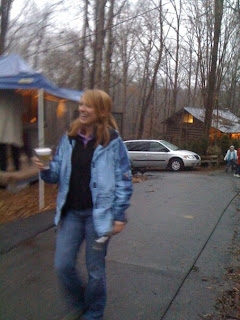 Day 128's thing I've never done before was to pay a visit to General Beauregard Lee at the Yellow River Game Ranch to hear what the little rodent had to say.

I sent the following email at 1:58pm on Monday (the day before Groundhog Day) to several friends at work:

Alright…I didn’t make it to Pennsylvania to see Punxsutawney Phil, but who wants to go see General Beauregard Lee tomorrow in Lilburn?!

By 2:09pm, Mo, (Hunting) John, and Justin were all on board. Other friends wanted to be on board, but couldn't because of various work and personal commitments.

John made the final plans and shared them with the group.

Meet at my house at 6:45AM.
Go to Game Ranch & be there by 7:15.
Depart game ranch and eat breakfast at Matthews Cafeteria in Tucker.
Report to work at regular times after that.
Cool? 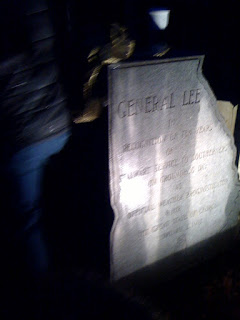 Cool? Yes, John, this is more than cool. I was overwhelmed at the response and thought to myself, "I'm a really lucky girl to have been able to convince not one, but three fabulous gentlemen to accompany me on this trip." Maybe 2010 isn't so bad, after all.
Tuesday morning was cold and rainy. It was still dark out when I checked my Blackberry and saw that John had emailed the crew:
Still on in the rain?

As if a little rain was going to keep me from watching a groundhog that predicts the weather? I knew General Lee was coming out rain or shine and I'll be damned if I'm not there to see it. Besides, Justin and Mo were already on their way. Still not sure what we were getting ourselves into, we arrived at John's, piled into his truck and headed out.
When we got to the Yellow River Game Ranch in Lilburn, Georgia, I was surprised that all the parking spaces were already taken. There are other people actually interested in this enough to be here in person? There was a television satellite truck, which I expected. Local news exists for events like this. Despite the crappy weather, I could feel the excitement in the air, and in a strange way, I was nervous. Nervous because I wasn't really sure where we were supposed to go and a little afraid that we were late and that we might miss it.
The moment I stepped out of the car, I could hear roosters crowing. They were loud. I assumed they were far away perhaps in a barn where most roosters live, but when Justin instructed me to look up, I saw that they were hanging out in a tree. Can roosters fly? How did they get up there? This place was bizarre.
In order to get to General Lee, we had to walk through the front door of a cabin full of cheap wildlife knick knacks and out the back door onto a wooden walkway that led to rest of the ranch. On the wooden walkway was a deer, with its antlers cut off, walking towards us like it was a dog. A big gross dog with knobs on its head.

I stopped suddenly at the site of this deer, completely freaked out.

Speaking of John, I looked at him, sure he was wishing he had a weapon to take care of this deer right then and there. His eyes lit up at the sight of the animal, but not in a, “I want to shoot you and eat you for dinner” kind of way. Instead, he went up to the deer and started petting it like they were old friends. Apparently when killing them is not an option, John is quite fond of domesticated deer.

Are we at a petting zoo, I wondered? Was I going to have an opportunity to pet General Beauregard Lee?

I ran behind Mo and Justin, wanting to put distance, and people, between the deer and me. I’m not sure why I was so freaked out. The whole thing felt unnatural, creepy. Deer are not pets and they should not act like it.

Just like a dude at a bar that can’t take a hint, this deer followed me around for the rest of the morning, even though I had made it very clear to the deer, and to everyone, that I didn’t like it. Every time I turned around, it was there, getting fed popcorn by little kids, or just rooting its little nose into circles of visitors.
What kind of a weird-ass place was this? What goes on here? I honestly don’t know. I spent the morning there and I still don't know. 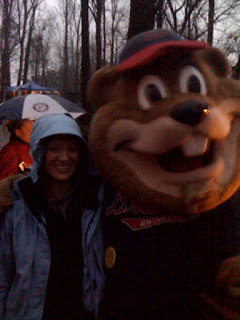 We arrived at General Lee’s house, which was a dollhouse sized antebellum home surrounded by a metal fence. How very southern of Beauregard.
There was a local news reporter treating this event as if as if she were breaking the biggest scoop in Atlanta that day. She was wearing a rain coat with fur on the hood and multi-colored boots, which were both over the top. But what annoyed me the most about her was her decision to stand directly in front of the house, obstructing my view and the views of several small children standing behind her. With a lot of self-importance, she pulled out her Blackberry and starting messaging someone furiously. I wanted to tap her on the shoulder and ask her if she understood where she was, and to find out if she was typing eye-witness accounts of the groundhog’s movements.
I managed to lose the deer for a while, only to gain another pest, this one of the mascot variety. I think it was the mascot for the Atlanta Braves minor league baseball team. This "hilarious" bear would stand right beside me, hug me, dance around and put his hand in front of every picture I tried to take. My temperamental camera was not prepared to deal with this clown/bear/annoyance and like the deer, I did my best to dodge it for the rest of the morning.
The crowd was small, but spirited, as an older gentleman with a microphone welcomed everyone 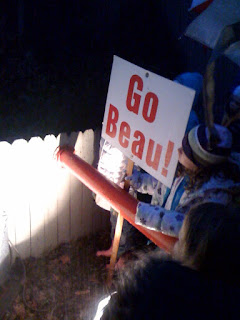 to the ranch and gave a little background on the history of General Beauregard Lee. Then he started a chant in an effort to coax General Lee out of his mansion. The crowd happily obliged.

One side yelled “Go!” and then the other side yelled, “Beau!”
"GO BEAU! GO BEAU!"
I felt like I was at a pep rally. For a groundhog. The cheering made me laugh. In fact, I’m quite certain I’ve never laughed this much before 10am in my life. I found the whole experience, the chanting, the roosters, the people, hysterical.
General Lee still refused to come out of his house when some poor dude was chosen to open the fence, walk inside, and place a bowl of food in front of General Lee’s door. It wasn’t long before the front door opened, and out walked Beauregard. He stayed on the porch for a little bit while the crowd snapped photos wildly. According to the commentator, General Lee did not see his shadow and spring is on the way! I’m not sure how he was able to make such an assessment because I’m quite certain that all General Lee was able to see was camera flashes and the cheesy grins on the faces of the people in the front row. He ran from the house and into the bushes next to the fence.
And that was it.


Groundhog Day was a few weeks ago, and I can say with confidence that General Lee was wrong. Really wrong. Spring has not come early to Atlanta, or to any other city that I know of.

I was determined to get a group picture before we left, so I turned around and found a young guy with long brown hair slouching behind me. 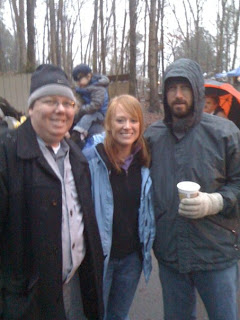 “Would you mind taking our picture,” I asked him, as I handed him my camera, assuming he would say yes.
The guy took the camera from me by he took a step back like he was completely weirded out and scared. I considered that he may just be weirded out by the Yellow Game River Ranch, because I was too, but I soon realized this guy may have been a little “off.”
We all smiled for the picture, but my less than reliable camera completely crapped out and went to black.
Long haired dude, who I’m convinced is either the Unabomber or a child molester got even weirder as he handed me back my camera, and stammered, “Uh…uh…I’m really bad with technology.”
I grabbed Mo’s iPhone to get Unabomber/Child Molester to try again, but before I could hand it to him, he turned around and bolted out of there, presumably to get back into his white van with tinted windows. So bizarre. We couldn't get anyone to take a picture of the four of us, so Justin offered to take one of Mo, John and me. 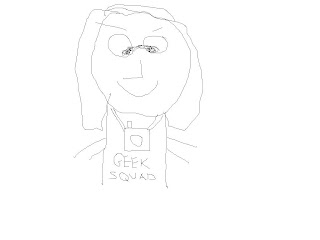 We left the Yellow Game River Ranch by way of the gift store/cabin where we entered. There were a plethora groundhog stuffed animals and other outdoorsy souvenirs that would’ve gone great in John’s hunting cabin, but we left without purchasing any.
Instead, we went to Matthews Cafeteria in Tucker, an old-fashioned cafeteria that felt like a step back in time. We loaded up on unhealthy breakfast food and called it a day.
Only it wasn’t even close to being the end of the day. It wasn’t even 9am and we all still had to go to work after watching a groundhog incorrectly predict the weather, running from a domesticated deer and "interacting" with a founding member of the Geek Squad.
Happy Groundhog Day to me.
Posted by Stephanie Gallman at 4:41 PM

Email ThisBlogThis!Share to TwitterShare to FacebookShare to Pinterest
Labels: John B., Justin, Mo