For a few months, there was a large billboard on Interstate 75/85 Northbound in Atlanta that read, "Google this Puppy Mills."

The billboard confused me and several others and sparked a conversation at work. 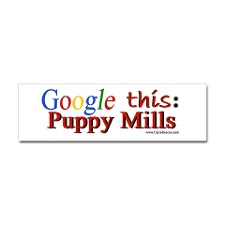 Mo said he refused to follow the billboard's instructions, on principle alone.

On Day 119, I followed the advice of a billboard and I Googled puppy mills as the thing I've never done before.

Part of me expected a puppy to drop into my lap from the sky after googling these words. But no such luck.

Instead, the search brought up lists full of websites dedicated to explaining how awful puppy mills are. I'm not sure I needed all of these different sites to tell me this. I thought they were bad all along. I don't think I needed to read literature on the Internet to fully understand it.

The billboard clearly worked, though, which made me think, what would I put on my own billboard if I had one? I'm ashamed to say it wouldn't be something as high-minded as bringing awareness the cruelty of puppy mills.

Mine would probably say, "Google Project 29 to 30." What would yours say?
Posted by Stephanie Gallman at 10:17 PM

Email ThisBlogThis!Share to TwitterShare to FacebookShare to Pinterest
Labels: Mo