I have a love/hate relationship with cover bands.

Don’t they, after all, represent what’s wrong with music today? No originality? No creativity? The music snob in me wants to yell at these cover artists, "Be different!" or “Do your own thing!” I should hate cover bands and their willingness to use any musical talent they may possess in playing someone else's songs.

Except I don't hate them. I secretly, or not so secretly, love them.

I mean, some cover bands are terrible and completely ridiculous. But I've danced the night away at enough weddings and seen enough Yacht Rock and Dark Star Orchestra to know that cover bands aren't always a bad thing. Sometimes they can be really awesome. 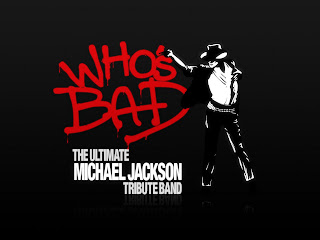 Day 117 feeling better and much more rested, I decided to go see a Michael Jackson cover band, Who's Bad.

I know what you're thinking, and I can’t say I disagree. Who has the audacity to cover Michael Jackson? Michael Jackson is, was, and always will be, an original. There is no way anyone could sing like him, dance like him, or perform the way he did.

But I assumed, that in reaction to Michael Jackson's sudden death over the summer, this band came together in an effort to try and do just that. I was surprised to learn that Who's Bad has actually been touring for six years all over the world.

When the band took the stage, I was expecting a huge production of lights, video possibly pyrotechnics. I mean, if you’re going to cover Michael Jackson, don’t half-ass it. Unfortunately, though, the set was rather lame. Just a black curtain.

Once the performers were doing their thing, I forgot all about that. They were very lively and entertaining. The horn players doubled as back up dancers to the young, energetic Michael Jackson impersonator, who I was having a difficult time getting used to, despite the fact that he was a pretty good dancer and singer.

I was just adjusting to the Michael Jackson impersonator when he left the stage for what I thought was a costume change. While he was gone, another impersonator, this one older, came out and started singing another song. He could sing, but as my friend John said, “He’d lost more than a few steps on the dance floor and I’m pretty sure he was using the mic stand as a crutch.” 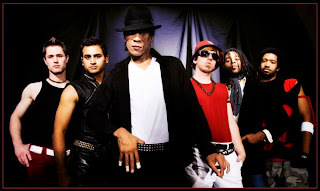 Perhaps the greatest thing about this band had nothing to do with them at all, but the songs that they are covering and the crowd they were playing too. They mixed it up with new and old songs that everyone was singing and dancing too. I realized that there is just something about Michael's music that excites me, regardless of who's singing it.

During a break in the music, Day 117 turned out to also be the first time I've ever been hit on using a magic trick. I've heard a lot of pick up lines over the years, but this was a new, fresh approach. I'll admit I was skeptical when this guy pulled a deck of cards out of his pants pocket, and the whole routine was borderline cheesy, but the trick was cool. I thought the guy was too, until he insisted that my friend John was my boyfriend and regardless of how many times I told him he was not, Magician boy would not believe me.

I did appreciate that the Michael Jackson impersonators (both of them), were both well aware they are not Michael Jackson, they just sing his music. I've seen other cover bands and wanted to nudge the lead singer and say, “You do know that you’re not Dave Matthews, right? Dave Matthews and his band are still alive!" These guys thanked Michael, and commented about how much they missed him.

I also appreciated the parents who came out on a Friday night and brought their young kids, dressed up as Michael Jackson during various stages of his career. One of the kids even got on stage to show everyone his moves.

I’m always interested in the moment that musicians and performers decide to spend their career imitating someone else's sound instead of creating their own. But, I'm not sure that it even matters. In the case of Who's Bad, these performers have set out to keep the music of Michael Jackson alive and well. And they're not bad at all. They're actually pretty good at it.
Posted by Stephanie Gallman at 10:19 AM