On Day 130 I flew to Mansfield, Ohio for work. I know, not exactly the most exciting assignment I could've been given, but Mansfield was a place that I had never been before, so the blog possibilities were boundless. 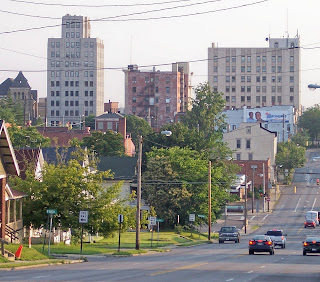 Day 130's thing I've never done before was to cruise Mansfield, in the snow, in a rented PT Cruiser (this picture is obviously not from this visit).
I have a lot of family who live in cities all over Ohio, and sadly this is the only time I've been to Ohio and didn't make contact with any of them. Not because I wanted it that way, but because my hectic schedule didn't really allow for any free time.
Mansfield is located right in the center of Columbus and Cleveland, Ohio. In fact, I flew into Columbus and flew out of Cleveland the next day because of inclement weather.
Among the things I did that I'd never done before while in Mansfield included: visit a General Motors Plant, go to a City Council Meeting, attend a business meeting at an Applebee's.
Some fun facts about Mansfield:

Those are all of the fun facts that I know right now, but I'll work on getting more. I'm going to be spending a lot of time in this city over the next year, so if you have any ideas for fun stuff to do in airports (or Mansfield), send them my way.

Posted by Stephanie Gallman at 11:36 PM