Sometimes friends approach me, anxious to help me pull off an adventure for the blog.

Other times, like Day 105, I track friends down at the mall and demand that they come to dinner with me to eat food we've never tried. 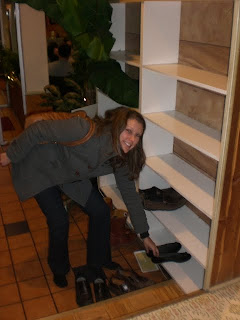 My friends Lauren and Donald were the victims of this ploy and I actually did run into them at the mall on Sunday afternoon. I revealed to them that my blog plan for the day had fallen through and I was in need of an idea. Korean barbecue was an idea we'd talked about before that we all wanted to try. I cornered them, and they agreed to make this the day.

After taking care of our errands at the mall, we met back at Bloomingdales to discuss where we would carry out this plan. We used Lauren's iPhone to scope the Atlanta Korean barbecue scene. Which of these is not like the other: Bloomingdales, iPhone, Korean barbecue?

Surprising to me, there were many of these restaurants to choose from. Donald asked his sister for advice and she said Hae Woo Dae had the best Korean barbecue in Atlanta. We'd have to cook the meat ourselves, however, and she added, the restaurant is pretty gross.

I did not feel good about that. I love dives, but if a restaurant is dirty or unkempt, I tend to lose my appetite. We kept looking.

Half the fun of this challenge was the names of these places.

Awesome, right? We considered choosing based solely on the name of the place. I mean, let's be honest, Seoul Garden isn't as fun to write about as So Dong Kong. But that idea backfired because some of the ones with the best names had bad reviews, and some didn't serve alcohol. It was Sunday, and we weren't looking to tie one on, but we all agreed that if the food was a complete disaster, it'sd be nice to have a drink to wash it down with.

Hae Woo Dae kept coming up on each list we looked at, touting the most authentic Korean barbecue. And most of the comments about the place were positive. So eventually we decided to go there, crossing our fingers that it wouldn't be too gross and we'd be able to stomach the environment and the food.

To get to Hae Woo Dae, we drove up Buford Highway, which is like the restaurant United Nations in Atlanta. I could give up on doing anything else for the blog and simply eat at a new restaurant on this street everyday for the rest of the year and still not try them all.

Hae Woo Dae is in a strip mall right behind Shooter Alley, a Gentleman's Club. I wondered if going to a strip club was standard practice following eating Korean barbecue. 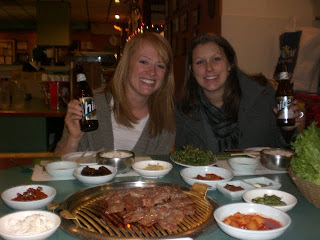 When we walked in, I was surprised to see that there were quite a few people at the restaurant. Everyone looked like they were normal and like they were enjoying themselves, and the food. I felt relieved. The place was so busy, there weren't even any tables to sit at, so we opted to get the full experience by taking off our shoes and sitting on floor.

The table where we sat was very low to the ground underneath an enormous vent. All the tables in the place had charcoal grills in the center of them. In the corner of the room was a stack of thin mats covered in loud 1970's fabric. The mats reminded me of a kindergartner's nap time mat, only square.

Sitting on the floor was a much easier thing for Lauren and me to do than it was for Donald. He laughed at himself, proclaiming that the reason he was having difficulty is because he's fat. But he's not fat! Not even close. He's just a grown man. Interesting, and something I'd never considered before, but I don't think I'd ever seen an adult male sit "Indian-style." At what age does it become difficult for them to sit this way?

The first thing I noticed on the menu was that Korean barbecue isn't cheap. Each entrée was in the $20-range. I felt badly for suckering the Stewarts into coming with me. Forcing them to subject themselves to blog fodder and pay big bucks for the food, when we weren't even sure we were going to like it. 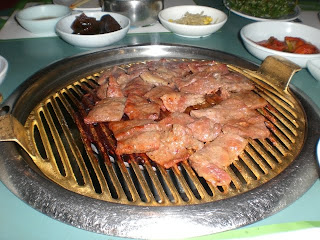 Ever the good sports, they reassured me that they were excited about it. This was certainly going to be an adventure.

We ordered three Hites, a Korean beer that had a label that looked more like a toothpaste label than one for beer. When she came back with our drinks, we asked for some guidance on the menu. When we were figuring out where we were going to eat, we read several reviews that advised two entree portions would be plenty for three people. With the prices of the entrees, we decided to take that advice.

But when we asked the waitress, she shook her head, “No,” and held up three fingers and then pointed to each of us, as if she was counting. She disagreed with our math, or more likely, she was going for the up sale. Even though I didn’t understand a word she was saying, I was on to her.

Donald nodded his head, "Yes," that we understood that two orders were not enough for three people. Three orders were necessary. And then the waitress left, presumably to give us time to decide what we wanted.

When she returned with our spring rolls, we were a little annoyed that she didn’t ask us what we wanted to eat. But we enjoyed our appetizer as we still considered what items we were going order. The menu was confusing. Everything was in English, but we couldn't tell the difference between marinated beef tips or boneless ribs. We still thought we’d get away with two entrees, one chicken and one beef, we just weren't sure which ones. 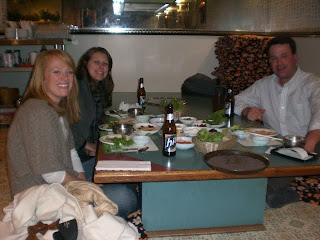 The waitress then returned and started placing small dishes on our table each full of various condiments. Some of which we recognized, others we didn’t. She also put a plate full of raw beef tips on the table next to us. We all looked at each other, confused, but were pretty sure it wasn't for us, since we hadn't ordered yet.

Ahh, language barriers. We went around in circles with the waitress trying to explain that we didn't want three orders of beef, we were just saying, "yes, we understand what you're saying." But it was a lost cause, and we eventually just accepted that this is what we were going to eat.

The grill set up on the table was hot and the waitress put a third of the marinated beef on it to begin cooking. The delicious smell wofted through the restaurant.

Maybe this little misunderstanding worked out in our favor, because the food was delicious. Included with the condiments was a head of bib lettuce to make wraps with the beef after it was cooked. The condiments were a variety of different flavors, sweet, savory and spicy, to pair with the beef.

We polished off all three orders with n problem. Maybe that waitress knew what she was talking about. Or maybe we're all overeaters?

She apparently felt badly about messing up our order, though, so she brought us three more beers. We thanked her, but declined her offer. We were full and sleepy and it was time to wrap up this meal.

The price tag was a little hefty, but the experience was awesome. And the food and company were too.

I'll be back. And Donald, next time, we can sit at a table.

Posted by Stephanie Gallman at 4:56 PM