Everyday on my way into work, I pass Atlanta's Oakland Cemetery, a massive burial ground that has been a part of the city's landscape since 1850. 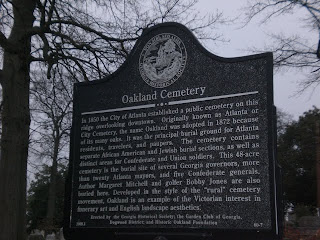 Since I've lived in Atlanta, whenever I have passengers in my car and I pass the cemetery, I say almost the same thing, every time, "That's Oakland Cemetery. Margaret Mitchell, who wrote Gone with the Wind, is buried there. So are several Civil War soldiers."

I don't know who told me these fun facts about the cemetery, or why I feel the need to point them out every single time I drive by. Perhaps I do so to draw guests' attention to the cemetery and away from the crazies that tend to congregate on Memorial Drive. Regardless, I've said that statement to so many times, I believe that what I'm saying is true, even though until Day 118, I'd never actually been there.

I've been pretty open about 2010 not being the best year for me so far. I'm not sure why, under the circumstances, I thought hanging out in a cemetery, alone, on a cold and rainy Saturday afternoon was a wise move. Perhaps I'm a masochist? 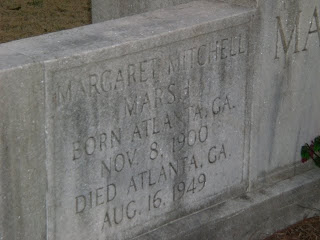 Does anyone have any ins with the circus? Or the parade people at Disney World? These are activities I should be participating in. Enough of all this depressing shit.
I digress.

Oakland Cemetery was cool, though, and I was right! Margaret Mitchell was buried there.
There are a lot of people buried there, in fact. This cemetery is huge. I took my time walking up and down the rows of headstones, actually using this experience as my work out opportunity for the day. I'm still not sure I was able to see all of it.
Oakland Cemetery's website says that many of daily distinctions in life were maintained in death. White people were buried separately from African-Americans and Jewish people separately from Christians. 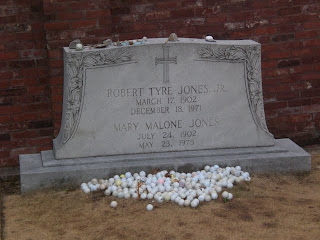 Besides Margaret Mitchell, there are other notable figures buried at Oakland Cemetery, including golf great Robert (Bobby) Jones, whose grave site is covered with golf balls left by visitors. Maynard Jackson, Atlanta's first African-American mayor, was buried there, as have several of Georgia governors.
I'm not sure if it was because I just saw Who's Bad the night before or what, but I had to fight a significant and real urge to bust out the Thriller dance while walking through. I reigned in my desire, though and showed respect for the dead.

There were rows upon rows of Civil War veterans' headstones. I learned later that during the Civil War, the city, with the help of the Confederate government, bought more land expanding the cemetery's six acres to 48. 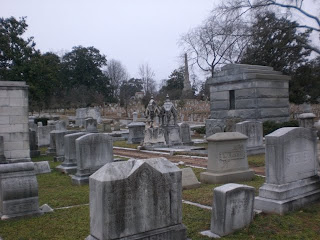 There is so much history in this cemetery, so many interesting stories I later read on Oakland's website. If you live in Atlanta and haven't been, go! And if you ever visit the city, put this on your list of things to see. I'm told that they give a Haunted Tour during Halloween. I had planned on doing that for the blog, but it was sold out, hence the horrible Haunted House on Day 31.

No, hanging out in a burial ground certainly isn't the most uplifting activity I could've chosen for this day, but I'm glad I have finally seen the Oakland cemetery that I've been talking so much about.

If I decide that Day 199's thing I've never done before should be "play in rush-hour traffic," please someone intervene.
Posted by Stephanie Gallman at 10:14 PM