Day 124's thing I've never done before was to drink a Guinness. A full Guinness. I've had sips of Guinness, sips of Black and Tans before, but this time I was drinking it for real. No more sissy sips.

I didn't exactly tell my friend Andrew that I needed his help in completing this task when we made plans to hang out. I met him over at his friend Beau's house and I assumed I'd be able to talk them into joining me for Day 124's blog adventure. I didn't have to go to an Irish bar to pull this off, after all, I just needed to get to a bar with Guinness on tap. 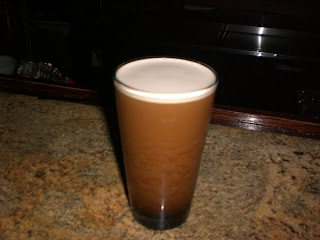 After we sat at Beau's for a couple hours, Andrew tried to talk me out of going out for a Guinness and into taking a shot of high-end tequila as the thing I've never done before, but I think that was so we didn't have to go out in the cold.

There are times, and this is a prime example, when the blog becomes a drag and I just don't feel like doing anything I've never done before. I had to push through.

Luckily Beau was a little stir crazy too and we headed The Elbow Room, bellied up to the bar so I could order my Guinness.

Right when the bartender poured it, I wished I was drinking liquor drinks like Beau and Andrew. Despite skipping dinner, the beer looked like a meal in a glass. And it was.

The liquid meal tasted good, but I honestly don't know how people drink more than one. I didn't even eat dinner that night and I was full after just one.

Andrew tried to up the ante by ordering the bear fight I almost did back on Day 13. A bear fight is a jager bomb followed by an Irish car bomb. I told him I refused to do it, after my friend Vic said it was the worst decision he had ever made.

When the bartender brought the drinks, Beau helped me out and drank the jager bomb (red bull and jager). I stuck with the Guinness and drank the Irish car bomb (a shot of Bailey's dropped into a Guinness). Not bad.

It was a Lovely Day for a Guinness (or two), indeed.
Posted by Stephanie Gallman at 10:48 PM

Email ThisBlogThis!Share to TwitterShare to FacebookShare to Pinterest
Labels: Andrew