Day 107: Makeovers Do Not Suck

My mom hates the word "sucks," but sometimes there is no other way to describe something.

Nothing hugely catastrophic was making this year so sucky, but it's more a whole lot of little things.

What's that phrase, "When life gets you down, go get a makeover?"

I don't think there is such a phrase, but when my friend Shelley said she wanted to get makeovers at Woo Cosmetics in Peachtree Battle, I loved the idea. I thought maybe it was just the pick-me-up I needed.

Day 107's thing was to get someone else to do my makeup for work. 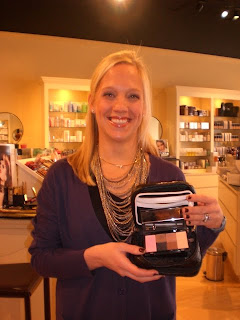 Ahead of going, I had to check my bank account. I've seen department store cosmetic consultants sucker customers into getting "makeovers" that consisted of a 45-minute makeup pile on, followed by a forceful sale of products they'll never use.

I was prepared to purchase some makeup, but I really hoped I wouldn't get pressure to buy a bunch of products I don't need or use. I had no energy to argue with a pushy salesperson.

Shelley wanted to go to Woo because she got a gift certificate for Christmas. During our makeovers and after, I noticed Shelley and her makeup artist referring to her "planner" that she just got. They went on to discuss how they wanted to fill the planner, or move things around in the planner. Clearly they weren't talking about a date book. So finally I had to ask, "What are you guys talking about? What's a planner?"

Shelley spoke first, "Like a Trish McEvoy planner?" she said as she held up what looked like a black makeup case. This was no ordinary makeup, however.

If Cover Girl and Maybelline are plain 3-ring black binders, then the Trish McEvoy "planner" is like the Trapper Keeper. On the outside it looks like a leather makeup bag, but when it's unzipped, the planner is clearly so much more.

There really is a 3-ring binder where you can clip makeup cases inside and literally flip through them. Shelley got her planner for Christmas and had come to Woo to fill it up.

I assumed that since this is the first I'm hearing about them then they must be new on the makeup scene. However, these planners have been around for a while. No surprise, this is the first I've ever heard of them. I had just gotten on board with Laura Mercier and now they're throwing me the Trish McEvoy planner. I can't keep up.

Part of me hoped that they would do my makeup in some dramatically different way so I could write about the reaction of my colleagues to me with bright red lipstick or dark smoky eyes. I think I would've tried to play it off like everything was completely normal.

My makeup artist (and they are artists, not just salespeople) kept it very fresh and neutral, though and I found the whole experience to be completely relaxing. At the end of the makeover, she held a mirror up to her work and I was impressed. I was on guard waiting for her to start throwing products in my direction to buy, but she didn't. 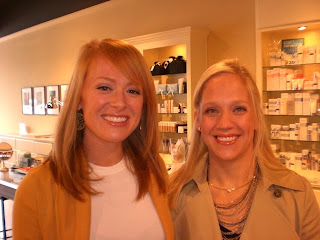 She didn't have to. I now own a Yves Saint Laurent Touche Eclat Concealer meant to brighten up an otherwise "ashen" face. I'm not sure that my skin has ever appeared 'ashen" even on my worst day, but I'm all set if that changes, thanks to this magic concealer. I also bought a Laura Mercier Eye Basics wand that supposedly creates the perfect canvas for eyes by camouflaging imperfections. I'm all about hiding things, so both of these purchases were good for me.

While performing the makeover, filled out a sheet with all of the products that she used so if I wanted to come back and purchase something, I would know what I was asking for instead of wandering around the store picking things up and saying, "Midnight Navy...Smoky Rose...I think these are right?"

I didn't expect the Woo staff to makeover my life, but a good makeover never hurt.

Maybe it's shallow, but I did feel better about myself.

And apparently I looked better too, because one of the first co-workers that I saw, Jackie, who at that time also thought 2010 was sucking too, said, "You look so pretty today!"

I'm not sure if he actually noticed anything was different or if he just felt badly because he was standing there, but our friend John looked at my closely and said, "Yeah, something's different. It looks good."

Getting someone else to do your makeup and people telling you that you're pretty: two things that do not suck in 2010.
Posted by Stephanie Gallman at 12:08 PM