Yesterday was my 32nd birthday.

When I began blogging three years ago, I was so scared to turn 30, I wanted to do new things everyday in a desperate attempt to hold on to every last day of my twenties. 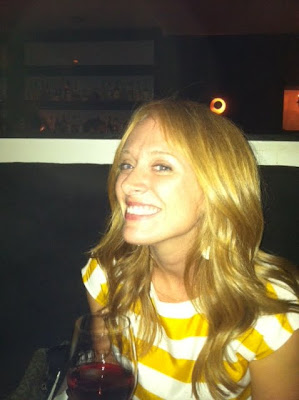 Now that my 30th and 31st years have quickly come and gone, I would've thought that each birthday would send me into complete freakout mode.

I don't know if it's maturity (most likely not, this is me we're talking about), accepting the inevitable (getting older sucks, but it happens, so deal with it), or just inner peace that comes from considering the alternative (if I wasn't getting older, I'd be dead), but I've never felt more at ease about celebrating another birthday.

I woke up to text messages and voice mail messages and Facebook posts that made me feel loved and cared for - the way everyone should and hopefully does feel on their big day.

For the most part, though, yesterday was just another day.

There were cards and gifts; a lunch date and a dinner date. There was even wine on a school night. Yahoo!

But there was also a morning yoga class, a long overdue trip to the nail salon, and a normal Thursday at the office.

Just another day - happy, healthy and 32.

Happy birthday to me. Happy Birthday to my little project. Happy Weekend to all of you.

Thank you for the birthday wishes.
Posted by Stephanie Gallman at 12:21 PM 8 comments:

peace on the pch.

After reluctantly tearing myself away from my sequined bathroom at the Madonna Inn, I headed north on the Pacific Coast Highway to Carmel where I would meet up with friends to begin Elizabeth's wedding festivities.

I had absolutely no agenda except take lots of pictures of beautiful scenery, a task I'd looked forward to since planning the trip.  Only leave it to me to choose a foggy, cloudy travel day where the visibility was almost zero.

The bright side, I suppose, was that any worry I had about getting car sick driving along steep cliffs and on winding roads was quickly alleviated by the fact that I couldn't see the danger that was all around me.  I could hardly see anything five feet in front of my face. Without the beautiful landscapes and the Ansel Adams photo shoot I had planned, there was plenty of time to reflect.  Admittedly (and embarrassingly), I thought briefly about how much I'd wished I had someone to share all that I was seeing (or not seeing) with.  But mostly I thought about how immensely blessed I was (and am) to have arrived at such a peaceful place in my life; grateful for a two week vacation in a beautiful place and eager to celebrate the much anticipated wedding of a dear friend with so many of our other dear friends.

Even without much to see, there are still endless opportunities to be happy on the PCH.

When I wasn't reflecting, I was concentrating - mainly on keeping the tunes pumping through my iPod and at keeping my hands at 10 and 2 on the steering wheel so as not to crash the rental car off a cliff.

Just when I'd given up on getting to see any of the picturesque scenery I'd spent weeks researching and had been so excited about, the clouds and dense fog began to lift and the sun came out. I quickly pulled over to take pictures, smiling like an idiot at this unexpected shift in the weather.

I certainly didn't need this weather metaphor to remind me about just how quickly and how vastly life can change for the better (and sometimes for the worse) in just minutes.  But what a sign mother nature was giving me -- there are going to be days when the sky is gray, when visibility isn't clear, and it seems like the fog won't ever lift.

Yet somehow it always does  So grab an umbrella, turn up the music, and keep on trucking north.

Looking at people's vacation pictures - especially a solo vacation where all the pictures are of scenery or of an out of focus person (ahem, me) holding the camera for a self-portrait - is not really high on my list of fun things to do.

So I set mine to the sweet sounds of Michael Kiwanuka and made a little movie to make them easier to digest.
PCH from Stephanie Gallman on Vimeo.

Carmel on Dwellable
Posted by Stephanie Gallman at 3:30 PM 3 comments:

Perhaps one of the reasons I was happy on my own and content to head back to my hotel in San Luis Obispo, is because my hotel was the famous Madonna Inn. When I walked into the lobby area to check in, I knew I'd seen the place before - on "The Girls Next Door" - when Holly, Kendra and Bridget stayed there on a girls' weekend.

Obviously, this hotel was right up my (Bubblegum) alley.  Get it? Can you think of anything more fabulous?

Here's wishing you a happy weekend - full of sequins and brightly colored things.
Posted by Stephanie Gallman at 1:44 PM 5 comments:

When I decided to combine a visit with Kelly in Southern California with Elizabeth's wedding weekend in Northern California into a one very big vacation, I thought for sure that by the time August rolled around, I'd have met someone (a fella, perhaps?) who would want to accompany me on a drive up the scenic (and romantic) Pacific Coast Highway.

If not a guy, maybe a friend would want to join me for a west coast adventure?  It could be just like Thelma & Louise, minus the whole murder thing.

At the very least, maybe someone also heading to Elizabeth's wedding might need a lift from Los Angeles to San Francisco and I could give them a ride?

I had a lot of prospects ranging from the bags-are-packed-but-I-have-no-vacation-time to the mildly-interested-that-sounds-cool-but-probably-not, but none who could actually commit.

I decided to embrace the hand I was dealt and execute my plan anyway.  So I rented a car and took off on a solo excursion.

Though not in exactly the way I'd pictured, I said hello to my celebrity friends as I drove through Malibu and took a stroll through Santa Barbara and a Mexican culture festival before stopping for the evening in San Luis Obispo. Because of its pleasant climate, walkable streets and friendly people, San Luis Obispo has been called the happiest city in America.  Perhaps I was still basking in the glow of my new little friends or maybe it was the fact that the economy car I bid on through Priceline turned into brand new Nissan Altima at the rental car counter, but I was feeling quite happy.

In fact, I was happy before I even left Kelly's house, as she and I shared a lot of laughs over my failed attempts to pronounce "San Luis Obispo."

Eventually I started calling it "SLO" like all of the locals do, but with a slight southern accent, I sounded like a complete loser.

While I cannot comment on everyone's happiness level, I can tell you San Luis Obispo is a cool town full of eclectic stores and super hip (but nice) people.  The town reminded me a lot of my college town - Athens, Georgia (and we all know how I feel about that.)

One of the city's must-sees, according to the Lonely Planet travel book I read like it was the Bible, is "Bubblegum Alley," an alleyway covered with decades of chewing gum.

I'm not a germaphobe (at all) but when I stepped into the alley I felt like all the mouths that had once chewed this gum were now breathing on me.  I kept getting whiffs of Watermelon mixed with Spearmint, Grape mixed with Winterfresh and it made my stomach turn.  For the first time all day, I did not feel happy, so I stayed long enough to take pictures, and then moved on. All day I noticed that whenever I heard a good song, saw a beautiful landscape, or encountered a funny person, I wished that I'd been able to convince someone to come along for the ride.  I'd have to stop myself from reaching for my phone to text or email someone, even if just to say, "I almost threw up in Bubblegum Alley!"  I know there is joy to be had on my own - and I've been lucky to have experienced it - but I also know me; and I like company.

I cannot deny, though, that there is something satisfying about being on my own in a strange city - free to explore (or not explore) at my own pace, on my own timeline.  I've been known to make travel companions crazy with my inability to keep up with the group and my tendency to "wander" slowly with my head tilted back so I can take in all of the sights and all of the sounds.

By myself, I had no one to answer to.

So, I went to Big Sky and drank Anchor Steams, ate fish tacos, and talked to the bartender.  And then went to my hotel and watched the Olympics. Not exactly the raucous or adventurous night I would've spent in the happiest city in America had I been with companions, but it was SLO according to me and that made me very happy.
Posted by Stephanie Gallman at 2:06 PM 1 comment: