So much of this blog is just going to be about going to places I've never been before, both out of town and where I live. I haven't lived in South Carolina for five years, but I decided to become a tourist in my hometown and go to a place that I've heard people refer to since I was young: the Horseshoe at USC. 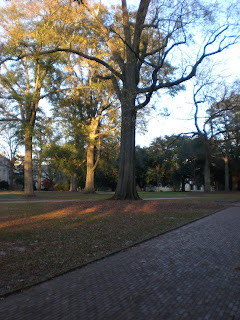 My mom agreed to accompany me on this trip, and since she is much more familiar with downtown Columbia, I assumed she would be able to show me where the Horseshoe is. She did not, however, so I eventually just parked the car and we got out and started wandering.

After several minutes, we ran into a gated area that looked very college campusy to me.

Before long, it became terribly obvious to even us that yes, this grassy area with a walkway in the shape of a horseshoe was, indeed, the USC Horseshoe that we were looking for.

The area reminded me a lot of North Campus at the University of Georgia where I went. Students were still on Christmas vacation, so there weren't a lot of people walking around.

While at Georgia, I got a job giving tours to visitors and prospective students. I loved that job for many reasons, but I truly loved watching guests marvel at the campus' beauty and history that I was showing them. As I walked through the Horseshoe, on the campus of a school that I didn't go to, I was starting to think that all of those people who acted like they were interested may have just been being nice. One old building started looking like all of the others. 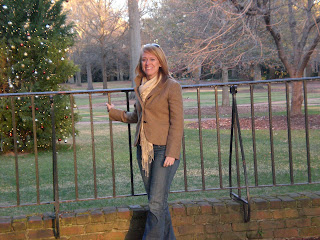 Maybe I should've taken a formal tour instead of my own self-guided version.

The Horseshoe, while nice, doesn't really have the significance to me that I'm sure it does to others who actually went to school there. The same way that North Campus at UGA probably doesn't mean anything to people that weren't Bulldogs.

When it was time to choose a college, I didn't really give the University of South Carolina a whole lot of consideration. I was hell-bent on getting away from my hometown. And I loved Georgia. Still, while standing on the Horseshoe, I considered for a moment that I could've gone to USC and been very happy there.

Don't get me wrong, I made the right decision in going to Georgia. But I'm so glad that instead of nodding absentmindedly when someone talks about the Horseshoe, I now know what they're talking about.

Posted by Stephanie Gallman at 1:09 PM