Day 59: Driving Range, for One


After staying on PGA West Golf Course in Palm Springs for the Phish festival, I made a promise to myself that I would work on my golf game. Evident by the three tries and misses it took me to sink one very easy putt, I had clearly been letting too much time lapse between visits to the driving range and lessons from my golf instructor.

As promised, to myself and to my dad, Day 59's thing I've never done before was to go to the driving range by myself.

I've been to the driving range dozens of times with friends and family, but going alone was something that was new to me, and therefore intimidating. I hoped that I would remember what size bucket of balls to get, where to go to pick them up, and how to set up my clubs against the stand. I also wanted to pull it off with enough finesse so as not to scream, "THIS IS MY FIRST TIME!" 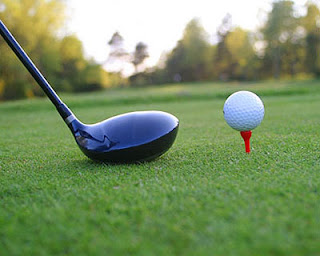 There was an obvious advantage of going alone, however, and that was that I wouldn't have anyone judging my every swing and critiquing my technique. The last time I played golf with my dad and brother, the two of them took turns correcting my mistakes. And there were many mistakes. I was already trying to recall everything my golf teacher had ever said to me, so every time I went to swing the club, I'd have a ten minute freak out trying to rememeber what all three of them had ever said to me. I was so nervous, and my game was a disaster. So I was kind of excited for it to just be me, free of all the advice and the judgment of all the men in my life that know how to play golf. I could hit the ball, or not hit it, anyway I pleased.

There was also another reason going solo had the possibility for fun. Single girl? At a golf course? Come on, don't tell me you didn't think of it.

Even my dad considered the possibility.

I texted him, sure that he would be most proud that I went, especially by myself. "I'm at the driving range," the text read. "Solo."

"Good for you," he texted back. "Any cute guys there to help you with your swing?"

So maybe in addition to working on my golf game, I was also considering the possibility that maybe I would meet some new friends. Don't judge me.

That possibility would obviously require there actually being other people there.

One person showed up as I was taking my last swing, but for most of the time I was there, it was just me.

This is so typical of my luck on both fronts. I did not meet any new friends and I probably shot better and more consistently than I've ever played in my life and there wasn't a soul there to see it. I used my pitching wedge for the most part, since that's what I've been learning on with my golf teacher. But I also hit some bombs with my driver, making it sing. I sent balls flying, one right after another, straight up the driving range's fairway. I remembered, once again, why I enjoy this game so much.

I have no idea what my technique looked like, if my feet were lined up correctly, or if turned my shoulders the right amount. But whatever I was doing was working for me. I swear. It really was.

I may add another thing to the list of things I'm thankful for: #101 A good day at the driving range.
Posted by Stephanie Gallman at 1:11 PM