If there is one thing that I've learned over the years, it's that after participating in a late night of drinking, planned or unplanned, there are several things that one should not participate in. 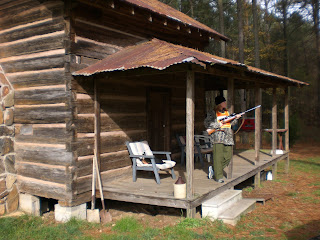 1. Call someone. Call anyone.
2. Operate a firearm.

I managed to stay off the phone after the impromptu wine tasting (thank God), but I already had big plans for the next day that couldn’t be changed. Wine haze or not, Day 81's thing I've never done before was to go deer hunting and shoot a pistol.

This adventure was put together by my friend John, who is an avid hunter. When I first learned of his hunting pastime, I was surprised. That's a lie. I was shocked. John, lover of the Grateful Dead, the Black Crowes, who spent eight years as a Park Ranger in Jackson Hole and looks more like a Colorado hippie than a Southern outdoorsman, hunts? A walking contradiction, that John. Much like myself.

Before we went I sent John an email asking him what I needed to wear and what I needed to bring. He emailed me back, "You will not need too much stuff, the real challenge will be to see if you can sit still and be silent for 3 or 4 hours!"

Ahh, yes. He knows me well.

In a separate paragraph of the email, after telling me that I needed to dress warmly in clothes I didn't care about messing up, he also said:

No makeup. Definitely NO perfume. No earrings that sparkle in the sun.

We had a conversation about these three things at work later that day. The no perfume made sense. The no sparkly earrings I understood. But, no makeup?

He had a point, I suppose. A deer staring down the barrel of the gun I'm about to kill him with probably won't care whether or not I'm wearing mascara or whether or not my face is shiny. But I'll care. And if I’m successful, and therefore forced to snap the obligatory hold-the-deer-by-its-antlers picture on the back of John's pickup truck, I want to look at least presentable. Plus, makeup is just part of my routine. For me, it's like putting on pants.

John just shook his head and said, "Whatever." 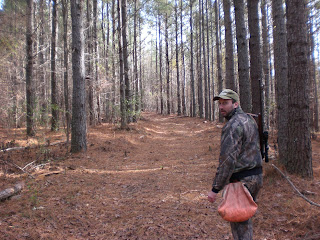 I compromised. I just wore mascara, and chapstick. That's it. I swear.

John's family has a hunting cabin and 178 acres of land about twenty miles east of Athens, Georgia. I followed him over there from Atlanta, since he was planning on hunting for several days and I was just staying for the day. He’s hard core. I am not.

In case any of you sticklers for the rules were wondering, the fact that John had this cabin, and this land was the only reason that I could actually go on this excursion without a hunting license. Apparently on private property, any complete moron can fire a weapon if the owners say it's ok. Including me!

I love cabins and mountains and woods. Or at least I thought I did. I’ve been trying to drum up support for a mountain weekend with my friends for years now, but nothing has ever panned out. But the kind of mountain weekend in my head is one in a heated cabin with a stone fireplace, vaulted ceilings, central heat and a full kitchen. We would make chili, drink microbrews and play board games. This cabin was not like that. It was the real deal, rustic kind of cabin with no heat or air conditioning. There was a stone fireplace, but there wasn’t a refrigerator or stove. All of the food and beer John would be eating and drinking for the days he planned to be there was packed in coolers.

Too bad deer season is in the wintertime, I thought. I think I could've stayed there in the summertime. But I’m a sissy when it comes to the cold, and there was no way I would’ve lasted the night in the winter months.

After unpacking John’s truck, he helped outfit me in the most ridiculous hunting getup that included olive green pants (that were so big they fit over the jeans I was wearing and I rolled the waistband), a camouflaged jacket and an orange vest. I felt like the marshmallow man and looked even worse. I sort of hoped that I might be that girl that could pull off looking good in camouflage. Unfortunately, I was not.

He then gave me a thorough lesson in gun safety, including how to load the weapon, how to engage and disengage the safety, and when ready, how to fire. My heart raced raced throughout his instructions. This was the closest I’d ever been to a gun that could actually do some damage. John then he looked at me, with a very serious look in his eye and asked me if I wanted to carry my own shotgun into the woods. 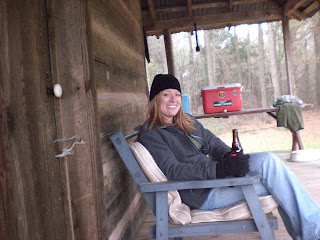 I didn’t know how to answer him. I didn’t want to not get the full experience, but I’ve also seen enough After School Specials to know how horribly wrong this could all go. Guns are scary. I decided not to carry a rifle and let John carry his. If we saw any deer (and he explained, that’s always a big if), then we could decide when we were out there who would shoot it.

We took off into the woods on a pathway that as John had earlier showed me on a map, almost split the plot of land in half. We were walking and casually chatting for no more than 15 minutes, when I saw two deer approach us on the pathway.

I looked at John, who was on my left, certain that my eyes were playing tricks on me.

"John?” I whispered through my teeth.

He continued talking, unaware that I had said anything. He was telling me about the cabin that was originally built right after the Civil War.

“My dad and my uncle recently re-stoned the fireplace . . .," he said. To me it sounded like "blah, blah, blah," as I became paralyzed with the fact that I saw at least two more deer join the first two that I already saw.

I finally stopped walking and said his name again.

He paused and looked at me.

"I think there are some deer on the pathway right in front of us," I said, trying not to move my mouth or any part of my body. 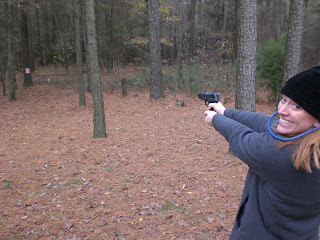 His eyes widened and he turned to look to see what I saw.

"Don't move," he said, which was completely unnecessary because I hadn't moved since I saw the deer.

Then he told me get my camera. Mixed messages, John! How can I get my camera and stay still so as not to scare the deer? But this illustrates why I love John. Because of willingness to sacrifice the deer for the sake of good blog photos. Sorry to disappoint, I was unable to get my camera, so there are no pictures, at least not of this.

We stood there, frozen for a few minutes in a stare down with the deer. Then John lifted his shotgun to his arm and aimed it towards them. I realized this could've been it. My hunting excursion could've been a success in the first 30 minutes we were out there.

John told me before we went that he had already killed three deer that season, and had a freezer full of meat, so unless I told him to, he was only going to kill what he called a "trophy buck." I think that he meant the kind that you hang on the wall.

None of these deer were "trophy bucks," but John had a clear shot of all four of them. He looked at me, us both knowing he had the shot. He actually had his choice of four shots. We were in a stare down with the deer.

Again, a question I hadn't yet considered. There we were. This is it. This is deer hunting! I thought for a moment how proud my dad would be if next week instead of some lame Christmas gift, I instead brought him a cooler full of deer meat.

And then I thought about what would've taken place after the kill. The approach to the bloody, lifeless animal and the carry back to the truck and then the processing of the meat. Would I have to be a part of that? I also saw my sister-in-law Katie's face staring at the deer meat and then at me with a look that said, "Sissy, you told him to shoot?!"

Finally, I had my answer. "I don't think I want you to," I barely squeaked out. 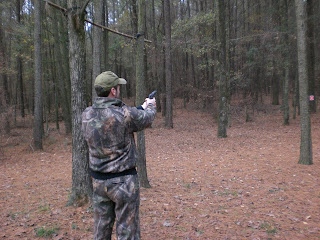 After we let the deer go and realized they probably weren't coming back because they were "spooked." I wondered if getting "spooked" meant that they sensed some hunter and his novice friend with a blog were contemplating killing one of them. Eventually they all ran away into the forest and we resumed our walk.

Seeing the deer so quickly was surprising to me. Seeing them at all was extra surprising to John. He looked at me, smiled and said, "You do understand that what just happened here never happens.” He went on to tell me that his friend hasn't seen a deer in three years. Poor guy. I saw four within the first half hour. I must be a deer whisperer.


The rest of the day we moved through the land listening for a sound that might've meant a deer was nearby. There was a lot of creeping (not in the Jersey Shore kind of way, I mean walking slowly through the woods, trying not to make any noise) and a lot of pausing, listening and crouching down. We sat for hours and just waited.

I was a pretty worthless hunter. My favorite part was using this little deer call that John let me turn over to let out a sound that attracts the deer.

I did cause a little bit of excitement when I swore I saw a buck's antlers about 50 yards away as we were leaving the woods and heading back to the house. We stopped, stayed still and waited for the shot. I'm now convinced that those antlers were just leaves on a twig. Whoops. Sorry, John.

Silence, solitude, a oneness with nature. I guess I understand why so many people like hunting. I thought it was boring, however. So boring, in fact, that I fell asleep twice. Apparently that's what happens when I don't talk for several hours.

My favorite part of the day was sitting at John's cabin drinking beers afterwards. John gave me healthy dose of advice that I was seeking the whole day but couldn't ask for because I had to be quiet. And better than other friends who give me advice, John also handed me a pistol and let me really work through my issues. I'm a terrible shot, but I didn't care.

Friends who will listen and give you advice? Good. Friends with cabins and guns? Even better.

Posted by Stephanie Gallman at 9:11 PM

Email ThisBlogThis!Share to TwitterShare to FacebookShare to Pinterest
Labels: Dad, John B., Katie