In case the title isn't clear enough, Dad, I'm going to have to ask that you not read this blog.

The 30th birthday parties are underway among my girlfriends. Actually since I have friends of all ages, the parties have been going on for several years now, but for some reason the latest to turn the big 3-0 is making me painfully aware of how quickly my big birthday is approaching.

Day 82's thing I've never done before was to attend a "Dirty 30" birthday party for two of my friends, Trish and Kyle.

The concept was simple: bring a lingerie/sex toy gift for a White Elephant/Yankee Swap game.

Dad, seriously, stop reading this. It's going to make the next time we see each other super awkward. Mom, Jeff, boss Paul, you can all stop reading too. 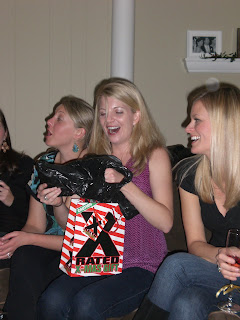 I picked up my gift at Victoria's Secret, just like I have for the countless bachelorette parties I have thrown and attended over the years. Not a big deal, I'm an old pro at this. If I'd had time I would've gone to Inserection, a completely creepy but hilarious "Adult Store" to pick up something else.

When I arrived, everyone was chatting and laughing. I could tell right away that Momo had outdone herself. There was an elaborate food display, a cranberry champagne punch bowl, beautiful decorations. I didn't know it then, but I would soon learn that her effort was far too classy for what was about to go down. But at that point, I wasn't thinking anything was terribly out of the ordinary. Just an all-girls holiday get-together. No biggie. Momo passed around a bowl full of Christmas jingle bells that were numbered. I drew #2, which meant I would only have one gift to possibly steal. Not a good number.

Kristen drew #1. I'm not sure if this was her strategy or if she wasn't wanting to take any chances because she chose her own gift, a modest pair of pajamas.

Then it was my turn to either steal Kristen's gift or open another one. The pajamas were nice, but I wanted to see what else was out there, so I chose a nicely wrapped square box from under Momo's Christmas tree and took it back to my seat. All eyes were on me as I tore the paper and lifted the lid and removed the items inside, nervous laughter spilling out from me like a faucet. 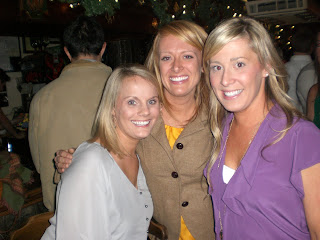 Inside the pretty little package was a red see-through teddy, crotchless underwear (yes, I just typed "crotchless") and my favorite, a pair of fingerless gloves with ribbons on the wrists, presumably for tying the wearer's hands together or to piece of furniture? The tag said, "One size fits most."

My friend Trish, who purchased this raunchy gift began apologizing immediately and profusely, reading the expression on my face for disappointment that I didn't get something better. She apparently couldn't tell that I wasn't disappointed. I was just mortified.

Everyone was laughing. I started to sweat. I think I actually said at one point, "Is it hot in here?"

Lots of questions began running through my mind at this point, including, 1. Where the hell did Trish find it? 2. What possessed her to buy it? 3. Do people actually wear this kind of stuff?

While I'm trying to reconcile the answers to all of these questions, birthday girl Kyle shouts out, "Since it's my birthday, I'd like to make a rule that everyone has to wear whatever item they get on the outside of their clothes!"

So as if it wasn't bad enough that I had to open this outfit and hold it up in front of everyone, but then I had to put it on. My face was bright red and my hands were sweating.

I don't know why I was so embarrassed. I'm 29-years-old, for heaven's sake. I have dedicated myself to writing a year-long blog revealing every personal thing about myself. Why the sudden desire to play innocent? Plus, these women are my best friends and this was a game, this was all in good fun. Why the nerves? 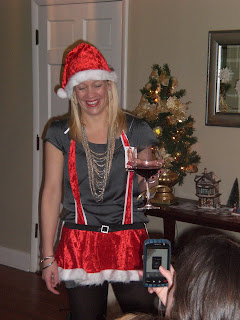 I don't know. My own reaction surprised me too. I'm not bothered by sex toys or lingerie. Except, apparently, when they are given to me.

Luckily, I sitting next to Shelley who provided just the amount of comic relief that I needed to relax. She opened several awesome gifts, all of which were stolen from her. My favorite was definitely the 'Mrs. Santa Claus' number. I'm still not sure what she ended up with.

The game moved forward and I watched with sincere interest to see the items that were most commonly stolen. My plum nightie was popular, as were all of the holiday inspired items. I also loved seeing the pleasant but annoyed looks on some of the women's faces when their gift was taken from them. For the sake of the blog not getting moved to an "unsuitable" corner of the Internet, I'll just say there were some pretty suggestive movies, toys and devices that are now occupying my friends' homes.

I had pretty much resigned myself to the fact that my bright red ensemble and matching cuffs was going to be mine forever, when late in the game, to my surprise, my newly engaged friend Melissa piped up from the couch, "Gallman, hand over the cuffs."

Wowza, Thomas is in for a big surprise. Trish, happy that her gift was stolen said to me recently, "I need to ask Melissa how that's working out for her." 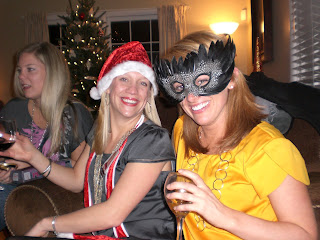 Her stealing my gift meant that I had to open another one. This time I chose Maribeth's, which was full of several goodies, my favorite being an Exotica Mask ala Eyes Wide Shut. So weird. Again, with the questions, 1. Where did she find it? 2. Are people really turned on by feathered masks? 3. Will the guys that read my blog be more interested in me now that they know I have it, and some other fun toys?

The mask did come in handy in that it let me hide from the rest of the gift-giving. It made for some awkward moments the next day, however, when I was in Charleston with my high school friend Danielle. As I was taking my luggage out of my car, her 7-year old daughter caught a glimpse of the mask in the backseat.

"Aunt Steph, what's that?" she asked, pointing at it.

Danielle and I looked at each other, trying not to laugh and Danielle said, "Karson, sometimes Aunt Steph likes to dress up in costumes."

I live in fear of my own bachelorette party.

Posted by Stephanie Gallman at 6:11 PM