Day 80’s thing I’ve never done before was get a swine flu shot.

A definite sign of the times, considering the swine flu didn’t even exist a year ago. 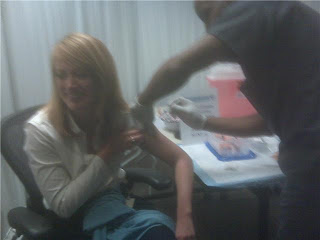 Getting the vaccine came so highly recommended, but I still wasn't sure I wanted it. I've never had any sort of flu shot. I asked co-workers if they were planning yo get it. I got mixed reviews, but supporters of the vaccine all looked at me like I was crazy for even questioning it.

I like free stuff. But this is a shot. I don’t like shots, even if they’re free.

Because maybe the swine flu is much ado about nothing? And because nobody knows anything about this vaccine?

“If you get the swine flu and come in here and affect everyone, Stephanie, I’m gonna be pissed.”

Well if you get the vaccine, then you should be safe, right?

In the end, I got the shot. Not because I was worried about getting the swine flu and not because I thought my immune system couldn"t handle it if I did. I did it for the blog. I didn't like it, though. I pride myself on being a pretty healthy person and I’m completely drug free. Free of antibiotics, prescriptions, until this day, vaccines. In my head, I was tougher for not participating in modern medicine. Getting the shot made me just like everyone else. A swine-flu free wuss.
I thought that would be it for this day. Day 80 took an unexpected turn, however, when I met my friend Melanie for dinner at a restaurant in my neighborhood, The Glenwood. The food was good, but the dinner wasn't 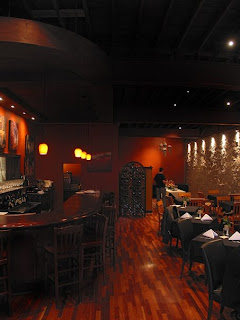 That is, until the manager of the place, an Al Pacino looking gentleman stopped by our table and invited us next door to hear the jazz band that plays there every Wednesday night. Melanie and I looked at each other and said, "Why not?"
The manager, who I will call Al, ended up treating us to a mutliple glass wine tasting at his bar. He told us of his adventures in Italy, and he knew so much about wine, we assumed he could've been from there, or at least spent a lot of time there. Al was from Georgia, though. He told us about the film "Bottle Shock" and told me I must see it (Melanie already had). Then he mixed up some White Russians and showed us how to tie our scarves the way Europeans do.
We shut the bar down, but not before we met Al's wife, who is also a restaurant manager and his son and his son's girlfriend, who both work at the restaurant. The night was so unexpected and so fun. Al refused to let us pay for any of it. He wouldn't even let us leave him a tip. It was like we were all old friends drinking at his house.
So, Day 80 was a twofer. A swine flu, wine-tasting twofer. Not too shabby.
Posted by Stephanie Gallman at 3:00 AM

Email ThisBlogThis!Share to TwitterShare to FacebookShare to Pinterest
Labels: Melanie