My desire to embrace each holiday the last year of my twenties has been evident in the activities that I've participated in for the first time. Going to New York, baking gingerbread, visiting a Christmas Tree farm are just a handful of examples.
There happened to be another holiday season going on during this time that I have completely ignored all of my life. A holiday that I don't celebrate. After my friend Lauren, who is Jewish, walked me up and down 5th Avenue amidst all of the Christmas shoppers and took me to see the Rockefeller Christmas tree, I decided it's only fair that I stop ignoring it and start embracing cultures different from my own.

In honor of Lauren and her tolerance of Christmas both in the United States and abroad, I decided to embrace her Jewish faith and make s 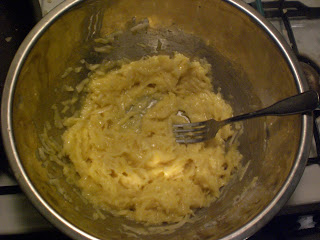 Day 77's thing I've never done before was to make latkes. I obviously had to consult Lauren on this task, as she was the resident expert on Judaism. In fact, shortly after we met, Lauren soon became the person I relied on to tell me all about Judaism, especially their holidays like Rosh Hoshannah, Passover, and Yom Kippur. I'm not sure she really wanted this job, but she took it on anyway and lucky for me, she took it very seriously.

Before long I had learned about sitting Shiva, eating noodle pie and why Jewish men wear Yarmulkes.

Latkes are potato pancakes that are, according to Lauren, "sooooooooo good." She said making them from scratch is essential. From a mix just doesn't count.

She found me a recipe that looked easy enough. There weren't too many ingredients that I would need to buy, however once again I found myself frustrated that it asked for 2 cups of grated potato without any guidance on how many potatoes it would take to achieve that. Even more frustrating was that it is impossible to buy "a" potato. Potatoes are sold in big bags.

For those of you keeping score at home, 1.5 potatoes = 2 cups grated potato

This means I now have a two pound bag of potatoes that will a. take up space in my almost non-existent kitchen and b. I will end up forgetting about them and c. they will end up spoiling and I will be forced to go on a search for the source of the gross smell permeating my apartment. I think there is a way to help improve the life of a potato, but I believe it involves panty hose. I don't own panty hose, and that sounds like far too much effort. Why, I wondered, do stores not sell one potato at a time? 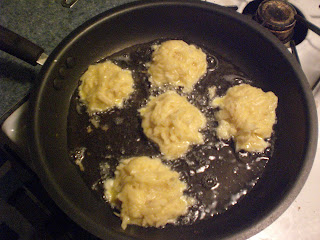 The only other part of making latkes that I didn't completely understand was drying the grated potato with cheesecloth. I've seen recipes that called for cheesecloth, but I've never actually worked with it. What is it, anyway? I used clean dishtowels instead of cheesecloth and they seemed to do the trick. Forgoing the cheesecloth for the towels meant that there was a good chance my latkes might also have terrycloth lint in them, but that was a chance I was willing to take.

Besides the whole cheesecloth thing, the latke recipe was extremely easy to assemble and easy to cook. Onion, eggs, a little flour, some salt and oil and it's not hard to make the patties and fry those suckers up. Some of my colleagues scared me that the latkes might be a little challenging, but I didn't find that to be true at all.

I told Lauren they might be worth converting for. She can have the eight days of lights, the Hora, and while it pains me to say it, even the chair dance performed at Jewish weddings.

Let me have latkes! And lots of them! No, on second thought, I think I might want the chair dance too.

Shalom! Mazol Tov! Latkes!
Posted by Stephanie Gallman at 3:00 AM