Day 60: Holiday with the Hawks

Stuck in Atlanta on Thanksgiving Day, the Day 60 thing I'd never done before was to go to my first NBA game, the Atlanta Hawks versus the Orlando Magic.

Going to a Hawks game was the last way I had planned to spend Thanksgiving. I had hoped that there might be some sort of charitable way to commemorate the holiday.

My friend John and I called several local charities the week of Thanksgiving to see about volunteering at a soup kitchen or delivering meals to the elderly. No one wanted us. All the volunteering opportunities had been filled months before, which is great for those who needed the help. Not great for those who missed their chance to help out. Since this would've been a first for me, I admit I was surprised that there were an abundance of volunteers during the holidays. The people that I spoke to on the phone almost sounded offended that I would even try, the week of Thanksgiving, to help their organization.

It was as if they were saying, "Where the hell have you been the rest of the year?"

Since helping others was apparently not going to be possible this holiday, I was going to have to try something else. That's when Mo, always the man with the plan, said, "I've got tickets to see the Hawks on Thursday. Let's go."

I've lived in Atlanta for five years, get free tickets to see the Hawks and still haven't been. Shameful, I know. 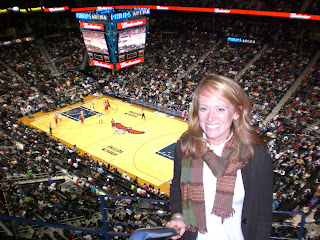 I'm really not a huge professional sports fan. I don't dislike professional sports, but I grew up in Columbia, South Carolina and we don't have any pro sports teams. My parents are from Ohio and I remember as a kid rooting for the Cincinnati Bengals and the Cincinnati Reds because my dad did, but my allegiance to both of those teams has wavered over the years and I don't really follow either team anymore.

But maybe after five years, this was my opportunity to start paying attention, my time to get excited about my local sports teams.

I figured if there was any way I was going to like the Hawks, it would be going to a game with Mo because he's probably the biggest and well-connected sports fans I know. He's also one of the luckiest and he's always stumbling upon SEC championship game tickets, $600 in raffle winnings, and club level seats to this Thanksgiving day showdown. Not too shabby for my first game.

We arrived at the game and I was surprised at how many people were there. I guess the excessive eating and family time had really worn everyone out and they were looking for a chance to escape the togetherness for a little bit and take in some professional basketball. I don't blame them. I have a family too. I understand.

From the moment we went to our seats, my eyes were darting all over the place. There was so much to look at, I found it hard to focus. What I love about the professional sporting events I have attended is all of the miscellaneous activities that go on separate from the actual game. This game was no different. It had the trivia games, the mascot antics, the kiss cam, dunking contests. I love stuff like that. These gimmicks make games fun for even those without any vested interest in the team. People like me. 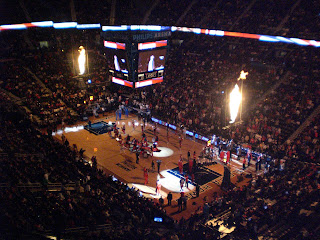 The teams were still warming up when we got there. When it was time to introduce the starters for the game, I was pleased to see that it went down just like it does on TV. Phillips Arena went dark except for a large spotlight shining right on players as they rose from the bench. The announcer gave his best, "Let's get ready to rumble" voice and called each starter's name. That player would then slap his teammates a high-five before taking his place on the court. The only thing I noticed that was different from how I had seen it go down was the enormous torches above each of the backboards that were ignited, lighting the place up with flames. It was exciting, in a I-hope-they-don't-burn-this-place-down kind of way.

A former dancer myself, I was most excited to see the dance team, the A-town dancers. They didn't make their first appearance until well into the first half. I don't know if I built them up too much in my head, but I was really disappointed. They were pretty girls and their costumes were cool, but their performance was lackluster. I considered maybe they weren't giving it their all because they were still full from Thanksgiving. Regardless the reason, they seemed off. I realize I am a has-been dancer still living in the past, but I swear I could do better. I know at least my 16-year old self could have. 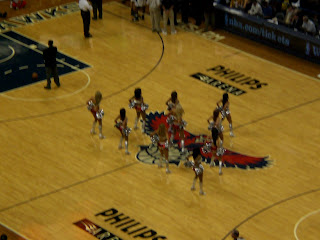 Party" for one of their routines also threw me off. I didn't know whether to be embarrassed for them or proud of them for extending Kim's 15-minutes of fame a little bit longer.

Midway through the game, a couple of ladies wheeled a dessert cart around with the most decadent and elaborate cakes and cookies I've ever seen. I found this completely odd, and not fitting with the sporting event vibe, but wanting to really experience the Hawks game and everything that entailed, I had no choice but to eat something from the cart. I chose carrot cake, figuring if carrots are in the cake then it's actually good for me. Right?

The ladies also had Gran Marnier, that they poured into a chocolate shot glass. At a basketball game? Really? I was happy with just cold draft beer, but if this is the way it is done, I'll play along. 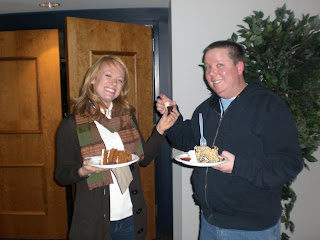 They pulled out a trampoline at one point and a line of performers, including Skyhawk, one of the Hawks' mascots, starting using it to make some pretty impressive dunks.

The best part came when Harry the Hawk, the other mascot, starting freak dancing on one of the referees. The referee stood there, looking stoic and staring straight ahead while the Harry danced all around him. The crowd was going crazy, when all of a sudden the referee broke rank and started booty dancing too. It was a decoy referee! Hilarious.

As for the game, I did watch some of that too. I was in constant amazement at how big the players are. I kept checking my program to see if my eyes were playing tricks on me, or if indeed, Orlando's Dwight Howard is 6'11" with a 7'9" wing span. He is a beast. I have a new found respect for the players and the game. It was fast moving and exciting. I was impressed, despite the Hawks losing to the Magic, 93-76.

As we were leaving Mo said, "why do I get the feeling that you're going to talk about flames, dancers, and cake in this blog entry and hardly mention the game at all?" He knows me too well.

The Hawks may have lost, but I considered myself a winner. First NBA game down, and likely many more to go.
Posted by Stephanie Gallman at 1:15 AM