Missing old friends, with plenty of vacation to burn, I decided to make Day 73's thing I've never done before to travel to New York during Christmas time.

The nature of my job is that I work with lots of people over the phone and through email, so coming to New York and seeing my former Atlanta colleague and friend Elise, meant that I was also getting to meet and see some of my own New York colleagues as well.

Most of the time, these meetings are awesome. 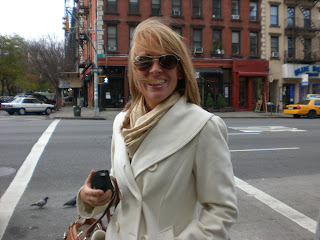 Sometimes, though, it's awkward. Like when someone smiles and shakes your hand as you tell them your name and you watch as the name recognition falls on their face. Their smile fades as they say, "Stephanie? Oh right...I recognize your name from all of your emails."

This is not a compliment and I never know quite how to respond. Usually I say something like, "Yep. That's me. The one behind all of the emails. I swear I'm a nice person."

I did get to meet a lot of very nice people that I've been working with over the phone (and through email) and it was a treat. I was also reunited with those who I hadn't seen in months.

But the trip wasn't about work. It was a chance to get away from work. I'd been to New York several times as a tourist and for a job interview, so this was my opportunity to see the city, holiday style.

I was not disappointed. There's just something about a big city that gets to me. And not just New York. Boston...San Francisco...Chicago. Give me reliable public transportation and decent weather to walk in and I'll fall in love with any city.

New York is the premier big city, and enjoying it during the holidays was super fun. The cold air, the window displays, the super stressed shoppers and cheesy holiday tourists. Awesome!

My plan for night one was to meet my friend Julian for a few drinks while I waited for Elise to get off work.

A few drinks with Julian turned into dinner at Momofuku, followed by more drinks in the East Village. 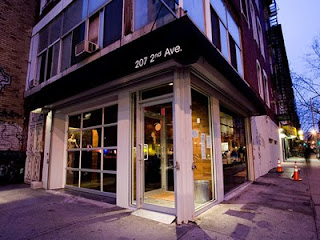 Momofuku was such a stereotypical New York City restaurant to me. Loud, dark, and busy (even on a Wednesday). Fortunately we didn’t wait too long. They seated us across from each other at a long high top table crowded with other couples. We sat on bar stools and began our feast that included oysters, steamed pork buns, and duck (I think. It was dark in there.).

I drank cold sake, too, which was a first. I always thought sake was served warm.

After dinner, Julian walked us to what I assumed was a hot dog restaurant. “Crif Dogs” was on the awning outside. I was terribly confused, as I had just eaten a pretty awesome (and expensive) dinner. The last thing I wanted was a hot dog.

I started to question things when Julian shot me a look like, "Trust me, I'm from here."

I couldn't argue with that, plus I just drank a half a bottle of sake, so I had no choice but to trust him. When we got inside, Julian poked his head into a phone booth inside the restaurant and told a woman we were a party of two. She said the wait was an hour. 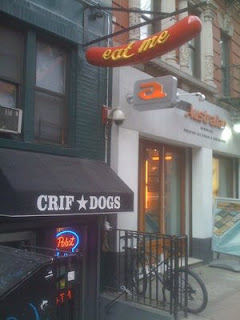 “Where the hell are we,” I thought to myself. I've certainly waited for tables at restaurants and I've waited in lines outside bars, but I've never put my name on a list to be given a wait time from a hostess at a cocktail bar.

But this, I soon learned, was no ordinary cocktail bar. This was PDT (Please Don’t Tell). An aptly named fancy speakeasy hiding inside a hot dog restaurant. So secretive. So exclusive. So annoying that we had to wait an hour to get in.

Though the wait was off-putting, I actually enjoyed the fact that this place keeps the number of people inside to a minimum to create a certain mellow atmosphere for its patrons. Perhaps the name meant, “Please don’t tell the tourists, we want to keep this a secret.” That’s what it felt like.

It also could’ve meant, "Please don’t tell anyone that we only serve mixed drinks with dark liquor." Yikes.

It certainly meant, “Please don’t talk,” at least not loudly. I think the bartender shushed me at least four times.

It definitely also meant, "Please don't take pictures. We don't want you to have any recollection of this night." 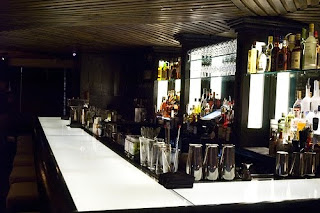 Looking back on it, PDT could’ve been named that for other reasons.

Please don’t tell the friendly gay couple sitting next to us that Julian and I are not a couple like they thought. I think they’d be really disappointed.

Please don’t tell my parents that there are parts of this night that are a little fuzzy.

Please don’t tell anyone that even though I had just eaten, I secretly wanted a hot dog.

By the time Elise met up with us, we had been going strong since happy hour. She probably wished PDT meant, "Please don’t tell me to come meet you if you’re acting this ridiculous." Not a fun scene to walk into when you've been at work all night, and I apologized profusely to her the next day.

I'm not sure the lights of New York were inspiring me that night like they do Alicia Keyes, but my trip to New York was off to a great start.
Posted by Stephanie Gallman at 12:44 AM