My cousin David has been a supporter of the blog since he found out about it and he suggested a long time ago that when Christmastime rolled around, I should go to a Christmas tree farm and cut down my own tree.

I wasn't sure if metro Atlanta had such farms, but I liked the idea and it's holiday potential, so I filed it away and vowed to make it happen.

David wrote in his Christmas card to me that he was considering his own Project 39 to 40 for his own big birthday this year, and I haven't told him yet, but I'm completely supportive. David has young kids, so the possibilities are endless. Write emails in Haiku for an entire day (I'm considering this one myself)? Drive the girls' carpool blaring gansta rap? Organize a neighborhood talent show and make yourself a part of the act? 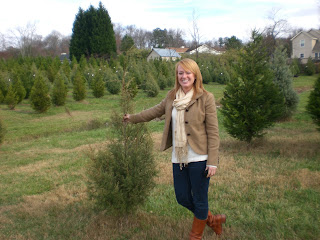 David, if you're reading, I totally think you should give your own project a go. Call me and we can discuss more ideas, but please make "embarass your kids," something that you do at least weekly.

I digress. In honor of the holiday season and David's suggestion, Day 70's thing I'd never done before was to go to a Christmas Tree farm.

Like pumpkin patches, Christmas Tree farms do exist near the city, but it's a little bit of a haul to get to one. I did some research from the comfort of my own bed on Sunday morning. There were many to choose from, but for a variety of reasons, including they were open on Sundays, I chose Thompson's Tree Farm.

I hadn't told Lisa, fearful that if I did she wouldn't come with me, but I went out to this farm not entirely sure I was going to cut down and purchase a tree. I live alone, and just wasn't sure I wanted to deal with the hassle and the expense of a tree if only I was going to see it.

I realize that totally sounds single-girl depressing. I truly don't mean to sound that way, I definitely didn't feel that way. My reasons for not wanting to buy a Christmas tree are really the same reasons why I don't have a pet. I travel a lot, I stay out late, there are many weeks when my house is just where I sleep and shower. I wasn't a Scrooge, I was just trying to be realistic.

After a few wrong turns, we headed down a street a neighborhood. I was convinced I was still going the wrong way, but then I saw the sign for Thompson's Tree Farm. I pulled into the driveway of a lovely white house where a teenager wearing an orange safety vest instructed me to park on the grass to the left.

I assumed that the Christmas Tree farm would be a lot like the pumpkin patch I visited in October. But this farm was definitely smaller and I could tell right away that there weren't nearly as many people there.

We walked towards a building next to the driveway looking confused (because we were). One of the farm employees recognized we were not familiar with the operation and he explained that we could take a saw with us out to the farm and cut down our own tree, or they would do it for us. Lisa and I told him we wanted to take a look first and that we'd come back when we found the one we wanted. 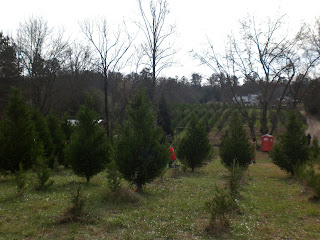 Before we headed out to the farm, Lisa asked where the restroom was and the guy responded, "just head into the garage..." It was then that it occured to me that this is where the Thompson's live! We were literally standing in their driveway. I realize Christmas trees are the Thompson family's livelihood, but I couldn't help but feel sorry for any family member that might've just wanted to "hang out." So much for lounging around the house in pajama pants and a sweatshirt dozing in and out of Sunday afternoon football. The driveway and house were crawling with people. No lazy Sundays in this household. It was time to sell some trees!

This garage had card tables set up inside with a variety of crafts for sale. In the back, there was complimentary cider and hot chocolate. I fought the urge to go straight for the refreshments. We instead made our way towards the trees that were in perfectly symmetrical rows lined up behind the pool in the backyard of the house.

She took off to the left towards a fenced in area of the yard where there were about dozen goats milling about.

"Goats really like me," Lisa said matter of factly. 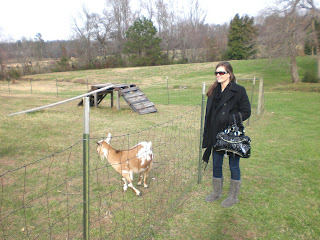 Lisa grew up in Atlanta, so I considered this briefly. I wondered how many goats she had encountered in her young life to make such a statement. She went on to explain how she had made such a connection with goats, but I checked out of the conversation, thinking of my own encounter with a goat.

When I was little, a goat got loose on my family's farm in Ohio and he chased my cousin Susan and me onto the top of my dad's car. I'm sure the goat was just trotting around doing no harm, but I was so young and the goat was so much bigger than me, I was scared out of my mind. I've hated goats since that day. But I love goat cheese.

The goats were not giving Lisa the attention she sought, so we moved on. I had already decided at that point that I was not going to get a tree, but I enjoyed watching the other families pick theirs out and sawing them down. I also saw a few trees that were tagged, and presumably already sold. Some of them were over $100! I had no idea Christmas trees were so expensive. I made the right decision to not get one.

I did feel badly that we had just cruised the farm without contributing back to it, so I decided to take a look at the crafts in the garage and possibly purchase one of those. The only thing I found in the craft garage worth taking, however, was the complimentary cider. 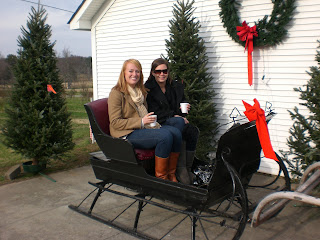 We snapped a picture in a sled and started making our way back to the car when Lisa stopped suddenly. I watched her take a couple of dollars out of her purse and stuff it into a can next to the garage where the farm was taking donations.

"Just a little something for the goats," she said.

Our friend Kyle called as we were making our way back.

"What are you doing?" she asked me.

"Oh Lisa and I are just returning from a Christmas tree farm," I responded, laughing.

"Why did you go there?" she asked, "Why didn't you go get a facial or something? That's something you haven't done before, right?"

Christmas Tree Farms, like pumpkin patches, are probably better suited for families, or at least those actually intending to get a Christmas tree.

I went to the Thompson Christmas Tree Farm and all I got was a picture in a sled and a free cup of cider.

Posted by Stephanie Gallman at 1:09 PM