Day 69 was the day of the SEC Championship, which I watched at a bar with a large group of my friends.

Possibility for fun, embarrassment, and something I've never done before: extremely high.

Only as the game went on, nothing was really presenting itself. And soon it became clear that Florida was not going to win this game. 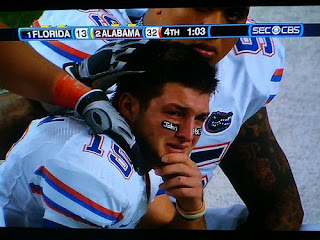 I hate to do it for all my Florida fans, but I have to say Day 69's thing I'd never done before was see a grown man cry over a football game. That grown man was Tim Tebow.

The second I saw it, I had to look away. I hate seeing men cry and I hated everyone at the bar loving that Tebow was crying. I am a Georgia Bulldog all the way, so I'm supposed to hate Florida, which I do. But I don't care what team you pull for, you cannot deny that Tebow is a stand up, classy guy. And he's so damn good. I've tried to find reasons to hate him, but I haven't found any.

Seeing him cry did not sit well with me.

"Well, if you feel that badly about it, maybe you should make out with a Florida fan and cheer them up," one of my friends said to me.

Get serious. I felt badly, but not that badly.

Among our conversations that night was the Tebow effect. Someone told me that the Bible verse he wears in the paint under his eyes is often the number one item searched on Google the Sunday after he plays. So in addition to seeing him cry, I also joined thousands of other football fans and looked up the Bible verse Tebow wore that day.

John 16:33 says, I have told you all this so that you may have peace in me. Here on earth you will have many trials and sorrows. But take heart because I have overcome the world.

I'm certainly in no position to teach any Sunday school lesson, but I like the idea that someone is bringing peace into this very unpredictable, chaotic world.

Posted by Stephanie Gallman at 12:46 PM