Day 75 was my last day in New York, and there was a lot I wanted to accomplish. I was determined to make it a productive day, starting first with tackling an exercise class at Physique 57.

I first heard about Physique 57 from my favorite celebrity, Kelly Ripa. She credits her ripped arms and rock-hard abs to these classes. 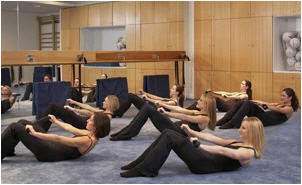 So before I even got to New York, I told Elise that I wanted to take a class there. I know, I'm lame. Who puts "take an exercise class" on their list of things to do in New York? But either a testament to Elise's lameness too, or her awesomeness as a friend, she agreed to come. I insisted she didn't have to, and told her that I didn't mind going on my own, but she actually sounded excited about it.

According to their website, Physique 57™ is a focused and proven cardiovascular program of isometric exercises and orthopedic stretches. I have no idea what any of that means. I saw ballet bars in the pictures and assumed that because we were both former dancers, Elise and I could handle it easily.

Turns out, I was wrong.

I was intimidated walking in there, but I think that had everything to do with the fact that it was New York and that Kelly Ripa works out there, not because of the way anyone treated us. That intimidation soon faded when we met the instructor. She was so nice and bubbly, I thought for sure she'd go easy on us. Plus, it was a beginner class. She told us to grab 3-5 pound weights and I was soon certain we'd have no trouble.

The movements were easy. The class was not. The instructor would show us a move, we'd do a lot of reps quickly, stretch, and then we'd go to the next move. Some of the movements were ones I had done before, but others were different, and a little awkward. We did use the ballet bar, but only for balance while we did some killer squats using a playground ball. 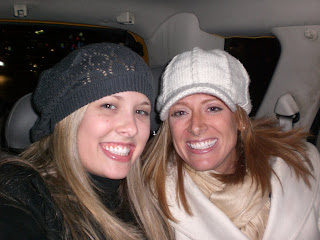 Elise looked at me midway through and said, "I think I need to leave." I didn't know how to respond. She'd lost a lot of color in her face, but I didn't know if she was kidding around because the class was hard, or if she was truly feeling ill and wanted to get the hell out of there.

I nodded in understanding, but what I should've said was, "If you want to leave, just say the word." I didn't want to go, but I didn't want my friend, and hostess, to suffer through the nonsense any longer than she wanted to.

Elise did leave and never came back, meaning she wasted $30 on the class that I suggested we take. She wasn't sure what made her feel ill, but blamed it on the fact that she really hadn't eaten a lot the day before and hadn't worked out in several weeks. I finished the class and was disappointed that I left looking no more like Kelly Ripa than I did when I came in.

On the way out, I saw Justin Long, the guy in the Apple commercials, also known as Drew Barrymore's on-again, off-again boyfriend in the lobby of the building. When we got outside I said to Elise, "Wow, that was cool, the Apple guy."

She didn't really respond at first and then she said, "Wait. Steve Jobs (the co-founder and CEO of Apple)?"

I laughed out loud. "No!" The guy in the commercials!

Even we drove right by the building again, she kept an eagle eye peeled for a possible Justin Long sighting, but no luck.

I thought this last day in New York was not off to a great start, especially for Elise. First the class, then missing out on seeing Justin Long. Her spirits were still up, though, and she suggested we do brunch, which is my favorite meal ever, before she had to be at work. It'd have to be a quick one, but I knew we could do it. And we did, with time to spare. And still feeling badly that I was so far the worst guest ever, I insisted I'd pay.

Elise went to work and I had the rest of my afternoon free to roam the streets of New York. 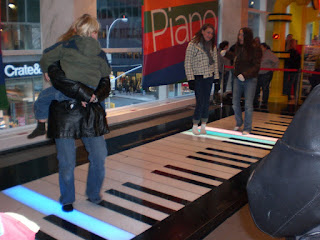 It just so happened that Lauren, my friend from DC, was in the city that Friday for a wedding. She's from New York and she agreed to take me to do Day 75's things I've never done before: see the Rockefeller Christmas Tree, go to F.A.O. Schwarz and walk up 5th Avenue to see all of the Christmas window displays.

The fact that Lauren, a native New Yorker, was willing to suffer through all of these touristy stops makes her alone a great friend. What makes her an even greater friend is that Lauren is also Jewish. And this was the first day of Hanukkah.

This isn't the first time she's suffered through Christmas with me, either. Last year at this time, she and I were in China and Thailand on a three-week vacation. I was bummed before we left, thinking that I would miss Christmas season, one of my most favorite times of the year. Much to my delight, however, and Lauren's dismay, Christmas was everywhere in Asia. Christmas trees, Christmas lights, and her favorite, Christmas music.

I loved it. She did not. 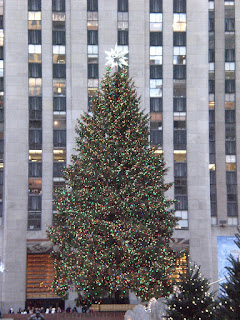 Still, she marched me all over town, starting first at F.A.O. Schwarz, New York's famous toy store. If you've been reading this blog from the beginning, you probably are aware at how much I hate to wait for anything. Due to the huge crowds this store draws around the holidays, there was actually a roped off area set up down the side of the store for lines of people waiting to get inside. Luckily, we didn't have to wait too long, but I found it to be a little ridiculous to have to wait in line at all to get into a toy store.

F.A.O. Schwarz's biggest draw is definitely the big piano featured in the Tom Hanks movie, Big. There was yet another line to wait in to get an opportunity to tickle the ivories, so I decided to instead just enjoy the live performance put on by the toy store staff. Just imagine, if you will, that a tall, super-lanky, uber-cheesy guy with a headset microphone was jumping around the big piano clapping wildly in an effort to get everyone excited and involved in the show. C & C Music Factory was playing in the background.

This little show was five-times better and more embarrassing than that. It was hysterical. There were times when I had to look away. And my only regret is that I was so dumbfounded, I forgot to take a picture of it. But the memory will be forever burned into my brain.

We walked down to the Rockefeller Christmas Tree and ice-skating rink. The tree is massive and beautiful, just as I expected it would be. I asked a teen aged boy, who had just been forced by his parents to pose for a picture with his siblings, to take a picture of Lauren and me. I assumed he understood that since we moved to stand in front of the tree, that we were hoping for a picture of the two of us and the tree. He may have needed more explicit instructions, however, since now I just have a close up of the two of us. The tree is in the background, though, I swear. 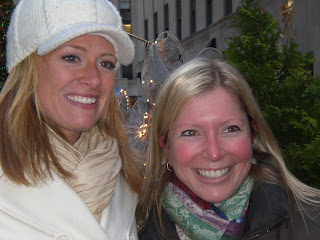 The ice-skating rink at Rockefeller was a little less impressive than the tree. It was much smaller than I thought. Or perhaps the massive amounts of people skating made it appear smaller than it actually is. Lauren and I weren't skating ourselves, but did enjoy watching people who despite the crowds and small children on the rink, couldn't resist their opportunity to show everyone their ice-skating skills. They were performing turns and jumps like they were in training for the Winter Olympics.

Seriously folks? That's a little much.

Fifth Avenue was packed with shoppers, but we walked up and down the street anyway, enjoying the beautiful window displays. Lauren told me they used to be much more elaborate. We figured it must be a sign of the tough economic times.

After grabbing some coffee and heading back to Lauren's hotel to help her get ready for the wedding rehearsal dinner, I went to a tasty Italian dinner by myself and headed back to 5th Avenue, this time to shop for something to wear to my office Christmas party.

Even in the shopping capital of the world, I was unsuccessful on that front.

Still, a New York style workout, an afternoon to enjoy the holiday sights and the opportunity to catch up with old friends. I'm glad I made the last-minute decision to make the trip.