After visiting the Christmas Tree farm, I was feeling the Christmas spirit. I decided to channel that jolly attitude into a holiday baking challenge. I didn't know it then, but this day ended up kicking off an entire month of me making holiday foods that I'd never made before.

I'm combining these blog entries, because really what is there to say about gingerbread? 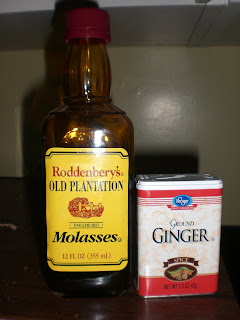 Like usual with food challenges, I did have to go to the store to pick up the ingredients. I needed eggs and this would be my first experience with molasses. Oh, and ginger, of course. Makes sense and seems obvious, right? Only I got home from the store and realized that that I forgot it. Genius, I know. I'm all for substituting and making do with what I have in my cabinets, but since "ginger" was actually in the name of the recipe, I figured I needed to go back to buy it.

Baking the gingerbread was pretty uneventful after the whole ginger episode. I'm pretty grossed out by molasses, but I understand where the idiom, "slow as molasses in January" comes from now. According to the Internet searches I did, molasses is just a form of sugar. Maybe so, but sugar doesn't scare me like molasses does. It's weird.

When I finally executed the recipe, I was a little disappointed in the results. The bread was okay, but the best part was the cream cheese frosting the recipe called for. Not so disappointed that I didn't follow through on my plan to drop the gingerbread off at my local fire station the next day, however.

I shared my plan with a friend and he said, "That's weird. I'm embarrassed for you."

Besides food envy, my second biggest fear in life is someone being embarrassed for me. I embarrass myself daily, so I'd rather not have someone else suffer those emotion on my behalf. I hated that this guy thought this idea was this bad. He clarified that he felt like it was something an older person would do. Like an 80-year old grandma, maybe?

I did not come up with the fire station drop off on my own. I read it in a holiday book that suggested dropping off bread or cookies at the local police and fire departments as a nice way to thank the volunteers for the work that they do for us.

Another friend teased, "Is this just your way of trying to meet firefighters?" And my answer to that is a resounding, "NO."

I had no makeup on and was wearing workout clothes, I was not in search of dates, I was truly on a mission to deliver baked goods. That's it. Plus, if you must know, I'm not really into firemen. 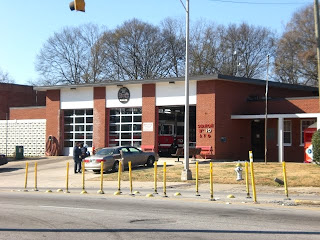 Turns out, dropping off baked goods was not at easy as I thought it would be.

I walked over to the fire station and expected the garage doors to be open like they are every time I drive by there. But the whole place looked like a ghost town. I wondered if they'd been called to a fire.

I tried to go through the side door, but it was locked, so I rang the bell and waited.

And waited some more.

I considered just leaving them outside the door, but it had started to rain and I thought this disappointing gingerbread would be disgusting if it also turned soggy. And then a fireman opened the door.

And suddenly I got nervous. What is it with me and doing nice things for other people and acting so weirdly about it?

I said something completely lame like, "Uh...I'm Stephanie and I live in the neighborhood and I just wanted to say thanks for all you do...and uh...drop this off."

And then I shoved the gingerbread into his hands like a moron.

He smiled at me and politely said, "I think you guys are trying to kill us. But thank you!"

Apparently there had been other goodies dropped off there by other friendly neighbors. Soon our volunteer firefighters are going to be fatty firemen.

And then I turned around and walked to my car. And that was it. And I again made the decision that I had to start doing nice things for people more often so that I would stop acting like such a freak about it.
Posted by Stephanie Gallman at 11:08 PM