By the time Christmas week had rolled around, I had O.D.’ed on holiday sweets, thanks to a constant flow of cookies, cakes and fudge at work. I'm not even counting the fabulous recipes I had tried out for the first time. My waistline was expanding, and I was getting a little sick of the sweets, when another food challenge came to me by way of my friend Bug (real name: Jennifer). 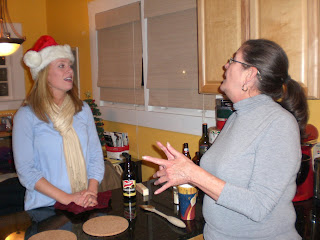 Bug and I had been trying to get together before the holidays and I suggested a Wednesday night dinner. She said fine, but said that was also the night she and her mom (Susan) were going to be making Chex Mix for their neighbors and friends. I had never made Chex Mix from scratch, so I asked if I could join in their family tradition and make that Day 87's thing I've never done before.

So I went. For dinner and some Chex Mix. Which actually ended up being more like Chex Mix with some dinner, because the second I arrived there I started eating some of the mix that Susan had already made. Apparently the sweets hadn’t completely filled me up.

I wasn’t the only one, either. In between games on the Wii, Bug’s husband, Sean and her brother, Scott (also good friends of mine) would take frequent timeouts, grab a handful of Chex Mix and then head back to play more. Did I mention we’re all grown adults, not 8-year olds? We were childlike, almost, spoiling our dinner with Chex Mix.

While waiting for dinner to cook, Susan gave me a crash course in Ch 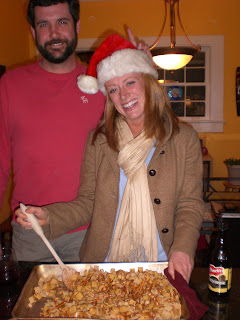 ex Mix preparation, going first to the corner of the kitchen where she pulled out a large white trash can filled more than half way full of already mixed Chex cereal (corn, wheat, and rice), Cheerios, pretzels, and several kinds of nuts.

I like Susan's style. It reminds me of something my own mother would do. My mom cuts pizza with scissors. She would be in favor of mixing an obscene amount of Chex Mix in a trash can.

I wanted to dive into that trash can, but I refrained.
Bug brought out Christmas hats while Susan brought out a pan and a few simple ingredients, including butter, Worcestershire sauce, some garlic and onion powder. Again, just like my own mom would, Susan casually threw some ingredients into the pan. She instructed me to pick up the Worcestershire sauce and pour it in.
"How much?" I asked, as I started pouring, concerned there was no measuring.
"That's enough," she replied.
At what age do women who cook stop using recipes and measuring cups. Is that an age thing? Is that what happens when I turn 30? Is that when I'll just "know" how much onion powder to throw in there?
After all of the butter mixture was put together, we went to the trash can and scooped out several cups of the mix and threw it in the pan. Susan told me to stir the Chex mix with the butter mixture. 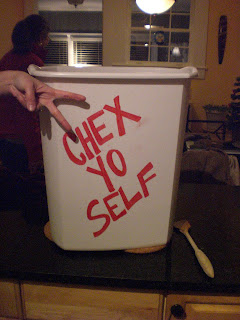 "And that's it," she said. "Now we put it into the oven for 15 minutes, take it out and stir it again. For an hour."
Chex Mix is easy! Time consuming, but easy.
For one hour, I monitored the timer closely and took out the pan to stir the mixture. My diligence completely paid off because when it was done, it was awesome.

Though not easy for her to do since she normally just makes the mix from memory, Susan managed to write down her recipe for me to take home. After a few glasses of wine, I showed my thanks with a Sharpie, decorating Susan's Chex Mix trash can, hence the name of this blog.

I think of all the holiday treats I have sampled and made myself, Chex Mix might be my favorite. They sell bagged Chex Mix in the grocery store year-round, so must I wait until next Christmas to make this again?
I don't think I can.
Posted by Stephanie Gallman at 1:03 AM