On September 5, 2009, my brother Jeff married Katie, making him a husband and me, a sister-in-law. Their Charleston wedding weekend was a blast and such an awesome way to kick off their life together as husband and wife. The union meant the whole family gained a new and awesome addition.

After their wedding, Katie and Jeff went to Hawaii for their honeymoon and I returned to Atlanta. I hadn't seen either of them since their wedding, so Day 62's thing I've never done before was to hang out with my brother, as a husband. 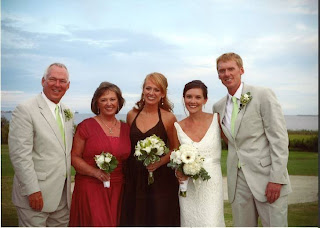 I didn't really think that this was going to be a ground-breaking day for me, and in many ways, it really wasn't. Having watched dozens of friends get married during my twenties, I know that most people don't change who they are just because they get married. They're the same people, just with wedding bands and matching stemware.

I think maybe part of me was hoping that my brother might be different, that Katie would put that ring on his finger and we'd all hold hands and skip through fields of flowers, singing like the Von Trapps.

That's not exactly how things played out the first day we hung out. My brother's 31. I'm 29. Wedding band or not, he's still my brother. And to him, I'm still his annoying little sister.

Katie just makes all of that much easier to take.

Our day of hanging out commenced early at the South Carolina/Clemson game, where Husband Jeff proved that marriage hasn't slowed him down at all and he still likes to go out and have a good time. The Gamecocks won, handedly, which helped everyone have a good time.

The celebration continued into the night and the day concluded with Husband Jeff proving that he is still full of as much advice as Brother Jeff ever was. When I asked him to weigh in on a relationship question, he did so with gusto. And just like old times, I swallowed it right up. Even more than before, his advice has become like the gold standard because now he can throw it out there and then give me a look like, "You really should listen to what I'm saying because as you can see, everything really is working out for me."

His delivery could use a little work, but I still trust what he says and I think he often tells me the 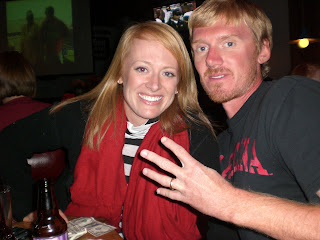 The greatest thing about my brother being a husband, is that it means now I have a sister. I'll spare you the speech I gave at their rehearsal dinner (which was legendary, if I do say so myself), but Katie really is a great addition to our family. She's my friend, and an ally. Plus, I think she really likes hanging out with me, so even if Jeff doesn't feel like it, he'll suffer through for her sake.

The second greatest thing about my brother being a husband, is to see him truly love and care for someone the way he loves and cares for Katie. It's pretty awesome. I know, I know, this blog has taken an unexpected emotional turn. What can I say? It's my family.

Jeff is different as a husband. He's better. And we're all better with Katie around.

But he's still my brother, and it appears no matter how old we get, my brother he will always be. And I'm so thankful for that. Most of the time.
Posted by Stephanie Gallman at 1:44 AM