Since I can remember, my family has never participated in the shopping mayhem known as Black Friday. If it means we don't have to wake up at ungodly hours and battle crowds, we're happy to pay full price. We may even pay extra. Yes, we're happier doing our shopping on the two or three days leading up to Christmas when the crowds are equally as bad, and the pressure of having mere hours to get it all done is also upon us.

I'm not sure this approach is much better, but regardless, the Gallmans do not involve ourselves with Black Friday shoppers. We scoff at them.

Mo was also in for this challenge. He suggested we leave the Hawks game, and choose a store that opened at midnight. That way we could get our shopping done and still make it to work in the morning. Mo chose Brandsmart USA. 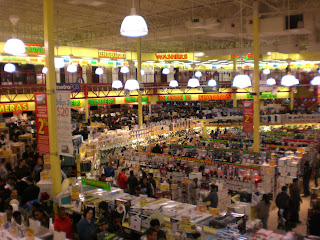 If you're not familiar with Brandsmart USA, you may be familiar with their poorly produced commercials that pan the interior of the store while flashing different items, yelling the price, $58.88! $188.88! $798.88! Everything ends in eight at Brandsmart. Nobody knows why.

Before we went, Mo let some of his friends know that he was headed to there to do some early Friday shopping and asked if anyone needed anything. I've sent offers like Mo's to my friends before to be nice, never expecting anyone to actually take me up on it. Mo's friends are different.

Mo and I were doing this Black Friday thing for the experience. None of the merchandise we'd planned to buy would be considered a "hot ticket" item. No pushing or shoving over a Crockpot. But a TV? Jose's request upped the ante significantly. We actually had something to really go for. 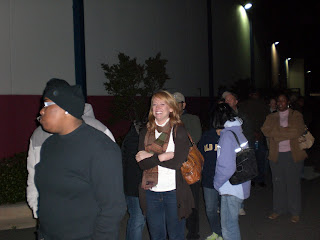 Mo and I left the game, and drove straight to Brandsmart USA in Doraville, Georgia. We received some insider information that at 11:15pm, there were only around 30 people standing in line outside the store. If that was true, we reasoned, then the odds were certainly in our favor. We might just get that TV for Jose.

But by the time Mo and I arrived at the store, there were not just 30 people there. Either our intel was bad, or 1000 more showed up in the 15 minutes it took us to get there, because when we arrived, the line stretched in front of the entire length of the store, down the side and around to the back. We got in the line behind the store.

It was really cold that night and I was not all dressed appropriately to stand outside for this nonsense. Luckily Mo and I made friends with a guy standing in front of us and within five minutes of meeting him, I was huddled up next to him and his fuzzy jacket like we'd been friends for years. He didn't seem to mind.

We stood there and watched as families showed up to take part in this experience. And by families, I mean small children who were woken up in the middle of the night, stuffed into coats and scarves and brought out into the cold so that mom and dad might score a great deal on a flat screen television. I do not have children of my own, or a flat screen TV for that matter, so I will reserve my judgment for another time, but why? Why would you do that?

At around 11:55pm, the line started to move for us in the back, which meant Brandsmart must've opened its doors earlier than midnight. I was thrilled to get out of the cold. The line moved fairly quickly and before I knew it, we had made it to the front of the building just in time to see customers leaving with television sets! They had already been in, bought what they were looking for, and now they were leaving.

The sight of happy customers got my adrenaline pumping. I was excited, and a little nervous. I couldn't stop thinking of all of the horror stories about midnight shoppers getting trampled or knives pulled on them while shopping for Nintendos and Tickle me Elmos. I hoped I wasn't destined to meet the same fate. We made a vague and always-subject-to-change plan to go for the television first, and then get the rest of the stuff. We assumed that TVs were likely to go a lot faster than George Foreman grills and toasters.

We continued our approach to the front doors when we heard the line get stopped about ten people behind us. We just made the cut to get in during the first round. I felt badly for those who didn't make it, but only for about 3o seconds. I was ready to get my Black Friday on! Those people should've arrived earlier!


We finally made it in and moved directly to our left. Not quickly, though, because the gridlock we were in outside the building basically just moved indoors. We couldn't really get anywhere fast, so I had a moment to look around the store. I was dumbfounded. Brandsmart is insane. Not just because it was Black Friday, but because it just is. It's multiple floors of floor to ceiling electronics. Absolute pandemonium.

Mo and I finally descended upon the motherland of TVs in the back and searched wildly for the Sharp Aquos. We didn't find it immediately, but lucky for us we are young and shopping cart-free, so we were darting around people and displays like gazelles.

I lost Mo for a brief moment and in that time he found a young man who had a Sharp Aquos, the very flat screen TV we were in search of, on a cart.

"Hey friend," Mo said to the kid, "Where did you find that?"

The boy responded, "I don't know. But I don't want this one, you can have it." Mo, once again, proved that he is the luckiest person that I've ever met. If I ran into that kid and asked him where he found that TV, he probably would've said, "None of your business, bitch!" as he was stealing my purse. But Mo finds him and gets the exact TV we were looking for.
So now that we had the TV that we were after, we had to figure out a way to move it around the store so that we could get our other items. It was a 40" television set, so this was not an easy task, especially in a labyrinth of a place like Brandsmart USA. On Black Friday. We eventually had to take turns moving around the store while the other one stayed with the TV.

When it was my turn to search for a toaster for my parents, I took off down the aisle like I was on Supermarket Sweep. I think I just got carried away in the excitement of it all because I was obviously the only person in Brandsmart buying a toaster. There was absolutely no need to run or even walk quickly to obtain this toaster. There were several to choose from and I could've had any one of them. No pushing, no shoving, no fighting required. 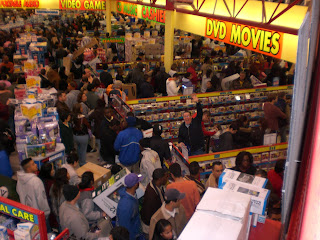 I picked out my toaster, and then let Mo pick out a Crockpot, a chocolate fountain (weird), and a punch fountain (sounds like someone is having a party). Then I went and retrieved for us two George Foreman Grills for the families our departments had adopted for Christmas.
By the time we finished all getting all of these items, it was only 12:30am. Seven items in half an hour? Even I was impressed, and I love to shop. Getting to the checkout lane was a small miracle, however, as we still had the giant TV and a shopping cart to contend with, plus every other shopper, plus numerous displays, and a set of stairs. By the time we got in line to pay, I was spent.
Not good, especially since paying for our merchandise ended up being the most difficult part of the evening. People were shoving, and cutting in front of us. And, just my luck (not Mo's luck), our cashier was probably the slowest of all 20 they had working that night. I felt like we stood in line forever.

Mo and I made it through Black Friday tired, but relatively unscathed, with my SUV full of discounted electronics and kitchen appliances. I'm not sure the deals were worth the hassle or that I would ever participate in the drama again, but it was indeed an adventure.
And my parents are enjoying their 4-slice Oster Side by Side Toaster with the retractable cord that I bought them for $28.88!
How could they not? It was bought with love on Black Friday!
Posted by Stephanie Gallman at 11:41 AM