The running joke between my friends and me has always been that keeping any pregnancies in the group would be nearly impossible during the unpredictable first trimester. We'd recognize the one odd ball not drinking alcohol and know immediately: she must be pregnant.

Some have gone to great lengths to pretend they were drinking by pouring water into beer bottles or ordering cranberry vodkas, without the vodka. Other have given up on trying to be sneaky and have just come right out with it. 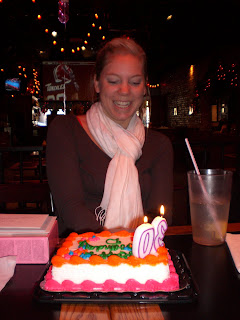 "Listen up, everyone. I'm not drinking because I'm pregnant. I'm not very far along, but I knew you all would wonder or think that I was lame. So there it is."
My friend Doris broke the news about her first pregnancy when I brought her a bottle of Firefly Sweet Tea flavored vodka and she sadly had to turn it down.

My friend Rebecca hadn't even been to the doctor or talked to her parents yet, but when I saw her drinking a bottled water at a tailgate instead of a beer, I knew she was pregnant. I blurted out, "What's with the water? Are you pregnant?" Her eyes widened and she whispered, "Yes, I think I am. But I haven't told anyone so don't say anything!"

We're not alcoholics, but it just so happens that most of our social functions involve alcohol. Is that bad?

Doris' 30th birthday was in November, and since she is pregnant with her second baby, a typical celebration was not really an option. So Day 63's thing I've never done before was to throw a non-alcoholic adult birthday party.

The execution of the celebration was a joint-effort with Doris' husband Jeff, and the stars really aligned for us. Everyone quickly came on board and made the effort to get to Milledgeville the Sunday after Thanksgiving. Trish and I were going to be driving back to Georgia from South Carolina and our other friends were either in Atlanta or Athens.

The plan was for Jeff to get Doris to the Brick, one of her favorite hangouts in Milledgeville 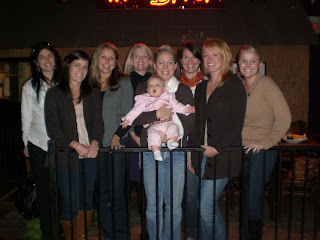 where we would all be waiting to pull of the surprise. Jeff said she was a little suspicious when he requested that she come inside with him to pick up takeout, but she came anyway and when she walked in, she ran towards us.

We brought balloons, cake and flowers; it was like a little kid's birthday party, for a 30-year old. We even had a special guest appearance by Doris and Jeff's daughter Izzy, who most of us had never met. It was a fun little Sunday. Surprising to all of us, we don't need alcohol to enjoy ourselves. All we need is each other.

When we imagined our 30th birthday celebrations, I'm not sure that this was the rowdy time Doris expected, but I know she was happy to see all of us and we did have fun. No alcohol needed.
Posted by Stephanie Gallman at 1:45 AM