My family is big on tradition, especially at Christmas.

Up until a few years ago, my mom used to read, “Twas the Night before Christmas,” to my brother Jeff and me every Christmas Eve. When we were children, listening to her read us the story made perfect sense. The tradition lasted well into our adulthood, however, and we eventually found ourselves drinking wine as she read it to us,still in a dramatic voice, still changing the words from, “laying a finger aside of his nose,” to “laying a finger inside of his nose,” cracking herself up. If she's desperate for grandchildren, I think it's just so she'll have someone new to read it to. 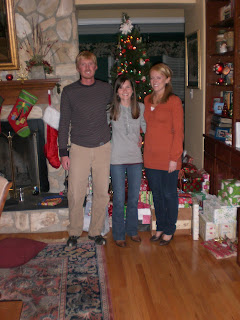 Another tradition in my house, also started by my mom, is the celebrity gift tags on all of our presents. Unlike the other kids in the neighborhood who received presents from “Santa” and “Mom & Dad,” I’ve received gifts over the years from Strawberry Shortcake, Carrie Bradshaw, and Oprah. Jeff gets presents from Jerry Seinfeld, Steve Spurrier, and up until his recent troubles, Tiger Woods.
My dad has made a tradition out of checking the living room before anyone else is allowed to go in there to "make sure that Santa came." Santa hasn't been coming for many years, but my dad makes this a big production every year.

Jeff tried to add, “Getting drunk on bourbon and eggnog,” to our list of Christmas traditions, but he was the only one who could actually stomach an entire glass of eggnog, so that one fell flat.

Certainly, I thought, there is something out there that I bring to the Gallman household that could stand the test of time like the crazy gift tags and, “‘Twas the Night before Christmas.” My sister-in-law Katie's debut Christmas with our family deserved it, so Day 89’s thing I’ve never done before was to start a family Christmas tradition.

But what kind of tradition?

I asked this question of myself and out loud to my co-workers a few days before Christmas. 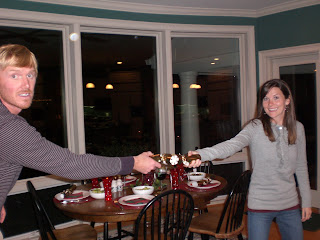 My colleague Sara heard me and said excitedly, “Does your family do Christmas Crackers?”

Fatty over here heard "crackers" and immediately thought Sara meant crackers like Saltines or Wheat Thins. I furrowed my brow, indicating confusion. I had never heard of such crackers.

Sara continued, "You know, like the little favors that you pop open? With the paper crowns inside?"

I shook my head, still confused. Sara saw my blank look, walked over to my desk and pulled up a website on the Internet to show me.

Once I saw a picture of the cracker I knew what she was talking about. Kind of. I’d definitely seen them before, but hadn’t ever participated in this tradition. Christmas crackers, I learned, are a part of English holiday celebrations. They are cardboard tubes with little toys inside. Two people hold on to each side of the cracker and pull it a part (like a wishbone). Whoever gets the bigger side gets to keep all of the goodies inside the cracker. 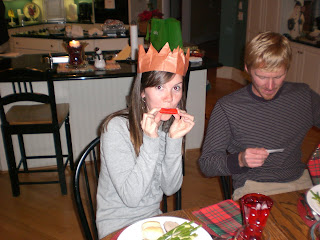 “Well what kinds of things are inside,” I asked, hoping she would say diamonds, or money.

I kept asking Sara questions, like where do I find Christmas crackers? How much do they cost? How did she know about them?

Sara told me her mom is responsible for bringing Christmas crackers into her household after she learned of them from her English neighbors. They’ve been a part of her family’s Christmas celebration ever since.

Sara was happy to lend me the idea, and even willing to pick up the Christmas crackers for me when she picked up some for herself at Party City.

I liked the Christmas cracker tradition already. Good, cheap, non-alcoholic fun for the entire family. No work. No stress.

When I arrived in South Carolina on Christmas night, I announced to my family that I was starting a family tradition for the blog. With Christmas crackers! They all looked at me like I was ridiculous, which I’m used to, but after a couple of drinks, and opening a few gifts, everyone was much more agreeable and they played along.

Jeff and Katie grabbed their crackers first and pulled. I was expecting a “pop” that would indicate the cracker had been cracked, but it was far less dramatic than I had hoped. 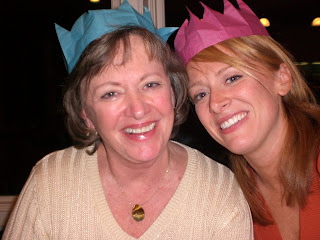 But just as Sara promised, in each Christmas cracker, there were toys, a joke, and a paper crown.

I demanded that everyone put their crowns on. My sister-in-law, the trooper that she is immediately complied and began to play with the whistle that was inside.

Mom and Dad went next, and again there was no exciting “crack,” but soon we all had a toy, we all read our jokes aloud, and we all were wearing paper crowns. Even my dad, whose crown ripped a little bit (I think his head is on the bigger side) left his on through our entire dinner.

I guess we won't really know the success of this challenge until next year to see if Christmas crackers are a part of Christmas 2010. But if I have anything to say about it, the Gallmans will all be wearing paper crowns to dinner next year, and every year after that.
Posted by Stephanie Gallman at 9:53 AM