A little less than two weeks to go, and Christmas was starting to stress me out. The holiday unfortunately always gets to me at some point. Adding work and the challenge of doing something new everyday and I was super stressed.

What to do when I can't think of anything else? Cook.

Day 78's thing I've never done before was to make a fruit cake.

Anytime someone says the words (or is it word?), "fruit cake," a negative reaction almost always follows.

Fruit cake is the dense, Christmas dessert with brightly colored candies and God knows what else in it. I've never eaten fruit cake because every fruit cake I've ever seen looks completely disgusting. I've definitely never made one. 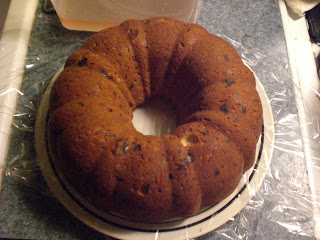 I found an Emeril Lagasse recipe for Creole Christmas Fruit Cake with Whiskey Sauce. I had high hopes. First, it's Emeril. His stuff always looks good. "Creole" in the title sounded promising too. Plus "Whiskey Sauce?" Whiskey makes everything better. If a tasty fruit cake exists, I figured Emeril was behind it.

Making fruit cake, I quickly learned, was not the cake walk (pun intended) that I hoped it would be. It did not help my Christmas stress level whatsoever. Fruit cake is involved, and requires a great deal of preparation. It's also expensive, calling for assorted dried fruits, three different kinds of nuts, and two different kinds of liquor. I spent at least $35 on a cake that I was pretty sure I wasn’t going to like and pretty sure no one else would eat once they found out it was fruit cake.

If this blog is going to make me poor, which it’s starting to already, I’d prefer it to be on exotic trips to places I've never seen before. Not on Gran Marnier knockoff liquor and a 1/5 of Jim Beam required to bake a cake.

The assembly of the cake mixture was pretty standard. There was a lot more chopping and measuring than usual because there were so many more ingredients, but the cake turned out beautifully. It looked pretty, anyway.

Fruit cake is one of the few things that I've ever made that is not supposed to be served right away. Emeril told me to put the fruit cake in cheesecloth and put it in a plastic freezer bag. Not having either of those things, I left the cake on the plate, wrapped it in coffee filters and covered it with plastic wrap. That’s kind of the same thing. Right?

Everyday for week I had to unwrap the cake and douse it (through the coffee filters) with a bourbon sugar mixture. I'm not sure the filters were an appropriate substitute for cheesecloth because the syrupy liquid just sort of went everywhere. The cake, which grew staler each day, eventually sopped it up, though, which I think was the point.

When I finally was able to cut it, I was impressed at how well it turned out. Other fruit cakes may be gross, but mine and Emeril's was great!

I’m warning you, there are more holiday food entries ahead, but here’s where we are so far:

Fruit cake = tasty, but not at all worth the expense or the trouble.

So far, Christmas food was not really stacking up, though I did make believers out of some of my co-workers who tried my "Christmas" cake a week later when I brought it into work. I didn't tell anyone it was fruit cake. What they didn't know didn't hurt them. They liked it!
Posted by Stephanie Gallman at 9:58 AM