It was my friend John (Christmas Party John, not Hunting John) who came up with this idea and though I rarely see movies, I was happy to go along, for the blog. John also suggested we get Filet-o-Fish meals from McDonald's beforehand, but I didn't want to blow two blog entries in one day, so we're saving the fish for another time.

I like movies, but I hardly ever go. If I do go, I rarely see big blockbusters like this one. If everyone else likes it and it has a cult following and people are camping out for tickets, (think Twilight, Harry Potter, Lord of the Rings), I've probably never seen/read it. I'm a positive person, but for some reason, anything with outrageous popularity often becomes unattractive to me.

For the record, I have tried to read all of these books. Maybe there's something wrong with me, but I think Twilight is for 16-year olds, I think Harry Potter is for 13-year olds and I think Lord of the Rings is for 30-year olds who still live in their parent's basement. I did have to watch Lord of the Rings for a college class and didn't hate it as much as I thought I would. I doubt I would watch it again, though. 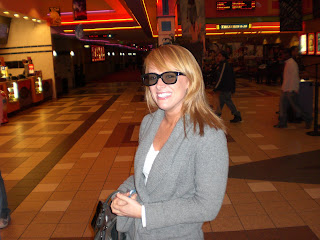 There's just something about fantasy and the supernatural that turns me off of these films as well, so I was a little concerned about going to see Avatar. I find real life drama to be way more interesting and complex than anything someone could make up. I'd rather immerse myself in that than in wizards and vampires and avatars. I worried that I'd look at John during the movie and say, annoyed, "Oh, like this could really happen!" Uh, yes, Stephanie, that's actually the point.

Usually when people go to the movies, there is a great deal of discussion about what movie the group will see. Well we already knew we were going to see Avatar, but there was still a lot of conversation because there are at least three different ways to see the film. There's Regular (2-D, I'm assuming), Suped Up on 3-D, or Super Suped up on IMAX. Our IMAX theater wasn't offering it, though, so John and I went 3-D.

The ticket sales guy gave us our individually wrapped glasses along with our tickets and I noticed immediately that these were not your average cardboard 3-D glasses. They were actual plastic frame glasses. Not. Attractive. In fact the style prompted a conversation about BCGs (Birth Control Glasses), as they are called in the military. John's brother used to make BCGs in the Army.

Still, I was excited about them and demanded that John take my picture while we were standing in the concession stand line so that you can see just how unattractive they are.

We got our snacks (read: industrial sized popcorn and enough soda to drown us) and took our seats just in time for my favorite part of going to the movies: the previews. Odd, since I will likely never see any of the movies they are promoting. But I love it when they edit all of the film's best clips and set them to music. I almost always look at the person sitting next to me and say, "That looks awesome. I can't wait to see it!"

I didn't know much about Avatar prior to going into the film, other than James Cameron created it and he's the genius behind Aliens (the sequel to Alien, which I didn't know until movie buff Ben pointed it out) and Titanic. He had the idea for Avatar many years ago, but couldn't make it happen because the technology didn't exist to execute. I know that everyone measures success differently, but I think we can all agree that if you come up with an idea before the technology even exists to make it happen, you are a success! And as of this writing, Avatar is the largest grossing film of all time. Double success!

I've read since that people experienced motion sickness while watching the film, but I fortunately did not. I found the glasses and the experience to be a little strange at first, but after a half an hour, I was used to it and I was fine. It was like I was a part of the action, swinging from branches in Pandora and riding the dinosaur/bird-looking things. I wouldn't be surprised if the viewers in front of John and me got motion sickness, as they were partially watching the film and partially text messaging for the entire two and a half hours. 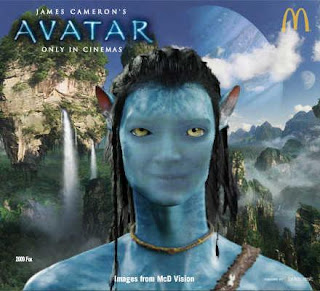 I wanted to hate Avatar just because everyone else was talking about how amazing it was, but I couldn't. The story, the 3-D and special effects, were all really cool. It was great. I didn't even mind that it was epic long or that it was make believe. I was thoroughly entertained the whole time. The quote I've used numerous times telling people what I thought about the film: "Seriously, I hate shit like this and I loved it. Go see it."

John sent me an email the next day with a link to an article (click here
Posted by Stephanie Gallman at 10:07 PM