For most of my high school and college years, I gave a lot of guys (well maybe not a lot, but some) the proverbial "Heisman," arm when I felt there could be feelings developing, hoping that if I kept them at a safe distance and our relationship on the surface, things would never get messy or complicated, or worse, ever come to an end.

If I never let anyone really into my heart or into my life, I thought, then such an ending would never come. We could live happily ever after. As friends.

There may be a list of complex issues here like fear of intimacy or commitment, but I hid behind all of that saying to any eligible suitor, "I don't want to take this to the next level, because I don't want to ruin our friendship."

That is, until I met Mark.

I don't know what about him was different, but after we met and went out on a few dates, I decided to take a chance, allow myself to deeply care for someone else, and together we built a life together.

And it was a fun-filled, hilarious life that we enjoyed for four and a half years that carried us through an assortment of different jobs and moved us to two different cities. We were out of college and therefore considered adults to society, but really we were babies navigating the real world for the first time together. 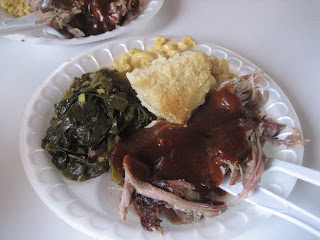 As we grew up, and started sorting out who we really were, it became painfully obvious that there were fundamental differences between us keeping us at odds often. After months of anxiety and fighting the same fight over and over again, we ended things on Memorial Day of 2007.

For me, the end of our relationship felt like a divorce. We never lived together, but after four and a half years there was still the separation of belongings and friends, followed by countless sleepless nights and several accidental and consequently tearful run-ins. The break up was mature, and void of drama, but it was brutal.

As we tried to sort through our new singlehood, I tried hard not to blur the lines of our now different relationship, always avoiding opportunities to hang out, certain that in a moment of weakness, I could and would return to the comfort of him and the easy parts of our relationship. And I feared that regardless of how good it felt to be back in the ease of his company, we'd likely end up at the same place again.

I knew for us to be together would likely mean that one of us would have to change. And there really isn't a need for that, because I believed then, and I still believe now, that we're both pretty awesome just the way we are.

When I started this blog, Mark, in his hilarious, sweet way, no surprise, emailed me to wish me good luck and remind me that 18-holes of golf with an ex-boyfriend is definitely something I've never done before and would make for "excellent blog fodder."

I couldn't disagree with any of that, and part of me thought it might be fun to go. I asked my friend Kyle what she thought.

"No. Don't go," she said, without even pausing to think about it for a minute.

"Really?" I asked. I had a feeling that's what she'd say, because she, like all of my friends, were sad when our relationship ended, but agreed that hanging out opens up the opportunity for confusing things.

"I don't want you to write about Mark in the blog," she said, almost desperate. But I could hear in her voice her concern wasn't for me. It was for him.

Apparently she assumed that if I went on this outing with him, that what would follow would be scathing, potentially embarrassing commentary about Mark. But anyone that knows Mark and knows me should know that would be impossible. What could I possibly say? 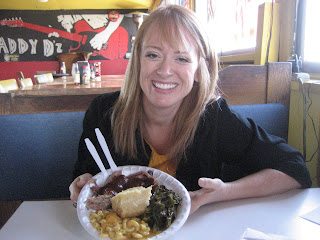 We never did go golfing, but recently Mark contacted me, asking me to go to lunch. He wanted to show me his portfolio from The Creative Circus, an advertising school he just graduated from, and, he said, "I wanted to know if you'd link to my web site from your blog."

I mean, of course I will link to his website, http://www.mark-pantsari.com/, though I'm concerned he may have a distorted view of this blog's true reach. I mean, I'm not Oprah. I can't just casually mention, "Please check out Mark Pantsari's website," and people will just flock there in high numbers.

But just for fun, let's test it out.

Day 177's thing I've never done before was to go to lunch with my ex-boyfriend http://www.mark-pantsari.com/ at Daddy D'z barbecue.

I had never been to Daddy D'z barbecue, a dirty (and I mean that in every good way possible) little joint near downtown Atlanta. The place completely lived up to the hype. I got pulled pork, macaroni and cheese and collard greens. The food is ridiculously good and contrary to Mark telling me that I wouldn't, I smelled like a smoker for the rest of the day.

But let's get serious, this is not about the barbecue, or about eating at a place I'd never been to (though that's what the pictures will show). This was about Mark and me, one-on-one for the first time in almost three years.

I have to be honest, I wasn't really nervous about going to lunch with him until I told other people that I was doing it. My friend Lauren, who doesn't even know Mark, was nervous for me and wished me good luck numerous times before I left.

I arrived ten minutes late, apparently wanting to prove to Mark that I'm still the same girl that I was when we dated.

He showed me his portfolio from advertising school, a school that I believe is made for people with Mark's ridiculously dry wit and juvenile, sometimes inappropriate, make you want to piss yourself sense of humor. I am highly impressed of the campaigns he's come up with and nervous about the daunting job market that he's facing. (If you are looking for a copy-writer, please consider http://www.mark-pantsari.com/ for all of your advertising needs).

He told me he'd move anywhere if the job was right, but that he really wants to move to Austin, Texas. I told I'm in complete support of that decision because Austin is a super cool town and I think he'd fit right in. I didn't tell him that I think it would be weird if he moved away. And then I remembered it doesn't really matter what I think.

I hate to disappoint everyone, but there was no drama. We laughed, we joked around and then we parted ways with a hug. I left feeling proud of the people we became while we were together and who we've become since we broke up. I felt most proud that he is the person I have to measure all of my other relationships against.

Like any good friend, I will promote him and his hilariousness and his copy-writing skills all day long (seriously if you haven't gone to http://www.mark-pantsari.com/ then there is something wrong with you). And I wish for him a very big life full of success and love. I want him to be happy. Isn't that what friends want for each other?

Yes, but I also want all of those things for myself. And I want them first. See, now that's the ex-girlfriend talking.

Maybe there is far too much emotion between Mark and me to ever make a true, honest friendship work. I mean, I wrote this entry easily, but when I read it aloud to my friend Maribeth, I cried. And then she cried. Twice.

Mark is an avid music fan and over the course of our relationship, he introduced me to many bands. One of my favorite albums that came out when we were together was a collaboration between bluegrass band Nickel Creek and Toad the Wet Sprocket's Glen Phillips called "Mutual Admiration Society."

I couldn't help but think, when we were sitting across from each other at lunch, that maybe we can't ever be best friends, but that Mark and I had grown into our own Mutual Admiration Society. In admiration of each other, and of the time we spent together. And yes, I suppose, of the delicious barbecue we were eating as well.

I told him I would and I already have, but I will pimp his website one more time, check it: http://www.mark-pantsari.com/
Posted by Stephanie Gallman at 8:00 AM