Finally, my trip to Lake Tahoe arrived on Day 158.

Thanks to my inability to get my act together in advance, I made it to the Delta ticket counter just in the nick of time to make my flight to San Francisco. Unfortunately, however, I did not make it in time to for my luggage to come with me. Because I only own one suitcase that is not small enough to carry on, I was forced to take the next flight out of Atlanta four hours later.

"Cry," Elizabeth texted me from San Francisco when I told her I was going to have to take a later flight because I couldn't check my luggage.

Her idea to play the emotional card was wise, but would not work for me for several reasons.

1. I cannot cry on demand. Cry for absolutely no reason at all or when it's completely inappropriate and downright crazy, well, that I can do. But when told to cry, I find it impossible.

2. The ticket counter person was a woman. A seemingly no nonsense, void of feelings type of woman. So even if I could've cried on demand, something tells me my tears would've been for nothing.

3. The FAA rules require baggage to be checked a minimum of 45 minutes before a flight departs (Is this really true? That's what unsympathetic ticket counter lady told me. If she was telling me the truth, then this probably should've been reason number one.)

I chose to accept my fate, get on the 2pm flight and make the best of my time in the airport. 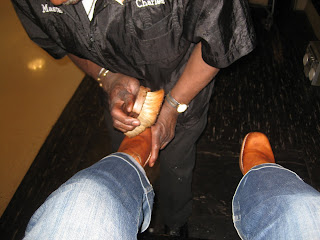 Making the best of things meant spending money on overpriced items like scarves, coffee and 24-hours worth of Internet access. Fifteen minutes into my four hour delay and I'd already spent $40.

I had to find something cheap to do, or I was going to be broke before the trip even started.

I decided to get my boots shined by the airport shoe-shine guys. I have seen businessmen get their loafers shined for years and always thought it looked like a fun thing to do. So I climbed into the shoe-shiners chair and asked him to polish my boots, which he did happily.

He was a jovial shoe-shiner, whistling and humming while he worked. As I watched him, I thought of my dad shining his own shoes, which he has been doing since I was a little kid. Unlike my dad and his worn out shoebox full of old undershirts covered in shoe polish, though, these shoe shiners had real wooden boxes full of actual shoe shining equipment. He shined with finesse and put on a little show.

When he was done, I was amazed at how great my boots looked and pleasantly surprised that the shoe shine only cost $6, but also bummed that entire experience only lasted a total of 15 minutes, leaving me with still plenty of time to kill before my flight.

On the other hand, I considered this good news for the future. Even if I have minimal time before my next flight, I do have time to get my shoes shined, and I will do so more often. And I'm not trying to tell anyone what to do, but do this. Do it now.

I wandered around the airport for a little bit longer before settling down and getting to work on the blog. I’d set a goal to be caught up on writing before I left, but that didn’t quite work out. So I wanted to use my time away from all my real-life distractions and write. Airports have their own kind of distractions, however, and though I was able to get some entries done, I was doing my fair share of people watching. 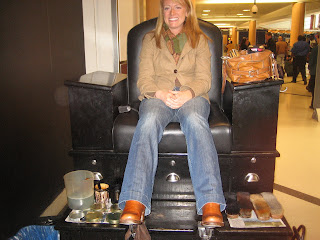 The remaining time went by fairly quickly thanks to the $10 Internet access I had purchased. I surfed the web, wrote the blog, sent emails just like I was at home. Once I boarded the sold-out flight, I purchased Wi-Fi on the plane as well, allowing me to post a blog entry from at least 10,000 feet in the air (something else I've never done before).

I sent an instant message to Elizabeth from the plane that said, “Greetings from the friendly skies!”

Elizabeth hates to fly, so the thought of me surfing the web and contacting her from the plane nearly sent her over the edge. I found it to be odd too that the only place I used to be able to really disconnect is now wired as well.

"This is freaking me out," she typed.

We exchanged a few messages, but she was sending me short answers, sincerely uncomfortable at the thought of me sending her updates from the plane. When my computer battery started to drain, I quickly alerted Elizabeth that my time online was coming to a close. I didn't want to abruptly sign off without an explanation, knowing that she, like me, would’ve instantly assumed the worst and been on flight tracker making sure my plane didn’t go down in a fiery crash. So I told her I'd see her in a couple of hours and turned my computer off.

The plane landed safely and I took the BART to meet Elizabeth and her friend Cynthia, who I had met the last time I was in San Francisco. I was a little anxiety-ridden seeing her again, considering the state of mind I was in that day. She and and Elizabeth helped me load my large suitcase onto the bus and I used our short ride to prove to her, and to myself, that I'm really a nice, normal, happy person.

Elizabeth and Kristof live in a great apartment in Russian Hill. They both agree that the best part about their place is the view, which is truly awesome and has to be one of the best in the city. Before heading out to dinner, we went up to the roof so they could point out some of San Francisco's landmarks. 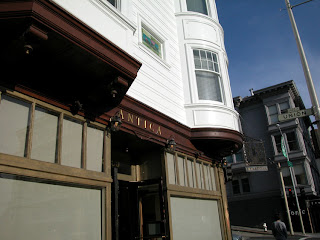 We walked to dinner at a charming Italian restaurant in Russian Hill, Antica Trattoria. Kristof ordered three glasses of Prosecco, a dry sparkling wine that I'd never had before, and we toasted my arrival to the Bay area.

Elizabeth asked me if I'd like some buratta and prosciutto for an appetizer.

Like the Prosecco, I confessed I'd never had buratta. I hadn't ever had to ask what buratta was. I was sure by this point Kristof thought that I was a huge redneck who's only eaten Italian food at the Olive Garden.

Elizabeth dove into a description of buratta that included words like "intestines,” "fatty," and a few others that sounded completely unappetizing. I nodded my head enthusiastically, willing to try anything once, but still unsure why I'd never heard of this mystery pork byproduct.

When the waitress brought us the plate, Elizabeth smiled and said, "I was just kidding. Buratta isn't a part of a pig. It's cheese."

I couldn't help but think, as I glanced around this beautiful restaurant with my former roommate Elizabeth and marvel at how much our culinary tastes have improved since the days of Totino's pizza and Ben & Jerry's Chunky Monkey ice cream. Now we're drinking Prosecco, and eating buratta. This is change I welcome.

While enjoying our meals, which were delicious, an older gentleman, probably in this late 50s walked into the restaurant with two much younger, very attractive blondes. I had my back to them, but Elizabeth said she'd assumed the group was a father and his college-aged daughter and her friend. An assumption that I likely would've made too, even though the girls were certainly of age to legally date this man.

Now that I'm an adult, if I'm ever with my dad and it's just the two of us, I try and make it abundantly clear to everyone in our vicinity that this older man that I'm with is my DAD. “My FATHER and I would like a table for two…I'll take two tickets for me and THE MAN WHO RAISED ME. . .This is POPS, just in town for a visit.” In my mind I know that there is no way anyone would ever assume we were anything but a father and daughter pair, but just in case, I want everyone to be sure.

"Oh my God, they're making out," Elizabeth whispered to Kristof and me. I was immediately upset that I chose the wrong side of the table to sit on.

I couldn’t help it, my first instinct was to look. I darted my head back and to the right where the man and two young women were standing. I missed the making out but noticed that one of the women was standing awfully close to the older guy. I turned back to my dining companions and we continued our meal.

Old guy and his two blondes were seated in a corner table behind me.

Elizabeth's view of the trio was ideal, and again, I was disappointed that I chose poorly the side of the table that I was on. She could look straight ahead and over my shoulder to see what was happening behind me. Though there was absolutely no way I could casually turn around to look without it being obvious what I was doing, Elizabeth's horrified expressions were a good indication that whatever it was, was awesome.

She gave us a detailed play by play that included midmeal kissing, sharing utensils, and likely some under the table touching (she couldn't say for sure because she couldn't actually see any hands). Gross, skank, and sick were also words she used.

Kristof, Elizabeth and I convinced ourselves that the women were female escorts hired by this guy. A speculation I found both sad and entertaining.

Eventually, I couldn't be polite anymore and I just turned around in my chair to see what was happening behind me. Elizabeth had every right to be horrified. The old guy was sitting in between the two younger women on one side of the table. They were lost in each other, almost beligerent, and completely unaware that they were being watched by nearly everyone in the restaurant. Again, I missed any overt signs of hooking up, but they were sitting so close to each other, I was uncomfortable. 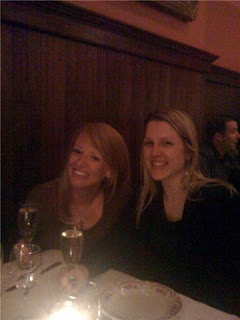 That this man wanted to go out and fool around with two hot young blondes is not surprising. That these young women would willingly come along and participate in this little show at a once respected San Francisco Italian restaurant is mind boggling to me.

As quickly as they came into the restaurant, they left.

Presumably, "because his little blue pill kicked in," the waitress said. When we asked her what she knew about the group she could only confirm that everyone in the restaurant, including the cooks in the back were glued to the action.

She also said the man in the trio dines at the restaurant often, usually by himself. He is such a creep, she no longer waits on him. Yep, I'd say that sounds about right.

We finished up dinner and went to meet another friend of Elizabeth's, James, who had just returned from Mexico where he had been celebrating his birthday. We tried, unsuccessfully, to talk him into coming to Tahoe with us.

James told us about growing up and coming of age in West Virginia that included stories about water beds and his best friend Angel before it was time to go home and rest up for the big trip to Lake Tahoe.

I was tired after being up for nearly 24 hours, but so glad to be back in the Bay area.
Posted by Stephanie Gallman at 9:00 AM