I think I'm in love with my hairdresser.

Actually, I know I am. And I know it’s not particularly newsworthy. Aren’t all women in love with their hairdressers?

Not to mention, I’ve been singing Moses, my beloved’s praises since he came into my life in January of 2007, thanks oddly enough, to my then-boyfriend Mark who introduced us. 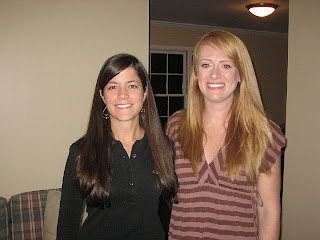 “Who highlights your hair? It’s beautiful," he asked me when I sat in his chair and rubbed his hands through my grossly long, strawberry blonde mane.

"Well, I guess God does," I joked. With the exception of one crazy Saturday in college when my dorm mates and I, along with a box of Clairol, turned me into a frosted blonde, I have never had my hair professionally colored.

Flattery gets you everywhere with me, so his compliment sealed our friendship; the haircut he gave me sealed a more important relationship and since that day, no one else has ever cut my hair.

Like any great boyfriend, Moses is nice, cool, good-looking, and straight (I know you were wondering). He's a great listener and he's fun to be around. I only see him 4-5 times a year, but our relationship is solid. It's healthy. We don't play games. When I call him, he answers, or he calls me back immediately.

He's dependable, and he's been there through the highs and lows of my life, and my hair, over the last three years. When we first met I was in the process of growing my hair out so that I could cut it off and donate it during a charity event. Losing nine inches of hair at once was a shock, but Moses eased the pain for me, and for my friend Emily, who cut her hair too.

Emily was the first of my friends to meet Moses, and now she and her husband Scott are clients. I've never shared any of my other boyfriends, but I trust Moses completely and I want him to succeed, so in addition to Emily and Scott, I've also shared him with my friends Lauren, Karen and Amanda.

Moses is supportive of me too. He told me to go for it when I told him about going on a trip with someone I hardly know. And he offered, when I told him about the blog, to take me to a strip club so that I could, "make it rain." Not exactly blog-appropriate activity, but his heart was in the right place. 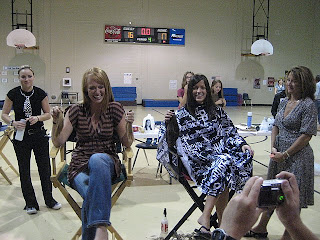 The love that I have for him transcends the tales he tells me about all of his other girlfriends, and though I don't always agree with his choices, he knows he can talk to me about it and I won't judge.

All of this, and he gives an affordable, kick-ass haircut? I told you, I am in love.

I’ve never had this kind of relationship with a hairdresser. I was more of a stylist whore, skipping around to different people, different salons, trying to find the right person at the right price. But I guess it’s true what they say, and when you meet the right one and want to settle down, you do whatever it takes to make it happen.

Even if it means getting my haircut at an unconventional place.

Day 164's thing I've never done before was prove to my hairdresser boyfriend that I will follow him wherever he goes, and get my haircut at a bank.

When I was 8, my mom permed my hair in our kitchen. (Everything about that sentence is wrong. Accurate, but so very, very wrong). But when that disaster went down, I was too young to know any better. Plus, I was the one asking for a perm, so clearly I had questionable judgment.

Now I'm an adult. I should know that if a strange 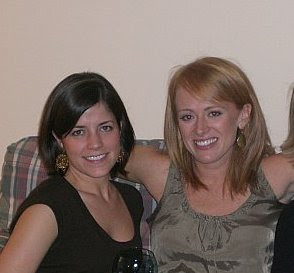 man asks me to come to his one-room shack behind a bank in the dark when it's raining I should say, "no."

Isn’t that what people in love do? They blindly follow their beloved wherever he goes?

I followed Moses from the salon where we first met to his second, which was in the basement level of Macy's Department store. That was mildly sketchy because while the place was a legit salon, no one had ever heard of it, and until I went there for the first time, I didn't even know it existed. When he called me to tell me about the third move, he said he was in the process of going out on his own, and in the interim, would be cutting hair at the bank.

I think this is also a sign that I'm in love, because that sounded completely normal and acceptable to me. I booked an appointment immediately for when I returned, making Moses the first person that I saw when I got back from my trip.

The Bank of Moses is nothing fancy. Just a room, in a bank building, that he's sharing with a massage therapist/nail technician/aestician. But it's temporary, and he still cuts great hair. What do I care if there is fluorescent lighting that washes me out and a light up clock with a picture of a rainforest on the wall?

I could hear myself convincing my family and friends that my hairdresser boyfriend really is going to go out on his own and open his own salon. This bank-space nonsense is just to save money. He's still a great guy! Who cuts great hair! If you knew him, you'd understand!

Emily used to let me know when she was getting her haircut by telling me she was going to see our boyfriend, but since Moses' location change, she and Lauren have both texted me recently saying, "I'm off to the bank!"

The Bank of Moses. That is banking you can really count on.
Posted by Stephanie Gallman at 11:00 AM